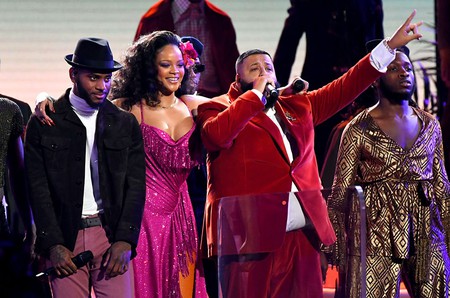 The singer, who was on stage with DJ Khaled and Bryson Tiller for a rendition of their hit ‘Wild Thoughts’, was the latest celeb to pull off the viral dance.

US producer Swizz Beatz and RiRi’s ex Chris Brown have also been spotted dancing the Gwara Gwara after it was first made popular by DJ Bongz.

Rihanna with the Gwara Gwara 🇿🇦#GRAMMYs

The DJ told TshisaLIVE: ‘I created the dance from scratch and it feels so special to have it shown on an international stage like the Grammys. It shows that Africa can make a big impact on international dance.

‘I don’t know what the next step is but I know it will be become bigger. This is a great moment for both me and South Africa.’

South Africa is so influential and relevant right now, Look at Rihanna killing i Gwara Gwara at the #GRAMMYs #ZA pic.twitter.com/AzLp7qzF73

Me when #Rihanna hit the Gwara Gwara at the end of the #WildThoughts #GRAMMYs  performance 👏🏽 #Shoutout #SouthAfrica pic.twitter.com/CAbXdvhVnx

Bruno Mars and Kendrick Lamar were the big winners with only one woman taking home a major prize – Alessia Cara for best new artist.