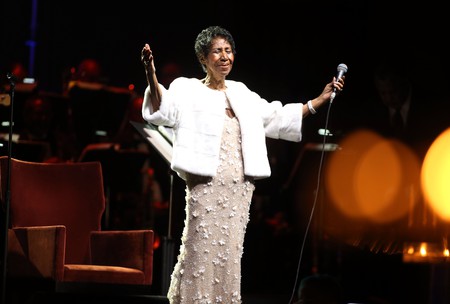 Aretha Franklin will always be remembered as a remarkable singer with the power to move listeners to tears – including one former US president.

Aretha Franklin, the Queen of Soul, was a sensational singer, possessing a voice that could move whole audiences to tears. The sheer power of her mezzo-soprano made her one of the biggest-selling musicians of all time over a career that spanned nearly six decades.

The impact of Franklin’s incredible voice can be seen during her performance of ‘(You Make Me Feel Like) A Natural Woman’ at the 2015 Kennedy Center Honors. The singer stunned the crowd, and Barack Obama, US president at the time, could be seen brushing away tears at one point during the song.

George Lucas, Gina Rodriguez, Carole King and Rosie Perez were also captured on camera singing along from the Kennedy Center stalls. As Franklin’s performance came to a close, the audience was on its feet.

This performance was about as far removed from Franklin’s humble beginnings – singing gospel in her father’s New Bethel Baptist Church in Detroit – as you could imagine. CL Franklin encouraged his daughter’s innate talent and by 14 she had learned piano by ear and released her first album, Songs of Faith, a selection of live recordings made at New Bethel Baptist Church. That was in 1956 and, after modest success throughout the early ’60s, her career really took off when she signed with Atlantic Records in 1967.

Franklin had a string of hits including ‘I Say a Little Prayer’, ‘Respect’, and ‘(You Make Me Feel Like) A Natural Woman’. She was a massive star in the late ’60s and the early ’70s until disco arrived to steal her thunder. However, a show-stopping cameo in the 1980 film The Blues Brothers (in which she performed ‘Think’ with comedians John Belushi and Dan Aykroyd) won her a new generation of fans and her 1985 studio album Who’s Zoomin’ Who? went platinum.

Franklin combined her gospel roots with R&B, jazz, blues and rock to create her own style of soul music. You can see in her 2015 Kennedy Center performance how masterfully she commanded her vocals even after 59 years in the industry, really letting rip when she throws her coat to the floor.

The singer had the most million-selling singles of any female artist. Between 1967 and 1982, she scored 10 No 1 R&B albums – more than any other female singer. Reflecting on her career, Franklin told Time magazine: “I didn’t think my songs would become anthems for women. But I’m delighted.”

Her song ‘Respect’, a cover of an Otis Redding song, became an anthem for the women’s and Civil Rights movements. Recorded on Valentine’s Day 1967 when the singer was just 24 years old, it became a declaration of independence that was urgent and thrilling.

Like her father – who was friends with Martin Luther King, Jesse Jackson and Adam Clayton Powell Jr – Franklin cared passionately about civil rights. As a teenager, she accompanied King as he toured America to spread his message of non-violence. In an interview with Ebony, she revealed: “I asked my dad if it would be OK if I went. He said if that’s what I wanted to do, he thought it would be OK, so I went out for a number of dates with Dr King. Harry Belafonte came out and of course, Andrew Young was there and Jesse [Jackson] came in and out.”

After King was assassinated in 1968, Franklin performed at his funeral. The circle was completed when, in 2009, Franklin sung the US anthem ‘Let Freedom Ring’ at Obama’s inauguration ceremony in Washington DC. The star performed in front of the Capitol Building, where millions had gathered to see the country’s first black president sworn in.

But it is the songs that Franklin will be remembered for. Although music critics have written extensively about Franklin’s work, it was Obama who summed it up best: “Nobody embodies more fully the connection between the African-American spiritual, the blues, R&B, rock’n’roll – the way that hardship and sorrow were transformed into something full of beauty and vitality and hope,” he wrote in an email to The New Yorker. “American history wells up when Aretha sings.”