Real-life Romance: Couples Who Met Their Match While Traveling

As the weather grows gloomy and February drags on, perhaps there is no greater respite from late winter than the pop of color that Valentine’s Day brings. Whether married, dating, or single, there is joy to be found in love stories—particularly when that story is a chance encounter while traveling.

It’s no secret that travel is conducive to romance—a stroll alongside the Seine in Paris, a serendipitous meeting with a handsome stranger in Buenos Aires, a late-night kiss on a beach in Panama—it’s been reported that a trip can spice up sex and even help mend a broken heart.

The following real-life romances take place in far-flung destinations, miles from the homes and comfort zones of the people who tell them. There’s Mark Choi and his story of a fortuitous airport run in with his future wife. There’s Betine Gjoelberg and the metro ride that forever changed her life. There’s Lola Méndez, for whom each date is a new adventure abroad. Each of the following stories is a reminder of how love can find you in the most unlikeliest of places.

Finding the one in South Africa… 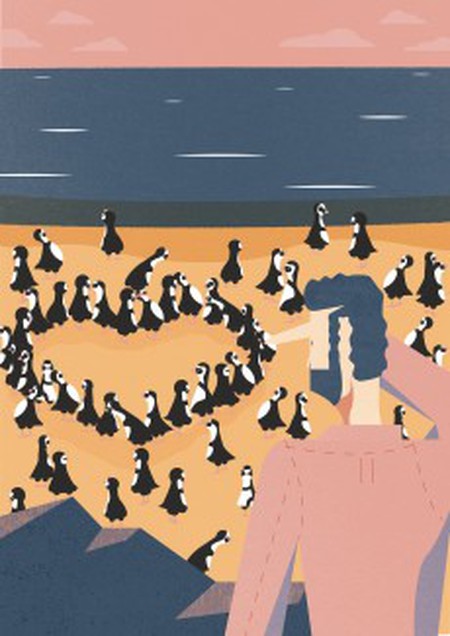 “I was on holiday with a friend of mine in Cape Town in August, and we took a drive down to Cape Point for the day to see the amazing views—looking out south, there’s literally nothing between there and Antarctica. There’s a really special spot there called Dias Beach about 10 minutes’ walk down the cliffs. The waves were enormous, and there were a few crazy people trying to surf them (bear in mind, it was the middle of winter!). The beach was empty except for a few people, one of whom was this beautiful blonde girl, and we got talking.

I thought she was amazing. Time was short and we had to leave, so we said goodbye and went our separate ways. It’s safe to say I was a little disappointed. On the way back, my friend suggested we stop a few miles down the road at a spot famous for wild penguins and half an hour later, by chance, she appeared once more with her friends. I wasn’t going to let her disappear again, so I ran over and got her number. We went for a date that night in Cape Town and the rest—as they say—is history! Our second date was actually in Munich, and our third in Barcelona.” —Ben Shacham, Director of Operations at Culture Trip

“We were co-workers in London and had become close, though nothing was ‘understood.’ Casually, she suggested I come with her to China; casually, I said yes. Hong Kong was a wall of heat, so when we crossed into Canton and the skies opened, we telepathically agreed to sit in the rain while the locals stared at two strange English people. In Guilin, we marveled at the domed karst hills, ate green oranges, and watched the sky turn pink or violet. We bathed in the Li River and afterwards we put on each other’s shirts and found a private cell in a men’s hostel for one yen a night. She wore a wide-brimmed white hat.

“Back in Hong Kong, we kissed upside-down as we leaned over the wall on the Hopewell Center observation deck. It was (relatively) safe: I couldn’t fall any further than I had done already.” —G (His)

“The Himalayas peaked far beneath our flight, streaked with pink-gold sunrise. You don’t get much higher than that. Although we did. Far from home in a strange land with an unknown language. We walked, talked, got lost. We got delayed by a typhoon. We got grubby and mosquito-bitten and rain-drenched. We loved everything about it, and eventually each other.

“I bought a lantern like the ones swaying on the quayside at Lamma Island. I dropped a bottle of snake wine on the pavement where it smashed and bled, soaking us and cutting my thumb. We made a pact to rendezvous 10 years later half way up Emei Shan—a sacred Buddhist mountain—in case we lost each other somewhere in between. I waved his plane back to London and headed for Australia. On my brand-new Walkman, I played his compilation tape very loud. These were the things… and our dreams were made.” —A (Hers)

Couples that travel together, stay together…

“When I first met Jeff in New York, I had plans to travel to London to review a couple of hotels the following month. We had been dating one month when we went out for drinks one evening and—after admittedly one beer too many—I invited Jeff to join me in London. I’ve always been a rather impulsive person, so I was surprised when Jeff matched my spontaneity and said yes!

“As a newly minted couple, we flew to London, deciding rather last minute to extend the trip to include Paris. Although I had been to France many times before, there is nothing quite like falling in love to the backdrop of Paris. We were the ultimate romantic cliché: dancing in the streets, walking down the Seine, leaving a lock on the Ponts des Artes bridge, sharing pastries by Notre Dame. Traveling together allowed us to connect in a deeper way as we faced language barriers, got lost and laughed our way through travel memories. It was the most romantic trip, and on our return to New York, we quickly decided to move in together. Our whirlwind romance only blossomed over time, and today—years later—we are still together, still travel, and are gearing up for our next big adventure to Asia.” —Nikki Vargas, Travel Editor of Culture Trip 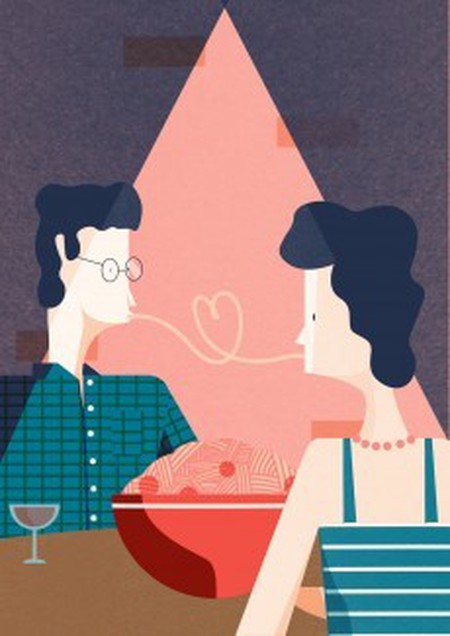 “I met my guy in Madrid last March, but left for Italy a mere three months later in May. Neither of us ever intended (or wanted) to be in a long-distance relationship, but travel kept us together. In May, we spent a romantic weekend in Bologna, eating everything in sight. In July, we went to Venice and strolled along the canals under the moonlight. He met me in Fez, Morocco in October to celebrate my birthday and I went back to Madrid for two weeks in December for the holidays. Despite the distance we’ve managed to fall in love through traveling together and exploring new cities. Our mutual curiosity and appreciation for other cultures has helped forge a deep bond between us. I am volunteering in India for six months and he plans to come visit for the Holi festival in March. It’ll be a year since we’ve met and our third continent we’ve visited together.” —Lola Méndez of Miss Filatelista.

Love in the time of backpacking…

“I met my spouse and travel partner on a train ride between Kraków and Budapest. More specifically it was a random dirt patch in the middle-of-nowhere Slovakia. It was there I saw a beautiful backpacker chase down our train. I questioned my Australian train-mates why there would be a backpacker here when they said that they knew her. Turns out she was locked out of the sleeper car and had to run from one car to the next to get in—before the train started moving again. We drank in our tiny bunk room, and I spent the night working up the courage to ask her for her email address. It was all a weird twist of fate we happened to end up at the same guesthouse in Budapest—10 years later we returned to that same guesthouse together.” —Shaun Robertson of This Life in Trip.

Meeting his future wife at the airport…

“My wife and I went to high school together. She was a year under me, and while we were acquaintances and more friends of friends back then, we definitely saw each other occasionally in random places throughout the years.

“I moved to New York shortly after college and began working here. In October of 2013, one of my friends was getting married in Texas and I was traveling back for the wedding. I was hanging out in the terminal, messing with my camera, when someone asked me to move out of the way so they could use the outlet to plug their phone in. When I looked up, I was startled to see a familiar face. My future wife instantly recognized me, and I soon found out that she was working for a client in New York and had just moved there. I immediately said that we should get together once we were both back in the city and exchanged contact information. We boarded the (same) plane and flew back to Texas.

“Lo and behold, that weekend, Hurricane Sandy hit, and we were stuck in Texas indefinitely. Making the most of our time, we decided to go on a few dates, and the rest took off from there.” —Mark Choi, Editorial and Commercial Video at Culture Trip.

Falling in love on the Metro… 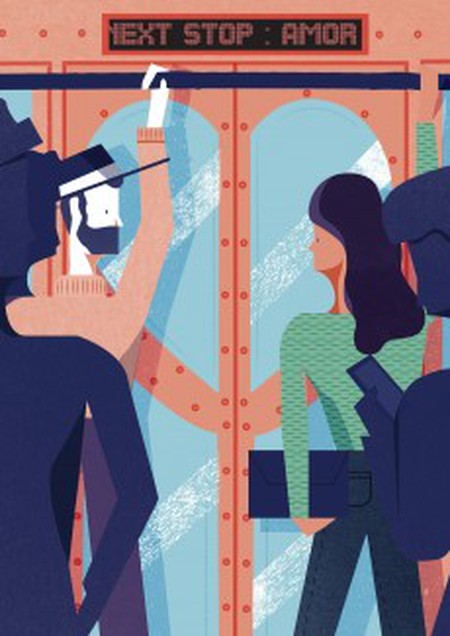 “I was waiting for the metro last year in April when I suddenly saw him. He walked right up to me and said, ‘Hello.’ I felt such a connection when we looked into each other’s eyes. All I was able to do was to smile the whole ride and look at him. He asked for my number, which I of course have him. When he went off the metro he said in Spanish ‘un beso,’ which means ‘one kiss’ and we kissed. Five minutes later, he called me just to make sure it was me. I guess we both couldn’t believe what just happened. The best metro ride of my life. Today we are married, nine months later. Love is everywhere and can be found in all countries. No matter where you are from. The person on the metro can be the love of your life. —Betine Gjoelberg of Yes Vegan Box