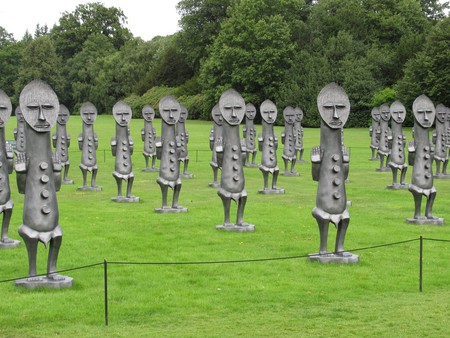 This summer, San Francisco will be a real artistic treat as the city’s Civic Center will be acting as host to The Invisible Man and the Masque of Blackness, created by British Trinidadian artist Zak Ove. The installation features 40 identical statutes, each weighing 300 pounds and standing at six and half feet tall.

The announcement was made on January 18 by the San Francisco Arts Commission. And come July, Ove’s sculpture installation will find a new home in the Civic Center.

The 40 humanoid statues will be set up in four rows of ten and will be facing San Francisco City Hall. The influence behind the statues’ look come from a Kenyan statuette that Ove was given by his father during his own childhood. The original statue has served as a muse for the artist throughout his career.

The title itself and the piece’s inspiration comes from American writer Ralph Ellison’s 1952 book Invisible Man, which follows the journey of an African man whose skin color has rendered him “invisible” to the rest of the world. The novel’s nameless narrator describes what it’s like growing up in a black community in the South and how that leads him to becoming the voice of “the Brotherhood” in Harlem, New York. The book lead to Ralph Ellison being considered one of the key writers of the century.

Zak Ove’s sculpture and the display’s original venue in London was reminiscent of the performance by playwright Ben Jonson in 1605 of The Masque of Blackness— where white actors in blackface magically transformed back into being white during the play’s climax. After its original London host, the display has visited multiple venues. San Francisco will be its first American host.

We spoke to Ove last year, where he described what the vision of his installation is trying to translate to viewers. “[The sculptures] speak about what is to be black, very African in identity, and a member of the future world, in a sense.”

The sculptures and overall display bring forth feelings of identity, race, and of being displaced.

Each statue is made up of a heavy concrete base while the bodies are made from lighter materials like resin and graphite. Each one of the 40 statues will be sitting on three-foot-by-three-foot steel plate in order to deter any harsh San Franciscan wind or earthquakes from knocking over any of the sculptures. 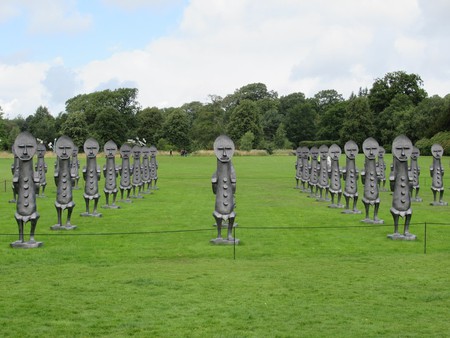 Ove’s statues are currently being hosted by West Yorkshire, England, installed in the Yorkshire Sculpture Park. The display is under the slightly altered title Black and Blue: The Invisible Men and the Masque of Blackness. In June the statues will be uprooted and make their way to San Francisco.

Bringing Zak Ove’s piece to San Francisco gave the city’s Arts Commission $90,000, an amount they received from the Mayor’s Office of Economic and Workforce Development with a mandate for more public art to be brought to the Civic Center.

The Invisible Man and the Masque of Blackness will be on display and can be visited in the Civic Center from July until October of this year.