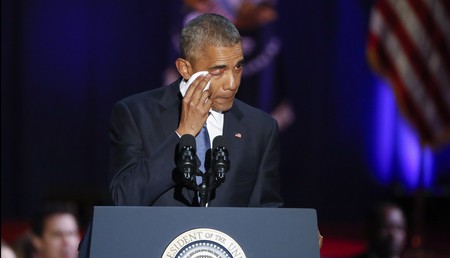 From the first family to the crowds and many across the country, hundreds were left in tears as President Obama delivered his farewell speech in Chicago on Tuesday evening.

The President only had to say the name ‘Michelle’ to get the crowd on its feet. Greeted with roars, cheers and claps, the First Lady received a standing ovation from several thousand tearful onlookers. 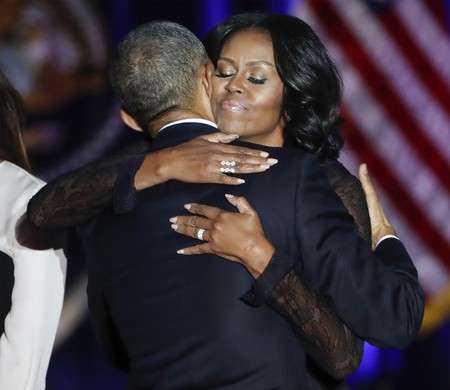 “Michelle LaVaughn Robinson, girl of the South Side, for the past 25 years, you’ve been not only my wife and mother of my children, you have been my best friend. You took on a role you didn’t ask for and made it your own with grace and grit, and style and good humor.”

Dabbing his eyes with a white handkerchief, he continued: “You made the White House a place that belongs to everybody. And a new generation sets its sights higher because it has had you as a role model.”

The emotion displayed on stage and in the audience was echoed by millions across the country on social media:

Michelle in tears
Malia in tears
Half of America in tears
Fam I'm in tears
Pops, Moms in tears
Obama don't go.

look, obama's legacy is complicated. period. but i had a black president and a black first lady for 8 whole ass years. EIGHT. YEARS. 😭

On his daughters, Obama had this to say:

“You have become two amazing young women, smart and beautiful, but more importantly, kind and thoughtful and full of passion. You wore the burden of years in the spotlight so easily…. Of all that I’ve done in my life, I’m most proud to be your dad.”

Watch the full address below: