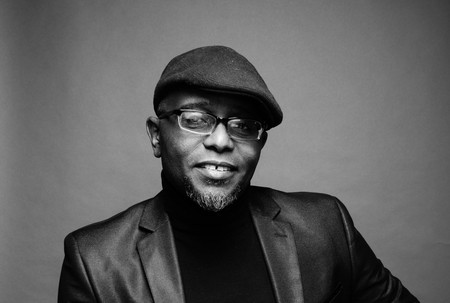 We speak to the Pulitzer Prize-winning poet Tyehimba Jess about his award-winning collection Olio.

Tyehimba Jess is a Pulitzer Prize-winning poet from Detroit, Michigan. Olio – which refers to variety acts as part of a minstrel show – explores the experience of recently emancipated African Americans in the late 19th century through an energetic mix of poetic and musical forms. Featuring a vibrant and memorable cast list, including pianist Scott Joplin, the Fisk Jubilee Singers and the McKoy twins (Millie and Christine McKoy, conjoined twins born into slavery), these are legendary stories of real people and their creative ventures.

The pioneer of the contrapuntal sonnet (poems you can read top to bottom, bottom to top, left to right, right to left), Jess’s poetry is playful, experimental and allows you to explore the characters from a number of different angles. In employing this poetic form, Jess emerges not only as a poet of originality, but a historian giving voice to those previously drowned out by slavery and suppression. We catch up with Tyehimba Jess at the Miłosz Festival in Kraków, Poland, and discuss the collection and how its themes are still relevant today. 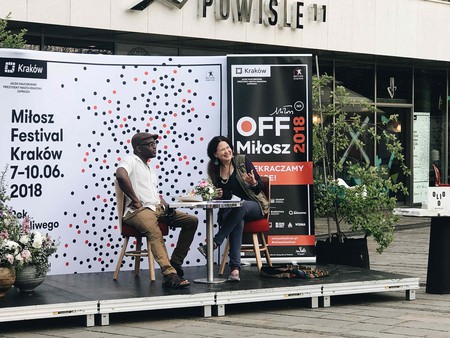 Culture Trip (CT): Your first collection Leadbelly came out in 2005. What lead you to research, write and create Olio and what were you trying to do with this particular work?
Tyehimba Jess (TJ): Leadbelly was about Lead Belly. He was born in 1885 and I became curious about the history of black musicians before they were being recorded. That led me into an exploration of the people that Lead Belly would have been listening to as a kid. I started to think about the history of black music before it had been captured by technology. It really intrigued me because the history of the music follows the history of the people, and particularly in the case of African American history – the music was taking up space where the literature would have been. I was interested in how the spiritual and the worksong came from the space of captivity into a space of freedom.

CT: The poem ‘Jubilee Indigo’ begins with the line: ‘How do we prove our souls to be wholly human / when the world don’t believe we have a soul?’ I feel this is precisely what the work is doing – humanising people that have been dehumanised throughout history.
TJ: It’s true that when we look at the assault on innocent black folks by the police state on a regular basis, when we look at the many ways in which particularly the United States attempts to dehumanise black folks – that’s still true today. But it was more apparent, more naked when these folks were creating their work. The idea of black people having souls was heavily debated at the time. The idea of having a soul, of being equally human, of being able to produce intellectually was and still is under debate, but was a more heavily debated question back when they were doing their work. All the people in the book are in their way attempting to prove their humanity or attempting to negate stereotypes. It’s funny, the contradiction in there is when you think of soul music – but still have to wrestle with the idea that black people have souls.

CT: Do you see parallels between society at the time of Olio and what is currently going on in the United States?
TJ: As I was writing the book, I was constantly shuttling back and forth between the 19th and 21st centuries. When I’m writing about the things that are happening in the 19th century, I’m thinking about what are the threads that are continuing today. And when you think about the minstrel show itself, look what just happened with Drake. He took a picture in minstrel gear and that was as late as 2008. He has this rationale for doing that. But his rationale don’t fly with most black folks. The question is how did you end up with black face on in 2008, taking this pose with the jazz hands? It doesn’t work. When you’re talking about minstrelsy, you’re talking about 19th-century black stereotypes and in the 21st century, you’re talking about tropes of blackness – and how that is playing out in various arenas like hip-hop, like politics.

CT: Could you explain how you created contrapuntal sonnets and what this form enabled you to do?
TJ: The idea behind it is to enter the conversation of history and introduce voices that had previously been unheard or silenced. So one side of the poem you have the known historical narrative and usually on the right side you have the underheard perspective. I wanted to create a space of tension between these two narratives. Tension that would result in a new narrative. It’s call and response but it’s also proclaim and retort. 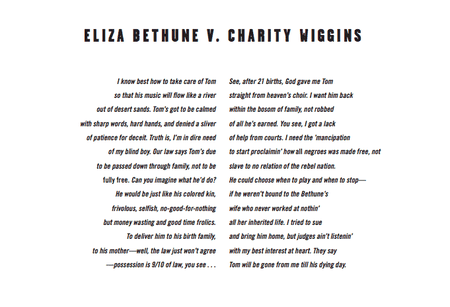 CT: One poem ‘Eliza Bethune v. Charity Wiggins’ actually takes the form of a poetic dual. You can read the left and right columns separately, but when you read it from left to right fully, it’s Charity’s voice that comes through and in effect, she wins.
TJ: She gets the last word. With the contrapuntal poems it was also really an effort to introduce an element of play in a very difficult subject, that allows the reader a different kind of agency to explore the text. The more you explore and play with the text, the more you learn from the text. So with the McKoy twins I’m trying to create a vehicle that people will remember.

CT: The opening poem to the McKoy series is not just a poem, but a piece of visual art. Why does this poem have such a different form?
TJ: This was the very first one written for the series. I was on the subway, I drew it out on my palm. This one is really just an inversion of the other forms. The other forms start in and then go out and then come back in. These go out, go in, and then come back out. But it’s concrete. They have two separate heads, a joint body and two separate bases. 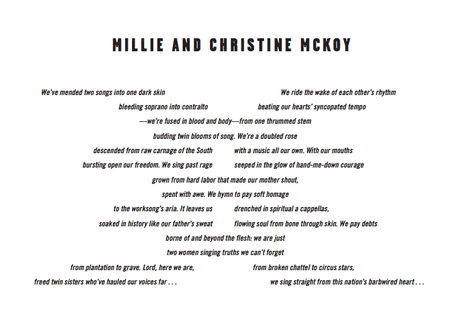 CT: Another line that stands out is when Sam Patterson says: ‘The music will do that – take pain and pour it someplace else for a while’. Do you think music or art can only provide temporary relief or can it grant total salvation?
TJ: I think it can be both. It can be a temporary remedy. But for Scott Joplin, in which the context of that line takes place, it was a pathway out of pain. He had a pretty tragic life. But he also never gave up on his art, no matter what. That to me is inspirational. When we talk about the current political situation in the United States, it’s not very hopeful. But I do find hope when I’m in the midst of writing, I do find hope when I’m in the midst of creation. And I think that’s what artists thrive on. When Sam says that, he is talking about the ability to be in the music.

CT: Olio in some ways celebrates what has been forgotten. But there’s also a line in ‘Blind Boone’s Blessings’ that says ‘bless / an infant’s too short / memory’. Do you think there is ever value in forgetting the past, as a way to survive?
TJ: I think that’s a really good question about the issue of remembering versus forgetting. How long do we remember and to what degree does that memory serve you? Or does that memory overtake everything you’re trying to do and keep you in the past? Outside of this context of Olio, there’s a lot of resistance in the black community against elements of the blues. For instance, ‘we’re up North now, you need to leave that ol’ time singing back on the plantation’. But at the same time that music is a marker of our history and a marker of our memory. So you have this internal struggle. You can’t get Duke Ellington without some gut-bucket blues.

CT: And finally, what are you reading at the moment. Or perhaps, what are you listening to?
TJ: I’m listening to a lot of Art Tatum. He was a piano player in the 1930s and ’40s, but was light years ahead of everybody else around. He was practically his own style. I listen to a lot of old blues, for me, that’s the lifeline.