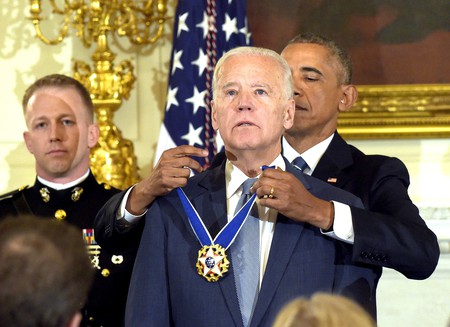 In a surprise and very emotional ceremony at the White House, President Barack Obama awarded Vice President Joe Biden the Presidential Medal of Freedom, the highest US civilian honor.

In his speech, the President announced he would award his final medal of his presidency to thank the Vice President for “faith in your fellow Americans, for your love of country, and for your lifetime of service that will endure through the generations.”

The president praised Biden for his long career in the Senate, as well as praising him for his devoted work to combating domestic violence and sexual assault. In addition, he praised Biden for campaigning for new cancer treatments in the wake of his son Beau’s death.

The surprise award elicited audible gasps from the crowds and left Biden crying tears of happiness.

Visibly taken aback, Biden said he “no inkling” he would be receiving the award.

Watch the full event below:

The perfect end to this epic American bromance, we say.