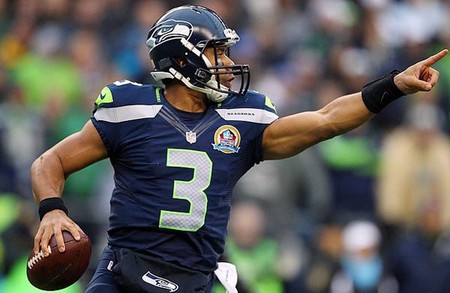 Wilson was traded to the Yankees from the Texas Rangers on Feb. 7. While the Super Bowl XLVIII champion and four-time Pro Bowl selection is in the prime of his football career, he doesn’t plan on reinventing himself as a two-sport pro athlete.

“Playing two sports has always been a dream,” Wilson told ESPN. “But at this point in my life, playing quarterback in the NFL is a job I love and a responsibility I work on and take seriously every single day. My main goal is to win multiple Super Bowls coming up, to keep winning games, and do my job at the highest level I can. But at the same time, I can also embrace the journey that baseball has taken me on and be around championship players like the Yankees.”

With Wilson temporarily trading in the gridiron for the diamond, we take a look at some of the most notable two-sport stars in United States history.

Jim Thorpe is one of the most accomplished athletes in history. He won gold medals at the 1912 Olympics in the pentathlon and decathlon before transitioning to baseball in 1913. He hit .252 in 289 games with the New York Giants and Cincinnati Reds and continued playing in the minor leagues through 1922. During that time, Thorpe also played football for the Canton Bulldogs (1915-17, 1919-20) and played for six teams in the National Football League (NFL) following its creation in 1922. Thorpe was an all-Pro selection in 1923.

Bo Jackson is the only player to be named an all-star in both Major League Baseball (MLB) and the NFL. He was selected No. 1 overall in the 1986 NFL Draft by the Tampa Bay Buccaneers, but opted to play baseball instead, signing with the Kansas City Royals. He was named 1989 MLB All-Star Game MVP. A year later, Jackson was a Pro Bowl selection with the Los Angeles Raiders.

“His Airness” retired from the National Basketball Association (NBA) in 1993, announcing he lost his love for the game and that the death of his father, James, had affected his decision. Jordan signed a minor-league baseball contract with the Chicago White Sox in February 1994, but he was unable to find the success on the baseball field the same way he dominated the basketball court. Jordan batted .202 for the Double-A Birmingham Barons before quitting baseball in March 1995 during the MLB strike. He returned to the NBA and finished his career with six championships and five NBA MVP honors, and is arguably one of the greatest basketball players of all-time.

Tim Tebow rose to prominence by leading the University of Florida to NCAA National Championships in 2006 and 2008 before playing in the NFL. While his NFL career paled in comparison to his collegiate success—though he helped lead the Denver Broncos to a playoff victory in 2012—he would leave the league in September 2015 after being released by the Philadelphia Eagles. Tebow, who then spent some time as a broadcaster, announced his intentions to play baseball, holding a tryout for all 30 MLB teams. He is currently in the New York Mets minor-league system.