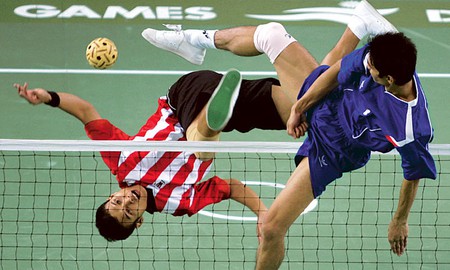 Everybody’s heard of football, rugby and tennis, but what about sepaktakraw, Archery Tag® and kabaddi? Here’s a collection of some of the most unusual sports out there.

Back in 2011, John Jackson took traditional archery and turned it on his head, creating a kind of archery-paintball hybrid which he named Archery Tag®. Participants romp around like Rambo in two teams of five, shooting each other with foam arrows. That means you, like Legolas, can get to grips with the age-old sport without testing your pain threshold.

Trampolines are bounds of fun in their own right, as is dodgeball, a sport popularised by the eponymous 2004 film starring Vince Vaughn and Ben Stiller. Some genius had the bright idea of combining the two, and the result is something special. Despite the rules essentially being the same as in dodgeball, the trampolines add an insane dimension to the “dodge, duck, dip, dive and dodge” of Patches O’Houlihan.

Zorbing itself is a relatively new sport, having been introduced to the world in 1994 by Kiwi duo Dwane van der Sluis and Andrew Akers. Somebody then took not-so-traditional zorbing and combined it with the beautiful game. The result is far from pretty. Don’t worry though; the sheer hilarity of zorb football, also known as bubble football, more than compensates for the lack of beauty.

Originating in ancient India, kabaddi has featured in the Asian Games since 1990. It’s a bit like British Bulldog, but barely. “Raiders” have to run to their opponents’ end and touch one or more of them, before heading back to their own end. Sounds simple enough, right? Not quite – the raider has to do that in a single breath, shouting “kabaddi” repeatedly as they exhale, all while the defenders try to tackle him.

Remember that badass in P.E. lessons at school that was always messing around, handling the balls you should kick and kicking the balls you should handle? What’s that – that was you? Well then, meet your new favourite sport. Sepaktakraw is just like volleyball, only you use your feet – no hands. The earliest evidence of the sport dates back to the fifteenth century, in Malacca, Malaysia, so you’ve got Southeast Asia to thank for inventing it, and us for finally introducing you. Now get out there and go crazy.

That’s right, quidditch. The game of witches and wizards is now a muggle sport too. It’s similar to the game played in the films – apart from the whole flying thing, obviously. In fact, quidditch is so much of a sport that it got its own UK premier league in November 2016, and the International Quidditch Association has been based in New York since 2010.

While cave trampolining lacks the competitive element that makes an activity a sport, we just had to tell you about this one that’s exclusive to the old Llechwedd Slate Mining Caverns in Wales, UK. Zip World’s Bounce Below is home to the world’s only underground trampoline park. Visitors can bound around the cathedral-sized subterranean den and tumble down any of four industrial slides that are twice the height of a double-decker bus.

Take volleyball, sepaktakraw, trampolines and bouncy castles; combine them all together and you’ve got bossaball. This one is mad. It’s basically volleyball, with one player from each team on a trampoline divided by a net, surrounded by three teammates on a massive bouncy castle. The sepaktakraw-volleyball combination means any part of the body can be used, so get creative.

First patented in 1892 by American inventor J.C. Stevens, skibobs have been used as a method of alpine transport for centuries. Combining all the thrills of skiing and snowboarding with the stability of mountain biking, skibobs can achieve speeds of up to 120mph, providing a mountainous rush of adrenaline.