Movie Villains, And The Skin Diseases That Make Them Scary 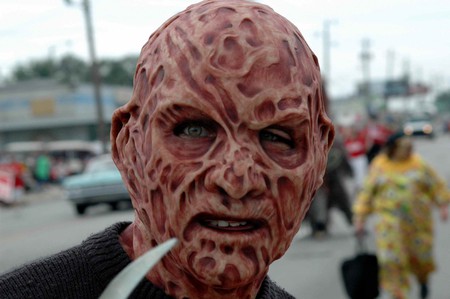 From Freddy Kruger to Dr. Evil, the “bad guys” in some of the most acclaimed movies have something very simple in common: terrible, terrible skin. According to a new study published in JAMA Dermatology, dermatologists are fed up with Hollywood films villainizing skin conditions.

“Symbolic dermatologic depictions are prevalent in film,” says the study. “Its most prominent use in film is to illustrate underlying immoral depravity.”

The researchers parsed the American Film Institute’s “100 Greatest Heroes and Villains” to evaluate hero-villain skin dichotomy. What was common among the top ten villains in film? Six of them had dermatological conditions, ranging from alopecia (hair loss) to rhinophyma (characterized by a large, red, bumpy nose). The heroes, on the other hand, had no skin problems at all.

“The unmasked Darth Vader epitomizes the use of facial dermatologic findings in combination to project evil,” the study says. “With his bald scalp, unnatural fair gray skin, periorbital hyperpigmentation, facial scars, and deep rhytides, Vader manifests sheer evil and incites apprehension and fear of the unfamiliar.”

The authors of the study say that the issue arises when moviegoers encounter dermatology patients off-screen. These films, whether they intend to or not, create a stigma for people with real skin conditions that isn’t so easy to shake.

“The problem is there has been no balance,” Michael McGowan, the then-president of the National Organization for Albinism and Hypopigmentation (NOAH), told the Associated Press in 2006. McGowan was referencing the “evil albinos” depicted in The DaVinci Code. “There are no realistic, sympathetic or heroic characters with albinism that you can find in movies or popular culture… It’s the cumulative effect of having one evil albino character after another that was disturbing to me.”

Here’s a list of dermatological conditions listed in the study, along with some of your favorite movie villains who depict them:

Dr. Hannibal Lecter in The Silence of the Lambs (1991)

Darth Vader in The Empire Strikes Back (1980)

The Queen in Snow White and the Seven Dwarfs (1937)