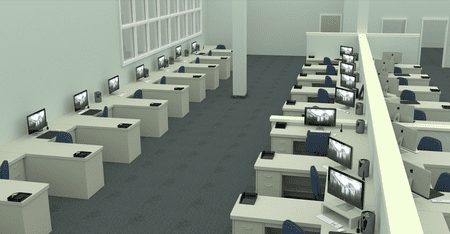 The poet and critic investigates modern office culture with the uncanny style of job interviews, tutorial videos, and TED talks.

To paraphrase Alvin Lucier: I am sitting in a room in a cushioned, ergonomic chair. Beside me is a pile of books, each mouthing a publicity letter. I am sitting in a room that is lined by long white tables, stationed by several people staring at computer screens, buds in their ears, typing up copy and content much like the kind you are reading now. Behind me is a kitchen filled with cookies and snacks, a fridge stocked with various La Croix seltzers, and a water-cooler currently devoid of a jug. The walls are papered with neon Queen Elizabeths and jungly foliage. In a glassed-in conference room, the HR manager is interviewing a potential employee; they laugh like old friends possibly over a shared joke, or possibly over a discrepancy in the interviewee’s CV. For a brief moment, the aura is dispelled, and the cozy vibe overshadowing this office space is lifted to its reality. This is the system inhabited by the modern worker.

The accomplished poet and critic Mónica de la Torre’s The Happy End / All Welcome investigates the culture of the modern office using an uncanny poetic style. Imagine a tutorial video melting as it plays or William Basinski disintegrating his own TED talk and you wouldn’t be too far from de la Torre’s hypnotic and collared verse. Taking a page from Martin Kippenberger’s installation The Happy End of Franz Kafka’s Amerika, in which the artist visually recreates the writer’s absurd vision of an American job fair, de la Torre goes a step further, looking back at the reader, as a disembodied higher-up would to a lowly employee. But first, one must be hired, an HR conundrum that de la Torre approaches with her enthusiastic carnival barking opener “Positions Available”:

Anyone thinking of their future belongs in our midst!

Anyone thinking of their future, your place is with us!

And we congratulate you here and now those who have decided in our favor.

If you decide to join us, we congratulate you here and now!

But what does it mean to be hired by poetry, really? De la Torre plays to this idea at times like a late afternoon conference room brainstorm session, and at others like the thought-line of an industrious floor manager. “Positions Available” turns into “Available Positions” a meditation on sitting, the first in a series of observations made from various (and quite real) chairs. “the days of sitting around seem extinct” she says from the perch of a Dodo chair; “Not in fetal position, curled up, quite the opposite: spread out, yet fully supported, encouraged, in fact” she writes from a Womb chair. Some chairs offer comfort and power, others prohibit them. 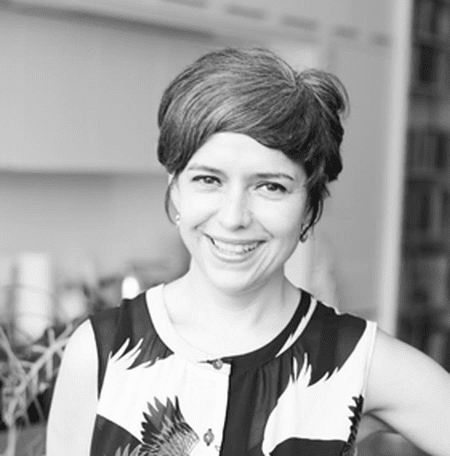 The Happy End / All Welcome is rife with these kinds of variations, which include interviews, case studies, and advertisements, but like any good use of bureaucracy, it goes with the flow of its own logic. Rather than exemplify an office-space-like Kafkaesque nightmare, de la Torre commandeers the mouthpiece management speak, making absurdist pronouncements under the guise of forms and questionnaires, as she does in the connected work “YES OR NO”, a set of eight poems that share the affirmative or negative title, and create a survey of the workplace that would be at home in David Foster Wallace’s The Pale King:

A dead office is overhead.

A living office is an organism.

Bees are not natural and that is natural enough.

If unchecked, workers dillydally to slow down operations.

Restrooms are not plazas.

De la Torre has an ingenious knack for exploring every nook and cranny of a constraint. In this, the theme of the office may run throughout the collection, but the collection does not stay seated, as it were, in the cubicle of the theme. In one poem she conceives of using found poetry for one job application (jingle writer); for a different company position (spiritualist) she conjures the texts of The I Ching and language artist Xul Solar. She lines up the duties for subversive guerrilla advertisers that includes scrambling mobile phone signals, and gets philosophical with the qualifications of a short-sighted lifeguard: “if you avert your eyes from something your eyes can’t help but see, are you seeing it or not?”

What emerges is a collection of poems that highlights how easy it is to cut-and-paste our professional lives and puts a playful and perspicacious spin on that unromantic human condition: the daily grind. Thinking back to the observed job interview, we’ve all been there, wondering what it would be like to work at a specific company. Once we’re in, no matter how cozy it might seem, we wonder what it would like to be elsewhere, where the perks might be perkier, the Popchips poppier, but by the end of the day, the entire workforce can relate on two things: the desire to go home and have a job to come back to in the morning.