Merriam-Webster's Word Of The Year Is 'Surreal', Not 'Fascism' (Just Yet) 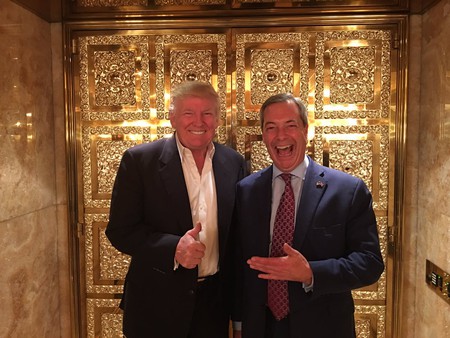 Donald Trump and Nigel Farage in what appears to be a Dubai brothel, tweeted on November 12th, 2016. Surreal. | @Nigel_Farage

It’s official: the year that saw carrot scrunge elected president, and transparency activists work with an authoritarian regime to undermine another country’s democratic process (no less) has been given its defining word. Announced on the day the electoral college is set to vote, it proves, if anything, that you and your loved ones weren’t the only people confused by the turn of events.

America’s leading dictionary publisher announced its top Words of the Year for 2016, a list led by surreal.

Their selection process is what the media savvy might call ‘data-driven,’ that is they use two criteria: a high volume of lookups and an important year-over-year increase in said lookups, both compiled from Merriam-Webster’s website. As the company is keen to tell us, the results “shed light on topics and ideas that sparked the nations interest in 2016.”

As with any statistic, however, a certain subjectivity in cut-offs remains a key factor. This may explain why there was significant buzz earlier around another word’s possible inclusion in the list. The publisher issued this rather straightforward call for help a few weeks ago, regarding the word fascism:

# of lookups = how we choose our Word of the Year.

There's still time to look something else up.

All’s well that ends well, then, as it seems sheer incredulity managed yet again to keep horror at bay. Reality is said to always hit in the end, though, so here’s to next year…

But what does surreal mean anyway, you ask? Well, according to the dictionary, it may be defined as:

You may rest assured the word’s importance has nothing to do with a sudden renewal of the so-named artistic movement, but rather with its first definition. The word surreal was a staple of the coverage of a number of worldwide events this year, starting with the Brussels terror attacks in March before going on to those in Nice in July, as well as the coup attempt in Turkey a day later (as well as, you know, all the other stuff: Brexit, Syria, Russia, etcetera…). By far the biggest spike in lookups, however, followed the U.S. election in November, and the promotion of silly putty to the highest office. 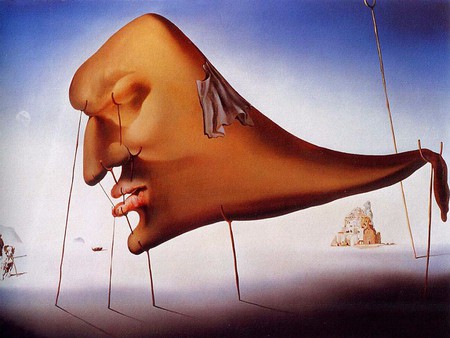 ‘Sleep’, by Salvador Dalí (1937): Mood of our times? | Courtesy of dalipaintings.com

“Spikes of interest in a word are usually triggered by a single event,” said Peter Sokolowski, Editor at Large for Merriam-Webster, “so what’s truly remarkable this year about surreal is that so many different stories led people to look it up. Historically, surreal has been one of the words most searched after tragedy, most notably in the days following 9/11, but it was associated with a wide variety of stories this year.”

As if to underline the result, another top lookup this year was bigly—a word that was never actually used. The dictionary publisher claims it originates from Donald Trump’s repeated use of the phrase ‘big league’ throughout the election, in which his peculiar pronunciation “caused many people to assume he was using a single word—bigly.”

Deplorable likewise saw a large spike in lookups after Hillary Clinton used it a noun, despite the word being an adjective. It would appear voters never forgave her for it.

Surreal joins such past winners as socialism (2012), culture (2014), truthiness (2006), and w00t (2007), which means it may well be the first truly accurate summary of an American year since the list’s creation in 2003. As for lessons, we suppose there’ll be no excuse come January for not taking the new normal seriously; though it may not always look so, we promise it is, unfortunately, very real.