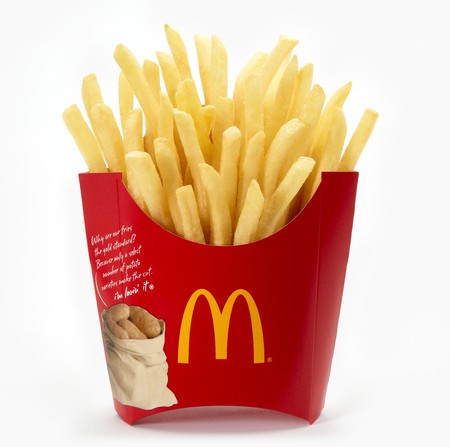 An order of "normal" fries | Image courtesy of McDonald's

McDonalds has rolled out a brand-new menu item, and so far, it sounds like not everyone’s lovin’ it.

We’ll admit it: McDonald’s french fries are one of our favorite guilty pleasures, and the fries against which all others should be measured. The flavor, the crispness, the salt, the crunch—all render them basically the platonic ideal of french fries.

So when we heard that the fast-food giant had just launched “loaded” bacon- and cheese-covered fries, our first thought was, When can we taste them?

Imagine our disappointment (and now, likely, yours too) to learn that they’re currently available only in very limited areas: certain branches in the greater Pittsburgh area, central West Virginia, southeast Ohio, and eastern Kentucky, according to Brand Eating.

It seems as though this is McD’s answer to Wendy’s well-received Baconator fries, launched almost exactly two years ago. Similar to the Baconator fries, these “loaded” fries are reportedly topped with cheddar cheese sauce and applewood-smoked bacon. Sounds tasty, right?

But in the limited markets that have the “loaded” fries, it seems not everyone’s lovin’ it.

@McDonalds what’s in the strange synthetic orange goop you’re passing off as melted cheese on your bacon cheddar fries?

Hey @McDonalds … this is why #GraftonWV needs a @Wendys – reheated nuggets and a sad excuse for an order of bacon cheese fries! 🤢 pic.twitter.com/aCqrbmHy5m

Maybe they’re in these limited markets because McDonald’s is aware they’re not quite ready for prime-time and is anticipating the need to make some tweaks. Maybe they’re not yet prepared to go up against their competition: Wendys Baconator fries, or—dare we say it—Shake Shack’s cheese fries? Either way, we’re no longer upset that we’d have to travel for hours to get our hands on an order.