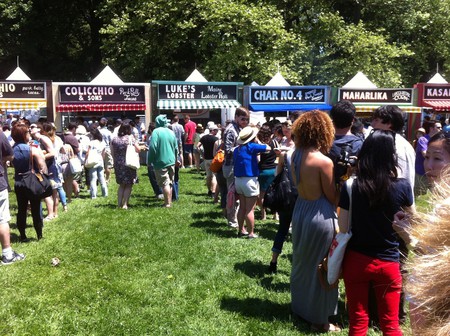 Maybe, just maybe, the better way to spend your money and time is to instead go to a good restaurant offering the type of food you’re after.

Man, we’ve been hearing about a lot of food festivals gone wrong this summer. There was the cheese festival in Brighton, England, that ran entirely out of cheese. There was the taco festival in Portland, Oregon—cancelled after its first day—that for some baffling reason offered remarkably few tacos (the handful of taco carts that were there reportedly sold out in just 90 minutes) and was accused of casual racism and cultural insensitivity to boot. Most recently, there was the pizza festival in Bushwick, Brooklyn, that offered essentially no pizza to folks who’d forked over up to $75 each in advance… and was scheduled at the same time and place as a “burger festival” that offered literally zero burgers. We could go on.

The Pizza Festival in Brooklyn = #fyrefestival. First fifty people got one bite of pizza, then they ran out. There may be a riot. pic.twitter.com/HFn9xZ2ozc

So we’re here to point out: Maybe it’s time to stop getting excited over food festivals.

We understand the appeal. On the surface, it seems like an obvious win: Pre-pay for an ostensibly unlimited amount of food (and, often, drinks), show up hungry, and stuff yourself silly. Surely you’ll eat enough to make the experience worth the ticket price, right?

In reality, though, you’re likely setting yourself up for disappointment.

You probably won’t, in fact, be able to consume a sufficient quantity of anything to get your money’s worth out of the deal. Even if the festival doesn’t run out of food, you’ll likely be joining thousands of other people in long lines for the most desirable items, which systematically limits, via simple logistics, the amount of food and drink you’ll be able to get your hands on.

Oh, you’re in in for quality rather than quantity, you say? There’s a big-name chef attached to the festival, who’s the main draw for you? Have fun with that. Even if they’re actually cooking and not just putting in a brief appearance, the sheer logistics of such events mean it’s almost certainly the worst possible way to experience that chef’s cooking. Because here’s a fact: The farther from the kitchen most foods get, the worse they become. And what you’re eating in that field or parking lot has either been pre-prepared in the restaurant’s kitchen and transported to the event venue, in which case it’s hours old, congealed and reheated, and resembling an airplane meal more closely than we’d ever willingly pay for, or prepared on-site in a generator-powered makeshift kitchen with serious limitations.

On top of this, most festivals we’ve been witness to, in person or from afar, are stunningly overcrowded. In addition to long lines for food, this also means you’re probably left with nowhere but the dirty ground to sit and eat your food, and lines for porta-potties rival those for the food stands. Is this really how you want to spend your afternoon?

If it is, a few words of advice. First, check which vendors will be at the festival. Are they ones you’re interested in? This probably would’ve let many of the Portland taco fest attendees avoid disappointment, and would’ve been a great clue that maybe the Bushwick pizza festival wasn’t legit—not a single vendor was named on its website. Second, you’ll probably have better luck at an event where you don’t have to prepay for a ticket; there’s no pressure to eat as much as possible, and if the festival doesn’t live up to your expectations, you can simply leave, having sacrificed nothing but time.

But as an alternative, might we remind you of the existence of good ol’ restaurants? They’re basically *guaranteed* to have whichever food (tacos, pizza, or whatnot) you’re after, assuming you’ve chosen your restaurant appropriately. Even if you have to wait for a table, it’ll likely be no longer than you would’ve waited in line for an arepa at GoogaMooga. The food’s almost certain to be of better quality than what you’ll find at a festival. It’s definitely a better value: For the $75 people paid to attend the sham pizza festival, they could’ve gone to the nearby Roberta’s and had a world-class pie or two plus a few drinks and still had money left over.

Don’t know where to go? We’d be happy to make some suggestions.