Dog lovers, the results are in. These are the most popular dog breeds in each of the 50 states – and you won’t believe which adorable pup reigns supreme.

It’s official, the cuddly and gentle Labrador Retriever is the most loved dog in the US, taking the title of most popular breed in all but six of the country’s states. 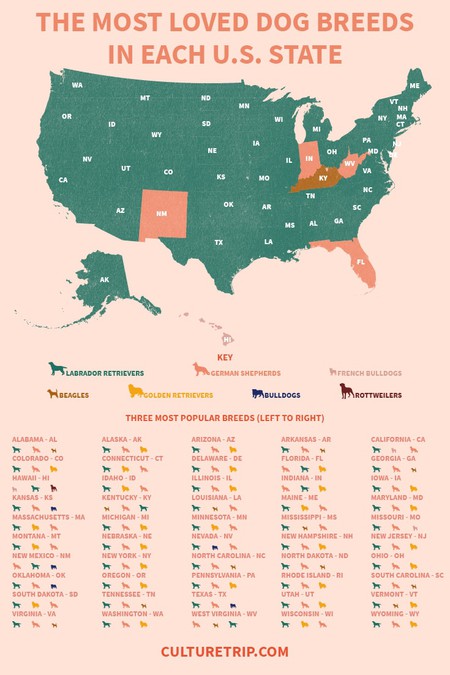 It is certainly an impressive result for the Labrador, who is known for being a fantastic family dog, albeit one who requires a lot of exercise!

Interestingly, four of the six states in which the Lab is not king (New Mexico, Indiana, West Virginia and Florida) share German Shepard as the most popular breed, whereas Kentucky goes for the Beagle and Hawaii for the ever-adorable French Bulldog.

The amazing map, created using data collated by Time magazine, also shows the second and third most adored doggos across America. Interestingly, there are only seven breeds in total that make up the whole list! These of course include the Labrador Retriever, as well as German Shepherds, French Bulldogs, Beagles, Golden Retrievers, English Bulldogs and Rottweilers.

One of the most fascinating facts the map illustrates is that even in states where Labs are not the first choice pupper, there is no state in the country where they don’t at least feature in the top three! This is barkingly good news for them.