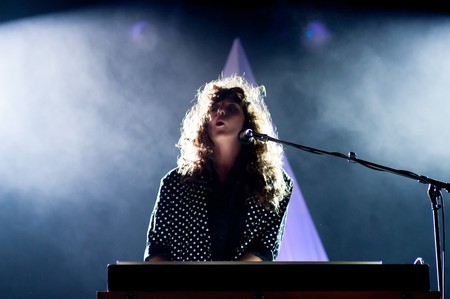 As if we weren’t excited enough about Beach House’s upcoming album, the Baltimore duo have unveiled a hypnotic new single called ‘Black Car’.

The track is a beguiling slice of woozy dream (or nightmarish?) pop that seems like a step in a different musical direction for them; it’s far darker and more macabre than their previous material.

Drenched in reverb, the track opens full of foreboding as the sparse beats and languid synths kick in, layers of sound unfolding into a tantalising spectre of a melody.

Singer/keyboardist Victoria Legrand’s hushed vocals are more like a whispered warning. Take these lyrics: ‘You want to go/Inside the gold/It’s like a tomb/But it’s something to hold.’

And if that’s not menacing enough, she adds: ‘I skipped a rock and it fell into the water’ to really chill our bones.

The band have previously spoken about how their new album 7 – their seventh studio album – is all about ‘rebirth and rejuvenation’, and how they’ve tried to be as experimental as possible. Some songs feature production that is impossible to recreate live, the duo have revealed.

‘Black Car’ suggests that this spirit of resurrection could apply to the band’s evocative sound with some surprises for fans in 7.

It’s the latest release from their new album following on from ‘Lemon Glow’, ‘Dive’ and ‘Dark Spring’.

7 is the band’s first album since their two LPs in 2015 – Depression Cherry and the surprise release Thank Your Lucky Stars.

Beach House are currently touring North America in support of 7, with the first leg scheduled to wrap in Arizona on May 13 before resuming on July 26 in Philadelphia.