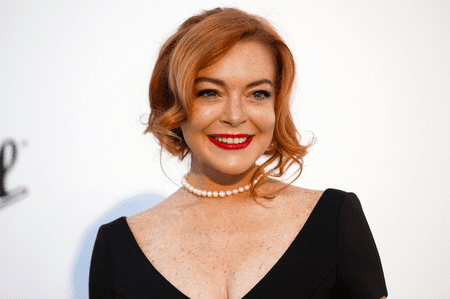 Remember back in 2011 when Lindsay Lohan was charged with misdemeanor theft for stealing a necklace from a Los Angeles boutique? Ironic, if the latest fashion rumors are true, and indeed Lohan is starting a jewellery line. Is the starlet poised to make a 24 karat golden comeback?

While yachting in Cannes, Lohan, 30, captioned two Instagram photographs #LohanJewelry. In the photos she isn’t flaunting excessive baubles (although in one photo she is wearing a cartilage earring). But what does the starlet have in store for us? Although she doesn’t drop any further hints, you will find the hashtags #blessed and #chakra in the same photographs. (Presumably #chakra references the name of the yacht — Yacht Chakra, of the SSH Maritime Yachting group — where Lohan was staying.)

Scrolling through her feed, you’ll find Lohan wearing a hot pink Balmain dress (and what seem to be hotel slippers) also aboard Yacht Chakra. The hashtag #LohanJewelry appears in this photograph as well.

According to Page Six, Lohan’s rep commented, “Something’s in the works,” though gave no further details. Previously, Lohan partnered with Pascal Mouawad, a luxury jewellery line that caters to Hollywood, but the deal never came to fruition. This was back in 2011, after Lohan had just completed a stint in rehab. Mouwad told RadarOnline, “She is very healthy and wants to get back on track and build her career.” However, the line never got off the ground.

In the past, Lohan’s collaborative fashion endeavors with Ungaro in 2009, and Civil Regime for PacSun in 2014, fell short. Her leggings line 6126 also incurred some legal trouble, according to Fashionista. Lohan did, however, successfully launch a collection for the British label Lavish Alice in 2015. Will jewellery ultimately help LiLo make a comeback? As her idol Marilyn Monroe once sang, “Diamonds are a girl’s best friend.”