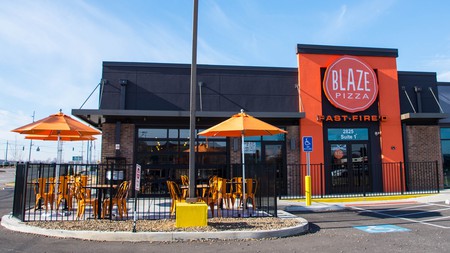 LeBron James is known for setting records on the court, but the Cleveland Cavaliers star can now add an entrepreneurial record to his gaudy list.

Blaze Pizza, a California-based restaurant chain backed by James, opened its 200th restaurant today in Ohio. Going from two franchises to 200 in four years is the fastest start for a chain in United States food service industry history, according to Technomic, as reported by Forbes.

James has been a Blaze Pizza investor, franchisee and paid endorser since 2012, often using his social media platforms to promote the fast, affordable and high-quality made-to-order pizza chain. In fact, James was even put to work under the alias Ron at the Pasadena, Calif., restaurant in 2016. The video has more than two millions views on YouTube.

“LeBron helps us punch in terms of our brand awareness well above our weight,” Blaze Pizza CEO Jim Mizes said.

Blaze Pizza finished second among the best pizza chain brands behind Papa John’s and ahead of Pizza Hut in a recent Harris Poll. James is so invested in the company, he turned down a $14-15 million endorsement contract with McDonald’s in 2015.

“We tasted the product and the product was phenomenal,” James told Uninterrupted. “I took a pie back to the hotel as well. The potential of what we could make if we put the time and effort into it exceeded what McDonald’s would be guaranteeing over the next four years. More importantly, for me, it was like ‘Oh, wow, we get to actually build this? Forget the money, we can actually build something. If it doesn’t become successful I can only blame myself because I know how good the product is.'”