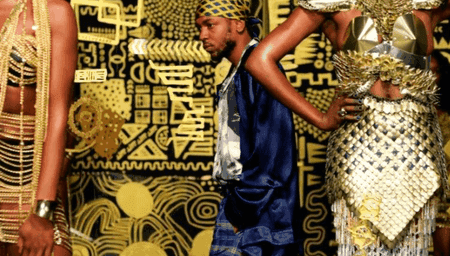 A British-Liberian artist claims her work was stolen for Kendrick Lamar and SZA’s video for ‘All the Stars’.

The video for the song, which is taken from the soundtrack for new superhero film Black Panther, was released last week.

Lina Iris Viktor says she was approached by Marvel representatives twice about using her artwork in the movie but ended up turning them down, according to The New York Times.

But images similar to the artist’s Constellations series of paintings are seen in the video around the 2.59 minute mark.

Viktor’s lawyer, Christopher Robinson, sent a letter over the weekend to Top Dawg Entertainment’s Anthony Tiffith, who produced and curated the soundtrack with Lamar, to warn him about copyright violation.

She told the newspaper: ‘It’s an ethical issue, because what the whole film purports is that it’s about black empowerment, African excellence – that’s the whole concept of the story. And at the same time they’re stealing from African artists.’

The artist, who uses digital enhancement and gilding techniques to make large-scale paintings, only found out about the video after friends called to tell her they’d seen her work in it.

The letter states the video contains 19 seconds of footage which ‘incorporates not just the immediately-identifiable and unique look of her work, but also many of the specific copyrightable elements in the Constellations series of paintings, including stylized motifs of mythical animals, gilded geometric forms on a black background, and distinctively textured areas and patterns, arrayed in a grid-like arrangement of forms.’

Viktor claimed she was more concerned about the principle rather than money.

constellations I, II, & III.
currently on view at spelman museum of fine art

‘Cultural appropriation is something that continually happens to African-American artists, and I want to make a stand,’ she said.

Black Panther, which has been tipped to become one of the biggest films of the year, is out in UK cinemas today.