Kehinde Wiley | A New Republic at the Brooklyn Museum

Kehinde Wiley (born 1977) is an American painter known for his large-scale portraits of young black men sporting urban clothing. Fielding inspiration from artist like Memling and Manet, Wiley replaces European aristocrats with black youth. Using a unique method of street casting he plucks his subjects from Brooklyn and Harlem thoroughfares. The likenesses of these young men are immortalized against ornate decorative patterns that dance around the subject without distracting from the pretentious body language. 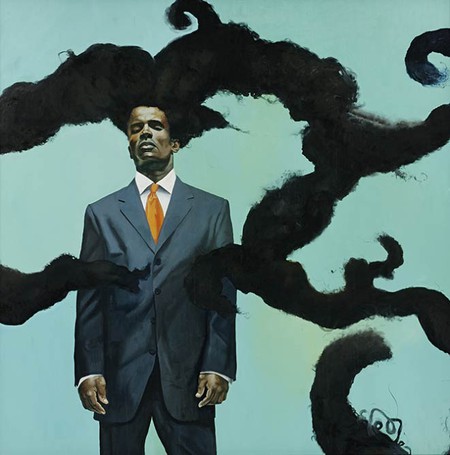 Raised by a single mother in South Central Los Angles, Wiley and his siblings came from a modest background, and realizing his talent at young age, his mother enrolled in art classes. As a budding artist he visited the Huntington Library to study classic European portraiture. While indulging in the pomp and circumstance of the work he realized that people who looked like him were absent from these iconic paintings. After graduating with his MFA from Yale in 2001, Wiley started to hone his approach during his residency at the Studio Museum in Harlem by creating work that was commentary on the absence of black faces from the works by the old masters. 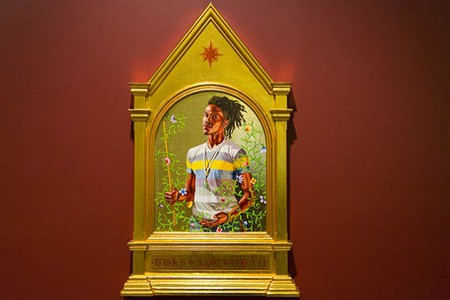 Kehinde Wiley: A New Republic is the artist’s second solo exhibition at the Brooklyn Museum. This 60-piece exhibit is a compilation of his 14-year career. On display are his iconic pieces as well as a few of his early works. The highlight of the exhibit is Wiley’s latest projects, which include pieces in new mediums. The exhibit is organized with current work bookending the breadth of his work. 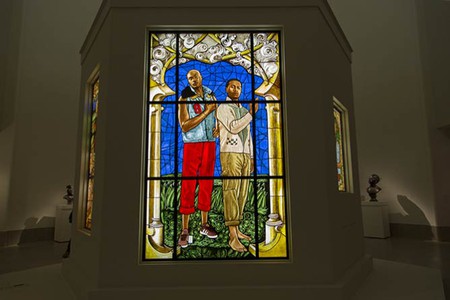 Welcoming visitors is six large stained glass windows. Called ‘the Chapel’ by curators, these pieces are a riff on the nature of classic stained glass windows of saints, heroes, and martyrs found in European churches. The character of the stained glass keeps in the tradition of Wiley’s reputation to artfully craft his work with vivid colors and a sense of depth. Curators say he has been interested in working with stained glass for the last eight-ten years, but was only recently able to find a fabricator in Prague to collaborate with. Also included in the first gallery are four pieces reminiscent of bronze portrait bust of the 18th century. The busts of young males are a commentary on the globalization of American culture. His newer work also includes paintings on a more intimate scale from his usual massive canvases. Five pieces from the Iconic series are reminiscent of 15th-century Byzantine forebears. The sitters in these gold leaf and acrylic gems mimic the venerable gestures of their religious origins. 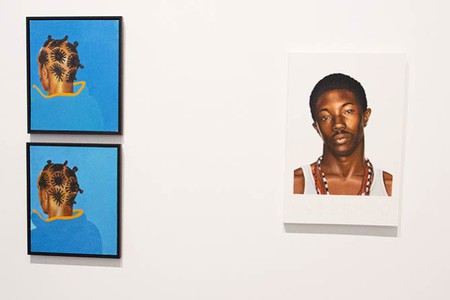 A small collection of Wiley’s early work on display includes his only video project. The piece Smile features video of four black urban young men smiling until the corner of their lips tremble. When they loose their smile they are replaced with another smiling man. On the opposite wall is his Mugshot study. Wiley reproduced a mug shot of a young black man that he found crumbled on the streets in Harlem. The piece is a commentary on the trivialization and metaphoric branding of black men that are alleged criminals. Wiley paints the young man with an innocent softness that is contrary to the concept of a mugshot. 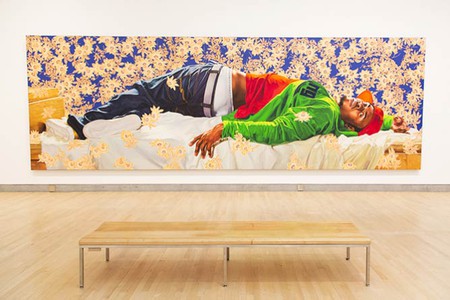 From the series Down 2008 | Courtesy Clareese Hill

When entering the main gallery there is large-scale piece from the Down series. The temptation to examine the invisible brush strokes and carefully minded detail is too much to resist. Also on display are some of Wiley’s most notable pieces like his urban rendition of ‘Napoleon Leading the Army Over the Alps’, and the late Michael Jackson in ‘Equestrian Portrait of King Philip the ll’. Any Kehinde Wiley exhibit wouldn’t be complete without including pieces from his on going World Stage series. The project explores the cultural and societal nuances of people of color in countries such as: Israel, Brazil, India, Lagos and Dakar, China, and Sri- Lanka. He uses street casting to find sitters that mirror the urban subjects he finds on the street of New York. 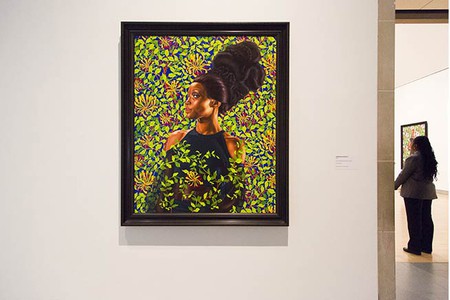 From the series Economy of Grace | Courtesy Clareese Hill

Until 2012, Wiley primary painted men. The next gallery of the exhibit is devoted to his work of women. Economy of Grace features urban black women casted in the same fashion of their male counter parts. Unlike the natural process that unfolds when working with his male subjects, his approach for working with women in this series is deliberate and calculated. Wiley carefully crafted dramatic hair and make-up that complemented the grandiose Givenchy gowns that he had designed for each sitter. 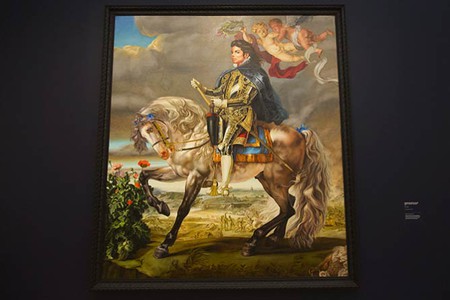 Kehinde Wiley: A New Republic is a comprehensive collection that charts the journey of a prolific African American Contemporary artist. Curators have created an experience through his 14-year career that is satisfying and informative. As Wiley takes a new direction in his work by using other mediums and reducing the scale of his works he still continues to push the boundaries of society by juxtaposing black youth and their place in current society with the staunch formality of classic art.

Clareese Grace Hill is a Brooklyn bases multimedia journalist. She has reported on Cirque Du Soleil and exhibits at MOMA.