Cover of Jonathan Safran Foer's Here I Am, designed by John Gray (gray318), courtesy of FSG and Hamish Hamilton

A collapsing marriage in America; an escalating war in Israel. These are the two prime movers of Jonathan Safran Foer’s new novel Here I Am. But how well do these conceits gel together?

In 2014, after ten years of marriage, the novelists Jonathan Safran Foer and Nicole Krauss divorced. Gossip of their implosion, as broken by the tabloid site Ratter, swirled around speculation that Foer and Krauss’s relationship had came to an abrupt halt after he confessed his love for actress Natalie Portman. The rumor was rampant enough to elicit Foer and Portman to publish a selection of their putatively platonic email exchanges in the New York Times Magazine in June. That feature received a lot of press. What probably won’t is Foer’s gratitude toward Krauss that he pens in the “Acknowledgments” of his new novel Here I Am: “thank you for being such a wonderful mother and friend.” That line was in the advanced copy and has since been removed from the finished copy.

That omission best sets up Here I Am, Foer’s first novel in over a decade, which examines infidelity and the lead-up to the most amicable divorce, at least in how it’s presented in the book, since the term “conscious uncoupling” was coined. But it is also an admission of the present, namely that the wunderkind who dazzled critics with Everything Is Illuminated and Extremely Loud and Incredibly Close is now a dad and a divorcee. “I do see this book as a departure,” Foer told the New Yorker’s fiction editor Deborah Triesman, “it is more political, less flamboyant, more dialogue-driven, less fanciful. I believe it is more mature. But then, the last decade of life was a departure for me. And I’ve certainly had to do a great deal of maturing.” Even Foer’s prose and presentation have indeed slouched toward maturity. Gone are the Jon Gray opioid covers that graced Foer’s first two novels. Gone (mostly) is the typographical graffiti that he previously deployed with abandon. 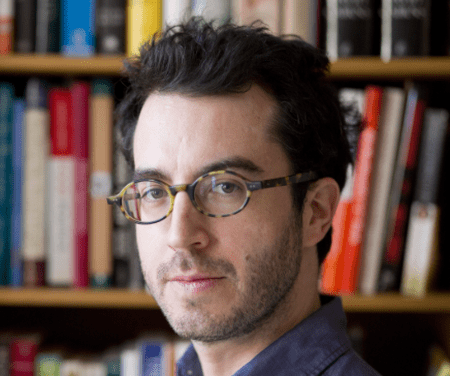 Here I Am is set in Obama-era Washington DC, primarily in the Cleveland Park home (Foer’s childhood neighborhood) of Jacob and Julia who are married with three precocious boys. Jacob was once a novelist who, like his author, won the Jewish National Book Award in his early 20s, but has since veered into writing for a “critically acclaimed” HBO television series viewed by millions. Jacob’s wife Julia is a floundering architect who dreams of building her own house but has resigned herself to taking jobs as an interior decorator, when she can get them, and filling a more or less housewife role, when she can’t. Fewer than 30 pages in, we are smacked with brief clips of porny dialogue—sexts that Jacob has been exchanging on a secret phone with one of his show’s producers. A few pages later, we find out that Jacob and Julia have become sexually estranged, a sign of a greater separation. Jacob wants intimacy, Julia wants space—neither want each other: “The withholding of sexual needs between Jacob and Julia was the most primitive and frustrating kind of withdrawal, but hardly the most damaging. The movement toward estrangement—from each other, and from themselves—took place in far smaller, subtler steps.” Except that the desire for infidelity runs, not walks, in both ways for Julia and Jacob. When she discovers the phone he has been secretly using for his sexts, she confesses her own conflicted feelings for a family friend.

“You think you’re the only one who wants to act recklessly?”

“You want to have an affair.”

Foer is selfish with and protective of Jacob—he is careful with how examines his protagonist, and a lot of detail is left uncolored. Why, for example, has Jacob, an award-winning novelist, stopped writing literature to focus on TV dramas? And what happens with his “sextual” relationship with the HBO producer, which is so quietly shoeboxed? Even Julia comes off as little more than a foil to Jacob, despite Foer’s attempts to make her a strong, independent character. It is Jacob that remains in focus. It is, after all, Here I Am, not Here We Are.

And this pronouncement is heard loudest when Foer chucks a catastrophe into the novel: 7.6 level earthquake that rips through the West Bank sending the region into instant pandemonium. Hostilities between Muslim nations and the Jewish state potboil. Israeli leaders call upon the Jewish diaspora is called upon to defend their “home,” Jacob included. Mind you, this is going on during the same week or two span of time that Julia and Jacob are coming to realize that their marriage has to end. I’m sure there’s an allegory here, or at least something that suggests that Foer is attempting to knot international with domestic (i.e. in the Kitchen) conflicts, but the this new development swallows up the subtler drama between the couple.

Over a 200 page span, Jacob is slowly coerced by his macho, jingoistic Israeli cousin Tamir—who has come to DC to attend Jacob’s son’s bar mitzvah—into flying back to Israel to take up arms. This is the same Jacob who cites his love for Fugazi—perhaps the most influential anti-war pro-ethical band of the 90s—not once, but twice. You can practically hear Ian Mackaye shaking his head while Jacob is answering a qualification questionnaire. This overwrought “what if” that brings the complicated relationship between Jewish Israelis and its diaspora (especially Jewish Americans’ identity) under the microscope is a colossal distraction from Jacob’s bigger problems back at his house: an impending divorce, a funeral, a bar mitzvah, and the euthanasia of the family dog. In other words, parsing out the complexities of the Jewish state seems besides the point when you’re pulling an Anthony Weiner on your wife.

Instead of interrogating what has cracked the heart of glass, Jacob merely steals thunder from Julia even as her life vastly improves after the divorce (the legal proceedings of which are mentioned only in passing). It’s as if Foer isn’t able to give her, to give the end of their companionship, his undivided attention. Yet when he does, there are moments of intensely felt emotion, such as a flashback to a speech Jacob’s mother gave at their wedding: “In sickness and in sickness. That is what I wish for you. Don’t seek or expect miracles. There are no miracles. Not anymore. And there are no cures for the hurt that hurts the most. There is only the medicine of believing one another’s pain, and being present for it.” Sixteen years later, the feeling is still there, and reverently felt: “He chose illness, because he knew no other way to be seen. Not even by those looking for him.” Jacob is lost, we get it, but whether Foer has put Jacob under a crisis of identity or within the maze of Foer’s own solipsism remains unclear.

Here I Am takes its title from the Hebrew story “The Binding of Isaac.” God tests Abraham’s faith by instructing him to kill his only son Isaac. “Here I Am” shouts Isaac when his father calls him to journey up the mountain. “Here I Am” shouts Abraham when an angel speeds down from Heaven shouting his name and saving poor Isaac. “Here I Amn’t” shouts Foer again and again—the clumsy pun headlines more than one chapter in this tome. So Foer is not investigating his flaws so much as testing them, grafting a pomegranate branch onto Eden’s apple tree. Instead of bearing fruit, it takes 600 pages for it to wither away. No more pomegranate. For what it’s worth, Nicole Krauss’s new book How to Be a Man will be out next year.