Is Cheerleading Really A Sport? 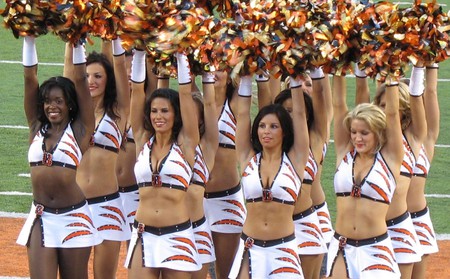 The International Olympic Committee executive board has voted to recognize cheerleading as a sport. Are they right to do so?

Official recognition matters. Status as a sport can lead to increased government funding and tax exemptions. Now, the International Cheer Union (ICU), cheerleading’s governing body, along with combat sport Muay Thai’s International Federation of Muay Thai Amateur (IFMTA), which was also provisionally recognized, will receive at least $25,000 annually from the committee and the opportunity to apply for additional grants. The ICU currently has 110 member National Federations, with four million athletes globally.

Defining sport has always been contentious. A quick Google search defines sport as an “activity involving physical exertion and skill in which an individual or team competes against another or others.” So far, so good, as far as cheerleading is concerned.

SportAccord is the umbrella organization for all (Olympic and non-Olympic) federations. They define sports as something that meets the following criteria:

•The sport proposed should include an element of competition.

•The sport should not rely on any element of ‘luck’ specifically integrated into the sport.

•The sport should not be judged to pose an undue risk to the health and safety of its athletes or participants.

•The sport proposed should in no way be harmful to any living creature.

•The sport should not rely on equipment that is provided by a single supplier.

Cheerleading meets all of the above points. The second point, citing ‘luck’, provides the sticking point to poker, where the combination of cards dealt plays a significant part in the game. That said, the same element does not dictate the ultimate outcome, otherwise there would be no such thing as good poker players and bad poker players. A game based purely on luck implies the player with the best hand automatically wins, which is certainly not the case.

Luck is one of many ways of clouding the definition of what constitutes a sport. All sport includes luck; it’s part of what makes it intriguing. Cheerleading is no different in that regard.

Cheerleading teams put together a routine, get judged and compete against other teams. They have to stay fit and conditioned. Competing at national and international level requires immense practice and dedication. It’s difficult to argue against it being a sport when you compare it with established Olympic events such as gymnastics, ice skating and diving.

Cheerleading also doesn’t carry the (unfair, we might add) laddish, drinking association of a sport like darts. The SportAccord criteria has no explicit referral to physical exertion, which is why sports like archery or shooting have been Olympic staples for decades. When playing darts a player has to carry out a similar task of aiming at a target, yet must retrieve their darts after every three throws. It’s only its unjust stigma that holds it back. Cheerleading’s healthy, wholesome image, as well as young audience and participation, are all ticks in the right box as far as Olympic approval is concerned.

Cheerleading’s origins, as a device of support to teams as opposed to a sport itself, are still prevalent. While the notion that it is still a supporting act to true sporting events still exists today, cheerleading has developed its own national and international competitions, with cheer teams competing against one another in a variety of categories.

Earlier in 2016, surfing, skateboarding, baseball, karate and sports climbing were all confirmed as Olympic sports and will make their debut at Tokyo 2020. The recognition that cheerleading and Muay Thai have now received lays the foundation for that same process. At any point over the next three years, committee executives can vote to fully recognize the sports, after which each could petition to be included in the Games.

The good news for cheerleading is that the opinion of those who matter, those that make the significant decisions that affect their sporting status, agree with them. When it comes to sports, it seems cheerleading just may well be one.