Is Amazon to Blame for the Death of Another American Bookstore Chain? 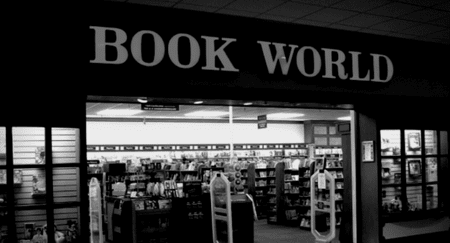 If you live in the Great Lakes region America, you would have at one point been as likely to find a Book World in a mall as you were a Journeys or a Sam Goody. But as of this past week, the fledging bookstore retail chain has announced its intent to close all 45 of its stores, thereby joining the list of defunct book chains that includes Borders, B. Dalton’s, Waldenbooks. “We didn’t anticipate being in this situation,” Senior Vice President Mark Dupont told Publishers Weekly. “I thought I’d be at Book World until the day I retired.”

According to PW, late this past October, Dupont sent around a letter to Book World’s business partners summarizing that “while the chain had been able to weather the advent of e-books, in the past 12 months sales started plummeting and still continue to drop.” This was attributed to “the downturn to the national consumer shift towards e-commerce and away from large department stores.”

Book World was a fixture in Malls across the north-central United States for over 40 years, with it’s first location opening in Rhinebacker, Wisconsin in 1976. It catered primarily to the consumer base of shopping centers found outside small to medium-sized towns— not one of its stores was located within major metropolitan area. In the wake of Border’s closures in 2011, the company made moves to expand, even opening its first story in Missouri this past September. The news of its closure, even to many insiders, was sudden.

Book World’s closing comes at a time when customers are shutting their laptops and heading back to locally owned bookstores. Many media outlets are analyzing what looks to be a renaissance for the printed book and a new golden age for the shops that sell them. In an article published by U.S. News, in March of 2016 there were 2,311 registered independent booksellers in America, a number up from 1,651 in 2009. Fairer e-book pricing, the decline of franchise bookstores for more community-based shops, notable bookstore owners that includes Ann Patchett, Judy Blume, and Emma Straub, and of course, digital ennui have contributed to the return of the local bookshop.

Inevitably, when a bookstore goes down, Amazon’s name pops up as the culprit. But it may be that the online e-commerce giant’s biggest prey these day aren’t bookstores persay, at least not so much anymore, but malls that have traditionally serviced the kinds of products that Amazon has cornered. Malls also tend to be built on the outskirts of towns rather than in their centers, making them inherently disengaged from the communities they serve. As more towns rebuild their main streets into a bucolic confluence of boutique shops and restaurants, i.e. places where people can stroll and shop, the mall loses out.

As Quartz notes, it’s exactly the mall-based bookstore that has struggled the most, and closures like Book World may reflect as much on its dependence on a dying institution to being unable to understanding how consumers are shopping. Coincidentally, the news comes on the heels of the bankruptcy of another major mall-based franchise, Toys-R-Us, which also cited e-commerce as its major undoing. “The younger you are,” Dupont told Quartz “the less likely you are to get into your car and drive to a shopping mall. In the right areas books can still thrive, but it’s becoming harder and harder…we don’t see a light at the tunnel.”