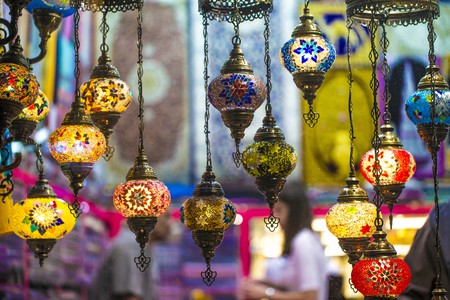 The holy month of Ramadan is a time for reflection, self-discipline, charity, and celebration. But for two first-generation American-Muslim women, assimilating their religious traditions with contemporary culture wasn’t always easy.

Afroja, an American-Muslim whose parents immigrated from Bangladesh, grew up in New York City in the ’90s. Despite the fact that there are 1.6 billion Muslims in the world today, Afroja recalls having very little décor inspiration during the month of Ramadan. Back then in the United States (and admittedly even today), Islamic holidays were still relatively unknown, even in the cultural mixing pot that is New York.

Afroja recalls the sense of slippage, or loss, that first-and-second generation immigrants can experience through assimilation. “When my parents came over [from Bangladesh], it was more about survival,” she recalls. “They dropped their culture, they dropped a lot of things they were used to because they just didn’t have access to it.”

While attending public schools, Afroja was more exposed to Christmas and Easter decorations, and saw very little Islamic design in her immediate surroundings. “In school, we learned about Hanukkah and Christmas, but my faith was unheard of. If I were to tell anyone, ‘Oh I’m fasting,’ I sounded like an alien.”

But as she got older and eventually became a wife and mother, Afroja took popular Christian-American designs and thought to herself, “How can I Muslim-fy them?”

“Instead of egg-shaped cookies [for Easter], I’ll make mosque shaped cookies or a crescent,” she says. “Instead of Secret Santa, we’ll have Secret Eid-y. It’s the same concept where you draw lots, have a budget, and get and exchange gifts.” 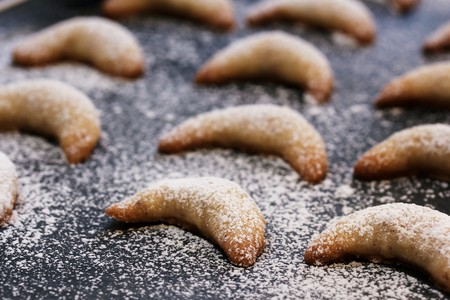 In order to get her children excited for the holidays, Afroja now decorates with lights, wreaths, and banners that say “Happy Eid” or “Happy Ramadan.” She’ll even send goodie bags and cards to her neighbors. “They are part of my community. We invite them to the feast [for Eid] and we have an open-door policy. I give the neighbors a heads up and we’ll have cultural treats and some that are typical, like cupcakes.”

It’s through design that Afroja teaches her children how to be creative, while also teaching people from other faiths the lesson of tolerance. “Every culture has its own beauty,” she says. Personally, she tries to incorporate Banglasdeshi design traditions into her own creations: “South East Asian designs tend to be more vine-y and curvy, but structurally there’s no definite design for Eid or Ramadan. It’s what the culture brings in.”

Because Islam does not associate with any idol, statue, or symbol, culture has a lot to do with how Muslims celebrate the holidays. “Religion comes first and culture comes second, but the two can shake hands,” she comments.

When asked what Ramadan means to her, Afroja says the spiritual and sacred aspects of the month are paramount: “It’s about tolerance and self-discipline. We fast from sunrise to sunset to feel closer to people who are less fortunate, who don’t have access to food and water, and to come closer to the Creator. It’s about charity. Prayer. Making sure your neighbors are okay. That’s what Ramadan is about.”

Afroja believes that Muslims should perform acts of charity throughout the year, not just during the holy month, though she admits it’s especially rewarding during Ramadan, which is a time for deep reflection. “We self-evaluate how far we have come, how close we have come to learning the Creator, not just the creation.”

Over in the Midwest, Meena, a Pakistani-American-Muslim (“The Muslim identity is the most constant for me,” she says), also remembers not having a lot of access to festive décor while growing up. Her parent immigrated to the States in their twenties and, like Afroja’s family, had to leave behind many of their cultural traditions in the transition.

“The way you celebrate Eid is by giving money, but growing up I would see my classmates getting and exchanging gifts for their big holidays,” Meena recalls. “When they would ask ‘What is Eid?’ I’d just say ‘It’s how Muslims celebrate Christmas.’”

In Meena’s attempt to get festive for this sacred month and subsequent feast, she would peruse the Christmas sections in stores, then decorate the inside of the house with lights, wreaths, and other “borrowed” items from popular holidays. Eventually, after getting married, she decided she wanted to celebrate the holy month according to her own religious traditions.

“This may be due to social media, but even up until 10 years ago, I wouldn’t notice any Muslim-Americans decorating for Eid. Now, if you go on Etsy, you’ll get hundreds of hits for decorating ideas,” she says. “Before, you might see balloons or something for kids, but you really wouldn’t see decorations.”

Now, Meena is all about finding new ways to design for the holiday: “It’s important to me to spread easy DIY décor, because it’s important to celebrate in a way that’s tangible to our culture.”

It’s important to note that there are vast differences between the ways Eid is celebrated by Muslims from different regions of the world.

“When I think of the month of Ramadan, the cool thing about going to Mosque in America is there are so many different people from different parts of the world. I’ll be praying next to a Somali-American, Egyptians, Pakistanis,” Meena says. “I was noticing this thing where a lot of the Egyptian and Moroccan people would decorate with lanterns. I realized there’s an actual word in Arabic for it: fanush.”

“From my understanding,” she adds, “you hang these lanterns during the month of Ramadan to signify there’s something special going on.”

During her search for creative and festive décor ideas, Meena came across an Instagram group called “creativemuslimwomen,” and found new inspiration. “I got exposed to all these other women who want to create art for these holidays,” she says. She began to develop her own designs, like paper lanterns, black paper wreaths with gold lettering, and even prayer cards and fasting lanterns for children, to educate them on the meaning of Ramadan.

#CMWwednesday from @mariam_paints: I always wonder how people make such beautiful messes, my mess looks more like a, well a complete mess ・・・ Share your Work In Progress or a Workspace pic by tagging our account and using CMWwednesday hashtag. 🎨✒✏📏📝📐💺📂💾📋📷✂🎭📅🎥💻🌿🍴🍝🎂🍰🛀👰💍💎 #CreativeMuslimWomen

Meena believes it’s vital to make the holiday accessible to all, regardless of language barriers. “For some of us, it’s important not to get hung up on the Arabic, because it’s not accessible if you’re not a native speaker,” she notes. “It’s important to me to incorporate the English in the lettering [of cards, calligraphy, wreath-making].”

“I want to decorate to put me in the mood to worship,” she says, “the mood to be kind.”

Non-Muslim Americans can learn a lot from the teachings of Ramadan and the celebration of Eid. These holidays remind us to be kind to one another, to respect each others’ differences, and to what the sacred texts proclaim: love your neighbor.