How to Drink Better During Passover 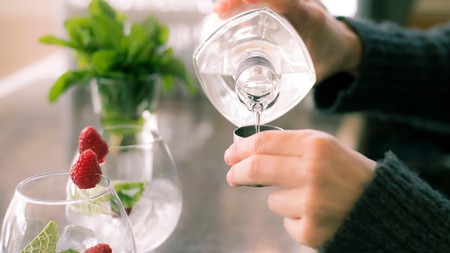 Many people think they’re stuck drinking sweet, syrupy wine during Passover week. Not true! There are plenty of types of booze out there that are certified kosher for Passover. Many more are made without grains or corn, and so are ingredient-consistent for the holiday. You can even stir yourself up a nice cocktail or drink a decent bottle of wine. Here’s what to look for.

Any holiday that begins with ceremonial tipsiness and feasting is a favorite of ours. But Passover’s food and drink constraints leave some feeling less than festive. In memory of the unleavened bread the Israelites ate while departing Egypt, everything containing leavened grains is out of the question during Passover, as are things made with rice, corn, and rising yeast.

Most obviously, this rules out beer, as well as all whiskeys, including bourbon, rye, and scotch. Most vodkas and gins are out, too, since they’re distilled from grains.

What’s left? Plenty of things! Especially if you don’t require your booze to be certified kosher-for-Passover and are okay with drinks that are merely ingredient-consistent for the holiday.

You can drink vodka distilled from potatoes: the best-known brand is Chopin, and lower-priced Luksusowa is a great option, too. Potato-based gins are more rare; look for Cold River (made in Maine) or Chuckanut Bay’s gin (made in Washington State). Going that extra step, San Francisco’s Distillery No. 209 offers vodka and gin that’s certified kosher-for-Passover.

Tequila Casa Vieja—both Anejo and Blanco varieties—has been certified kosher for Passover. Ingredient-wise, you’re generally safe with tequila labeled 100% agave and mezcal (which will always be entirely agave-based). Rum and cachaca, distilled from sugarcane, is a safe bet also. We’re told Bacardi Superior Original rum is kosher for Passover, although it’s not labeled as such; the rest generally are ingredient-consistent.

And if you’re looking to just knock back a cold one, swap in hard cider for beer. Look for a Basque-style cider—it’s got a funky, sour punch that’s more satisfying than traditional American-style sweet ciders.

Watch out for your mixers, too. With most sodas, you run into the high-fructose corn syrup issue. Fortunately, “Mexican Coke” (Coca-Cola produced in Mexico, made with cane sugar rather than corn syrup) is finding its way into many parts of the U.S. Fever Tree makes ginger beer and tonic water with cane or fruit sugar, and no corn syrup.

So what can you do with these ingredients? Plenty.

Keeping it simple, you can use Mexican Coke and rum to mix up a classic Cuba Libre.

Rum, lime juice, and a bit of sugar-based simple syrup will shake you up a daiquiri, or you can swap in tequila for the rum and add a bit of Cointreau (distilled from sugar beets, so all good there) for a margarita.

Using those Fever Tree sodas, you can easily pour yourself a gin-and-tonic, and the ginger beer will make you a dark-and-stormy (with dark rum), or a Moscow mule (with vodka and a touch of lime).

Meanwhile, plenty of wines are kosher for Passover. The good folks over at Alcohol Professor have some tasty recommendations, and a bunch can be bought online here and here. There is absolutely zero need to drink Manischewitz unless you prefer your wine on the syrupy-sweet side. If so, make sure to get the special Passover variety, though: Manischewitz says it’s sweetened with cane sugar, as opposed to its regular kind, in which it uses corn syrup. (Just to be clear: Under no circumstances whatsoever should sweeteners ever be added to any type of wine. Seriously. You have other options. Stay away from this stuff.)