How One Woman Breathed Life Into Chicago’s Theater Scene 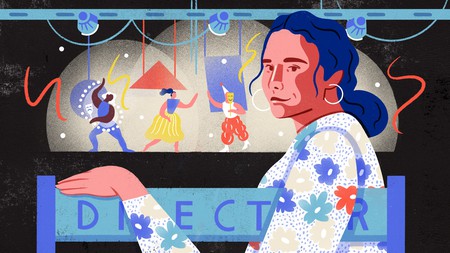 In 1920s Chicago, a young woman named Viola Spolin began studying an innovative approach to education rooted in the simple act of playing. Her belief in and commitment to this revolutionary technique would later impact the foundation of the city’s booming theater scene and lead to the creation of Chicago’s famous comedy institution, The Second City.

Viola Spolin (née Mills) was born in 1906 and grew up exploring her Humboldt Park neighborhood. Her parents were Russian Jewish immigrants, and Spolin spent much of her childhood singing and performing small plays with her large family, a group that enjoyed entertaining each other and connecting through performance. Spolin played basketball, cut her hair short and often donned male clothing instead of trendy feminine attire.

“She was an unconventional person,” says Aretha Sills, Spolin’s granddaughter and the current associate director of Sills/Spolin Theater Works.

Around age 18, Spolin attended her first workshop with sociologist Neva Boyd. At a time when progressive ideas about education swept the nation, Boyd sat at the forefront of the movement instructing people how to play. She used games, crafts, storytelling and songs to teach educators, immigrants and children ways to improve social and language skills. Boyd believed that being able to play without the limitations of destructive ideas like competition democratized learning. She would eventually write Handbook of Recreational Games in 1975, which many teachers use to this day. Spolin absorbed Boyd’s mentality wholeheartedly and began applying it to her own theatrical endeavors.

Between 1930 and 1950, Spolin studied anything and everything to do with theater, education and Boyd. Spolin earned her drama degree at DePaul University and studied acting with The Group Theatre in New York in the early ’30s. By 1934, she was back in Chicago running The Educational Playroom, a joint home and school devoted to supporting divorced, working mothers and their children.

In 1939, Boyd herself recommended Spolin for the Works Project Administration (WPA), a government agency developed through the New Deal to employ work-hungry folks to complete public infrastructure projects. The WPA hired Spolin as a drama supervisor, where she conducted improvisational explorations with immigrants and children until 1941.

In 1948, Spolin opened the Young Actors Company in Hollywood (where she lived for much of World War II) before returning to Chicago in the mid-1950s to direct her son, Paul Sills, in a play with the theater company he built using Spolin’s ideologies, the Playwrights Theatre Club.

In short, it was a busy couple of decades. Things weren’t about to slow down, either.

The Second City is born

Paul Sills, Spolin’s son and an actor who spent much of his childhood participating in his mother’s educational theater games, decided in the mid-1950s that everyone needed a taste of improv. He once again channeled his mother’s approach to playful games, spontaneity and democratized learning to build the Compass Players, a small company of actors that would soon become The Second City. Sills had his players improvise scenarios to develop scripts for hysterical, thoughtful and invigorating scenes. On December 16, 1959, The Second City hosted its first sketch comedy revue. Audiences went berserk – it was an instant hit.

Sills ended up directing the first six shows produced at The Second City using the winning format developed through improv games: play, improvise, write down the best moments and turn them into a full sketch comedy revue. The same format is still used for The Second City’s shows today. He also invited his mother to teach games and workshops to his performers.

Spolin soon became director of workshops at The Second City and spent several years expanding her reservoir of games, accumulating notes on the most successful exercises and refining her philosophy on acting, improv and education. This work would turn into her groundbreaking book, Improvisation for the Theater (1963).

Turbulence and The Game Theater

Though her work is highly regarded by the institution today, the relationship between Viola Spolin and The Second City has had its ups and downs. Her work emphasized the journey from play and spontaneity to finished product; the destination mattered less than the process to her.

“She was an educator first,” says Aretha Sills. “She was all about the process.”

In search of more creatively fulfilling projects, Paul Sills and Spolin opened the Game Theater in 1965 after splitting from The Second City. This is an oft-overlooked milestone in Spolin’s life, probably because it was not a commercial success, though it dramatically impacted her development as an actor, educator and director. The Game Theater was a community theater in the truest sense of the word; audience members were invited on stage to participate in games with the performers. Many obliged.

According to Aretha Sills, Spolin’s approach to education and theater stemmed from “an observational attitude, not [a] clinical” one. Spolin had an uncanny ability to observe the human condition, identify moments of confusion or discomfort, and immediately create a game to remedy the problem organically. Again, the focus remained for Spolin on the process, not the performance.

“They were bohemians, radical free spirits who wanted nothing more than to liberate human beings from their worst impulses,” says Aretha Sills about the Game Theater. “[Spolin’s] soul was there.”

Today, visitors to The Second City’s website are greeted with an unabashed nod to Spolin’s work and her crucial contributions to the theater’s success. Though she is glad The Second City acknowledges and celebrates Spolin today, Aretha notes that it’s still important to recognize the fact that a woman originated this work and experienced rejection, but was not deterred from working in what she believed in most.

Modern educators and employers are turning more and more to Spolin’s work to teach students and employees how to effectively communicate, handle workplace stress and become better salespeople, among other things. The Second City has a department titled Second City Works solely dedicated to Spolin-based education and workshops with corporate entities.

Kimmie Warner currently teaches Spolin’s work at the Institute for Leadership Excellence and Development at the University of Illinois at Chicago (UIC). Warner, who herself studied and taught improv at The Second City, firmly believes that adhering to Spolin’s theories fixes even the most daunting confrontations. “It rewires your communication,” she says.

As Warner tells it, after the dean of UIC’s business school took an improv class, he decided those were the skills necessary for business students to succeed. The school now has six full-time employees teaching Spolin’s work, proving play not only teaches social and language skills, it improves communication, confidence and mutual understanding.

Viola Spolin passed away in 1994 at the age of 88, though Aretha Sills insists, “She was never an old person … Not warm and cuddly, but sharp and insightful.”

Despite this characterization, Spolin always firmly believed every individual had the capacity for play. Talent meant nothing to Spolin; it was all about one’s ability to relinquish control and let joy take over.

It makes sense then that “there was always a case of champagne in her house,” according to her granddaughter. “She was ready to throw a party at a moment’s notice.”