How 'BlacKkKlansman' References Racist Films To Make Its Points 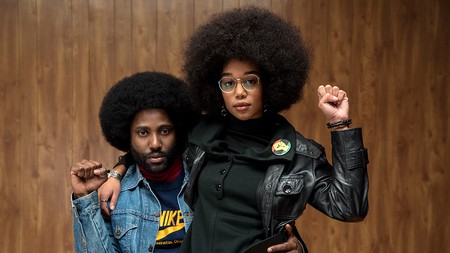 In the frenetic hurly-burly of BlacKkKlansman, nothing is more impressive than director Spike Lee’s harnessing of classical cinema to show its collusion in fostering white supremacism.

BlacKkKlansman begins with a well-known clip from Gone With the Wind (1939): Scarlett O’Hara (Vivien Leigh) picks her way among the Rebel dead and dying in Atlanta in 1864, the camera pulling back to show the vastness of the Southern sacrifice and the Confederate flag fluttering in the breeze left of frame. Then Lee cuts to a mocked-up vintage film of segregationist leader Dr Kennebrew Beauregard (Alec Baldwin) spewing a tirade of hate – jokily undermined by his muffling of his lines – as shots from The Birth of a Nation (1915) flicker behind and on him.

The irony here is that the footage from DW Griffith’s film – a visually innovative and foully racist landmark in film history – obscures the face of the bawling Beauregard. In contrast, Lee shows the faces of black college students at a Black Power rally looming out of the darkness of the hall and revealing their beauty and humanity. The guest speaker, Civil Rights activist Kwame Ture (Corey Hawkins), recollects how as a kid he watched Tarzan movies that applauded the white king of the jungle’s beating up of manifold African foes.

Midway through BlacKkKlansman, Stallworth, still undercover, goes for a walk with Patrice Dumas (Laura Harrier), the Black Power activist with whom he is gently forging a romantic relationship. As they proceed up a concrete path beside a stream, they discuss the merits of various blaxploitation actors, among them Pam Grier; here, Lee floats in disembodied posters from the actors’ star vehicles. It’s a pure meta moment that celebrates empowering black cinema and cheerfully disrupts the narrative flow. 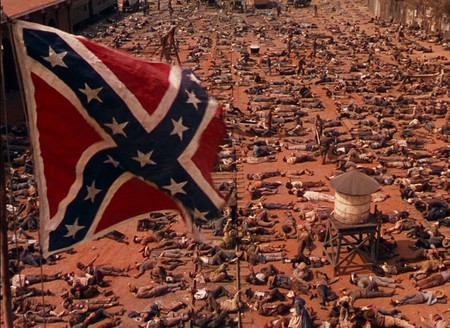 In the movie’s finest passage, Lee cross-cuts between Klan members guffawing, hollering and guzzling popcorn as they enjoy a Saturday morning screening of The Birth of a Nation, and an elderly man (Harry Belafonte) recalling a friend’s lynching for an audience of black students and activists. The friend was Jesse Washington. In a holiday atmosphere in Waco, Texas, on May 15 1916 – the year after The Birth of a Nation was released – 18-year-old Washington was stabbed, castrated, had his fingers and toes cut off, and was burned alive for two hours. Showing photographs from the lynching, Lee underscores the obscenity of Griffith’s hateful propaganda film, which directly stimulated the Klan’s revival.

Lee has drawn on The Birth of a Nation and the “subtle racism” of Gone With the Wind before. As an MFA film student at New York University in 1980, he made a 10-minute short, The Answer, about a young African-American filmmaker hired by a Hollywood studio to shoot a $50 million remake of The Birth of a Nation. It was Lee’s sardonic response to having been shown Griffith’s film by his professors. 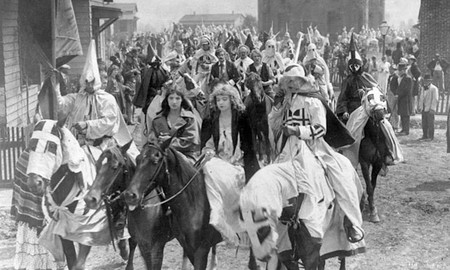 Elsie Stoneman (Lillian Gish, center) rides with the Klan in 'The Birth of a Nation' (1915) | © Epoch Producing Corporation

“They taught us all of the cinematic innovations DW Griffith had come up with, but they left out everything that had to do with the social impact of the film,” Lee recently told Ebony magazine. “That this film re-energized the Klan. The Klan was dormant, it was dead, and it brought about a rebirth. Therefore, because of the rebirth of the Klan, it led to black people being lynched, strung up, castrated and murdered, but that was never discussed.”

Lee concluded his 2000 film Bamboozled with a montage of clips showing how African-Americans – often via white actors in blackface – have been caricatured in Hollywood movies. It included shots of stereotypical characters played by Gone With the Wind’s Hattie McDaniel and Butterfly McQueen. In a brilliant bit of irony, BlacKkKlansman’s lethally plausible David Duke (Topher Grace), who was National Director of the Klan in the 1970s, waxes nostalgic for McDaniel.

The montage that ends BlacKkKlansman is not from movies. It was assembled from recent news clips from the riot provoked by white nationalist protesters in Charlottesville, Virginia, in August 2017, including footage of the car speeding into counter-protesters – and President Trump’s non-committal response to it. That this footage is the direct progeny of The Birth of a Nation and Gone With the Wind is self-evident.