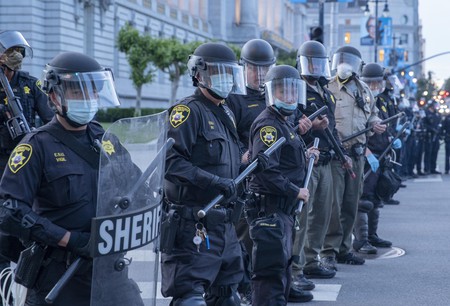 Police out in force during a protest in San Francisco on May 31, 2020, against the death of George Floyd four days earlier, in Minnesota | © Photo by Liu Guanguan / China News Service / Contributor / Getty Images

With growing anger seeing protests, international outrage and calls for action in the aftermath of another loss of a black life at the hands of a police officer in America, here’s how you can make your feelings known.

On May 25, in Minneapolis, George Floyd was confronted by four police officers who were called to the scene by a grocery clerk. The ensuing events, which were filmed, show Floyd, 46, lying face down on the street, pleading “I can’t breathe, Officer” as police officer Derek Chauvin kneels on his neck. Chauvin’s fellow officers don’t intervene. Meanwhile bystanders yell at the officers to let Floyd breathe. Floyd never regained consciousness, and was pronounced dead at a medical centre soon after.

What makes this tragic sequence of events all the more disturbing is that it is not an isolated incident. The subsequent criticisms of an establishment that has fostered such a hostile environment for black people across America has been dramatic – and global. Protests have been held around the world calling for an end to this senseless loss of life, as well as highlighting centuries of oppression against minority groups. Above all, the message is loud and clear: Black Lives Matter. 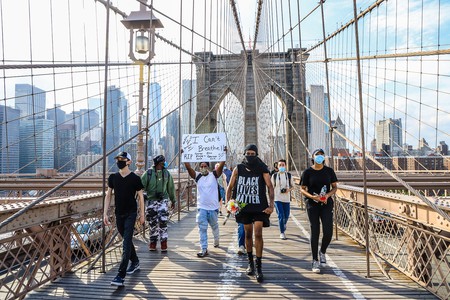 The immediate impact of what happened in Minnesota has been felt by Floyd’s family. A GoFundMe campaign has been set up by Philonise Floyd, one of the victim’s brothers. The page outlines how donations will be spent and is an excellent resource to learn more about the Floyd family.

A lot of social media has been flooded with people wanting to help those who are taking direct action and hitting the streets to make their feelings known. The Minnesota Freedom Fund is working with lawyers to help provide bail to and represent those arrested during the protests. A similar fund, the Brooklyn Bail Fund, has been set up in New York, calling for donations now.

A wider fund has also been established to help the Black Lives Matter movement and end white oppression.

At the time of writing, Officer Derek Chauvin has been charged with second-degree manslaughter and third-degree murder. The three other officers present have been fired from the police force but have had no further action taken against them. JusticeforFloyd is calling for signatories to a petition demanding that all those responsible for Floyd’s death face legal proceedings.

A separate petition is calling for the attention of Mayor Jacob Frey and DA Mike Freeman of Minnesota. This call to action, launched by 15-year-old Kellen S, is the most signed petition in the history of Change.org.

There are a number of protests being organised around the world, although many countries are still recommending social distancing due to coronavirus. Protesters in London over the weekend were advised to wear face masks and observe other basic measures to avoid the spread of Covid-19.

Most of us have been watching the protests via social media. Although online platforms have proven to be an excellent source of citizen journalism, it is important to be aware of what is being shared. Avoid sharing any videos or photos that expose the identity of individuals. Also, be aware that legal action can be taken against those inciting violence or criminal behaviour.

Do make your feelings known, however.