Here Are the Top Titles on Netflix in July

Netflix’s US July lineup is a little thin. It’s bolstered, however, by Orange Is the New Black season six on July 27 and Shameless season eight on July 28—plus the dozen films and series listed below.

Imported from USA Network, where it was a smash hit last year, The Sinner—consisting of eight 45-minute episodes—is a superior psychological mystery thriller. Jessica Biel plays Cora, a young mother, who for no obvious reason stabs a stranger to death on a beach. Bill Pullman is Detective Harry Ambrose who, assigned to figure out why she did it, delves into her past and her memories. Watch it before season two, which features Ambrose in a new case, starts on USA on August 1.

Derek Cianfrance’s non-linear 2010 marital drama drew standout performances from Michelle Williams and Ryan Gosling. The writer-director’s decision to cut between a young Philadelphian couple’s courtship and the demise of their relationship made this a heartbreaking movie most people can identify with.

Anne With an E

Irish actress Amybeth McNulty returns as Anne Shirley—beloved adolescent heroine of Avonlea, Prince Edward Island—in the second series inspired by Lucy Maud Montgomery’s Anne of Green Gables. The ‘E’ clearly stands for ‘enthusiasm’, of which Anne has bucketloads. This is the most authentic TV adaptation of Montgomery’s novel.

It may not be National Velvet, but Free Rein is a refreshingly old-fashioned children’s show about a 15-year-old girl from L.A. who develops a bond with a horse when staying in her mother’s British island hometown. Jaylen Barron returns as the protagonist Zoe in the second season of 10 half-hour episodes. 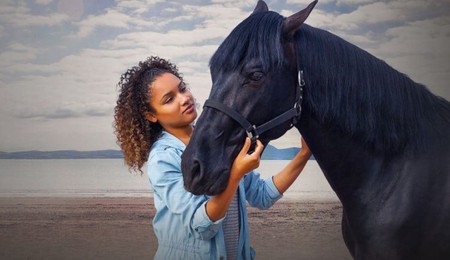 Based on Vikram Chandra’s 2006 novel, season one of Sacred Games is a propulsive Indian thriller series—eight one-hour episodes—with a strong noirish flavor. Saif Ali Khan stars as surly Sikh cop Sartaj Singh, no respecter of authority, who learns of the whereabouts of Mumbai’s most evil crime lord, Ganesh Gaitonde (Nawazuddin Siddiqui). Meanwhile, the whole city will go up in flames unless Singh can prevent it.

This Brazilian comedy series created by Felipe Braga stars Emanuelle Araújo as a 1980s child star who refuses to relinquish the idea of being an adult celeb. Douglas Silva plays her long-suffering hubby. Samantha! looks as effervescent as its likeable protagonist.

The Legacy of a Whitetail Deer Hunter (2018)

Celebrity TV hunter Buck Ferguson (Josh Brolin) takes a weekend trip into the North Carolina wilds to bond with his distinctly urban 12-year-old son, Jaden (Montana Jordan), who lives with Buck’s ex-wife (Carrie Coon). Buck’s tactless cameraman Don (Danny McBride) comes on the trip, too, so he and Buck can make a reality TV special of the hunt, during which it’s hoped Jaden will bag his first whitetail deer. Unsurprisingly, things don’t go according to plan in this outdoors comedy directed by Jody Hill.

America is gradually being blown to smithereens, so Will (Theo James) must drive across country with his antagonistic father-in-law, Tom (Forest Whitaker), to rescue Will’s pregnant wife Sam (Kat Graham). Director David M. Rosenthal and his team have created some staggering CGI for this tense apocalyptic thriller.

Lone Scherfig’s drama about a gifted high-school girl who neglects her studies when she takes up with an emotionally shallow con man (Peter Sarsgaard) was the film that deservedly earned Carey Mulligan an Oscar nomination and made her a star. Adapted by Nick Hornby from Lynn Barber’s novel, it co-stars Olivia Williams, Emma Thompson, and Rosamund Pike—the latter excellent as the glamorous but dim girlfriend of another crook (Dominic Cooper).

Is Iliza Shlesinger the Liz Phair of stand up? The scalpel-sharp feminist comic returns to Netflix with her fourth special. She will hopefully bring her snorting, wheezing “party goblin” with her. 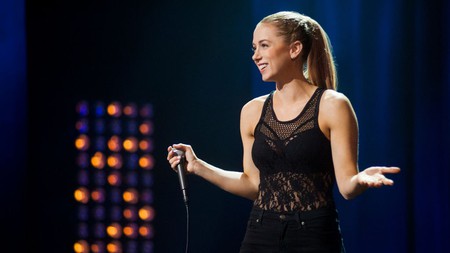 Universal Pictures pulled Extinction from its January release schedule without explanation. Netflix, which bought the Ben Young-directed sci-fi horror thriller, obviously thinks it has enough streamable potential to become a summer hit. Michael Peña plays a man who has recurring dreams about losing his family, then discovers an inner strength when his nightmare comes true and an alien force attacks the planet. Lizzy Caplan (Cloverfield (2008)) plays his wife.

Kirby Dick’s latest documentary, which was screened at the Tribeca Film Festival, sounds loud alarms. It investigates dangers in the $400 billion medical device industry. Insufficiently tested devices—such as a birth-control appliance and a vaginal mesh—have caused horrific, life-ruining problems for users. The film’s survey extends to robotic surgery, which has also been responsible for medical tragedies. Shamefully, manufacturers and officials of the US Food and Drug Administration refused to be interviewed for this essential film.

"The Bleeding Edge" | © Netflix
Give us feedback