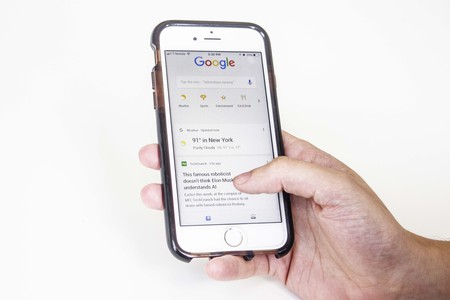 Google has released an update to its flagship search app, adding a personalized stream of information and news which works similarly to Facebook’s news feed.

The Google search app, which is available on both iOS and Android, previously featured ‘Google Now’ underneath the search bar, a predictive search feature which also featured the weather, sports scores, and other information.

But that has now been dropped in favor of the feed, which Google hopes people will check habitually in the same way they would Facebook and Twitter. The feed will initially only be available on the app, but there are plans in the future to overhaul the Google homepage to include it.

When users search on the app there’ll be an option to follow the topic of the search, which will then be added to the feed. Feeds can then be customized by tapping on the three dots next to a subject. Users can also tell Google they’re done with a story or topic, but can’t follow publications.

The feed, at first glance, seems effectively tailored. A Google version of a news feed has the benefits of being able to draw on your info from all Google products, so it can tap into your calendar, your search history, your favorite Youtube videos. For me, the feed gives me stories on augmented reality, soccer, some politics, and Youtube videos on a video game I’ve been waiting to be released.

One of the biggest threats to Google’s search business, which is its most profitable, is the prospect of more people going straight to apps like Facebook and Twitter rather than searching for things in their browser or on the Google app. The new app is available in the U.S. today, and will be rolled out internationally over the next few months.