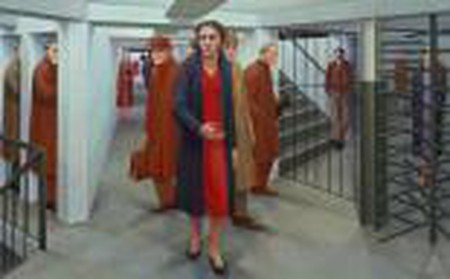 George Tooker Jr. was born in Brooklyn in 1920 and died in Vermont in 2011. During his long career he would create a distinct niche within the modern art world with his dreamlike, surreal paintings which expressed the anxiety and melancholy of his age. 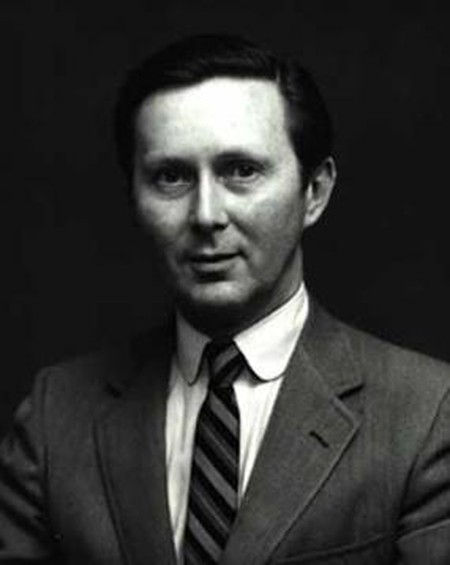 George Tooker was passionate about the arts from an early age and studied painting with a local artist before going to the Phillips Academy in Andover. Following his parents’ wishes, he attended Harvard and enlisted with the Marine Corps after his graduation in 1942. He was soon discharged on medical grounds, which lead him to enrol at the Art Students League in New York. There he met the painter Paul Cadmus, a friendship that turned out to be decisive for his career. It is Cadmus who introduced Tooker to the egg-tempera technique that would become his trademark. This meticulous traditional Renaissance method generates a rich texture but requires a slower style of painting, perfectly suited to Tooker’s contemplative personality (the artist painted less than 155 works in his life).

In New York, Tooker experimented on Masonite board and wood panels, producing beaming matte surfaces that he complemented with diaphanous colours. The painter was encouraged by Cadmus’ exuberant homosexual paintings and began tackling this aspect of his own identity through his work, perhaps as an expression of his inner apprehensions. In the spine-chilling Children and Spastics (1946) for instance, a group of violent, mocking children bully three pale and effeminate men (see below).

In the 1940s, Tooker met his life-long partner, the painter William Christopher. At the time, he was supporting his art practice by selling custom-made furniture in Manhattan. By the end of the decade, the artist had settled on a particular style, the egg-tempera, and the various themes that would inspire his work for the rest of his life: grief, alienation, love, aging, death, sex and religion. 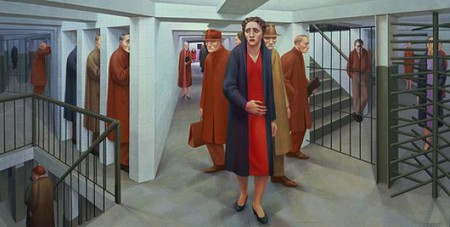 Tooker met the American painter Jared French through Cadmus. French was fascinated by Jungian archetypes and ancient Etruscan and Greek arts. This influenced Tooker to embrace a more mythical and symbolic approach to his subjects, hence his association with Symbolism and Magic Realism. Furthermore, Tooker developed an interest in Italian Medieval Renaissance Painting while visiting Europe with Cadmus and French in 1949. Subsequently, Piero della Francesca and Paolo Uccello, along other Quattro cento artists, inspired his rigorous use of geometric shapes. When Christopher died in 1974, Tooker found comfort and shelter in the Roman Catholic faith – his family was Episcopalian but he had never practiced religion himself. As a result of this spiritual crisis, more religious themes began to emerge in his paintings. He notably produced an altarpiece titled The Seven Sacraments (1980) for the church of Saint Francis of Assisi in Windsor.

Tooker constructed a mysterious world away from the mainstream: a narrative filled with a sense of anxiety and dehumanization. His anonymous yet strangely familiar figures seem to glide in an enigmatic, timeless world even when depicted in a contemporary bureaucratic environment such as a waiting room. Their smooth mask-like faces and subtle body language alienate these subjects from their surroundings, capturing modern anxieties such as the individual’s relationship to society and loneliness. In 2007, Tooker was awarded the prestigious National Medal of Arts for his works, mesmerizing and haunting paintings that truly expressed the torments of an era. The acclaimed artist is represented in major museums and galleries in the United States, including the Museum of Modern Art, the Metropolitan Museum of Art, the Whitney Museum of American Art, the Hirshhorn Museum, the National Museum of American Art and the Brooklyn Museum.