From Sugar to Shawty: The Evolution of U.S. Pop Lyrics

From the rise and fall of disco to hip hop’s ascent over rock, U.S. pop music has undergone seismic genre shifts, not least in their lyrics. Culture Trip charts how over the years profanity has stolen the limelight from terms of endearment, while pet names, though always prominent, continue to reflect the mood of the day.

We first examined the lyrics of each No. 1 song from 1960 (Jim Reeves’s “He’ll Have to Go” — technically the no. 2 song, the top track “Theme from a Summer Place” by Percy Faith is an instrumental arrangement) to 2016 (Justin Bieber’s “Love Yourself”) on the Billboard Hot 100 year-end charts, determining the percentage of unique words (total number of different words used) and repetition of titles per song. 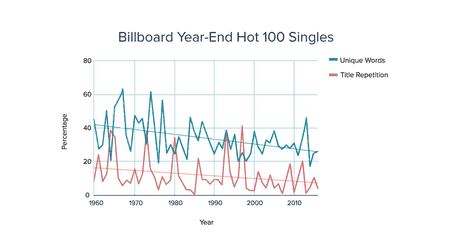 While there is a slight downward trend for both unique words and repetition of titles through time, the jumps are often erratic between years. To obtain a clearer look at pop music’s lyrical structure, we pooled the lyrics of the top five tracks from the Billboard Hot 100 chart from each year, and assessed their unique word count by decade. 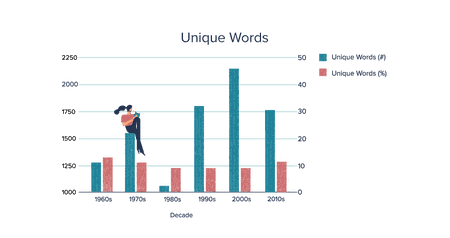 While the quantity of unique words varies greatly between decades, the percentage of unique words for each decade remains almost the same, ranging from a low of 8.9% in the 1980s to a high of 13.2% in the 1960s.

A 2016 study published in the journal Frontiers in Psychology concluded that the average 20-year-old English-speaking American had a “productive” vocabulary (words an individual can properly use) of less than 21,000 uninflected words (e.g. “sun” is uninflected, “sunny” is inflected).

At an average base of 20,000 words, Reading Teachers Book of Lists asserts that the first 1,000 words are used in 89% of common texts, with 3,000 words comprising around 95%. Considering that each decade’s number of unique words falls within those parameters, we can see that pop music continuously produces lyrics that are understandable, and therefore hopefully catchy, without oversimplifying the language.

Digging deeper, we examined several categories of the types of language used in each pool of lyrics per decade, including profanity and sexualization, expressions of love, and pet names.

In the name of science, we looked at the use of the words fuck, bitch, ass, damn, shit, hell, sex, butt, booty, pussy, hips, and hot in song lyrics since 1960. 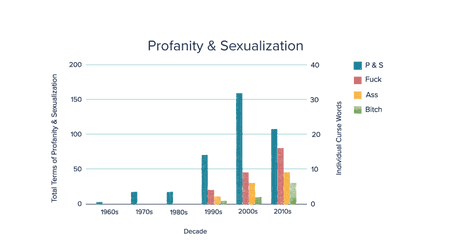 We can also see the steady increase in the use of curse words like bitch, ass, and fuck, thanks mostly to hip hop’s continuing success, suggesting that such terms are becoming more commonplace and possibly even acceptable for listeners. The Canadian Broadcasting Standards Council recently announced that the use of the word “fuck” on French-language broadcasts was no longer taboo. Perhaps the U.S. is next.

Looking at the evolution of terms of sexualization, we first see the use of “sexy” appear in the 1970s on songs like Johnnie Taylor’s “Disco Lady” and Rod Stewart’s “Do Ya Think I’m Sexy?”

In the ’90s you have songs like “Too Close” by Next, which is essentially about a guy getting an erection while dancing with a woman (“I feel a little poke comin’ through on you,” or, simply, “You’re makin’ it hard for me.”) Similarly explicit is Color Me Badd’s “I Wanna Sex You Up.” But on TLC’s “Baby Baby Baby,” the Atlanta trio kindly inform men that sex is never guaranteed (“Cause a girl like me, won’t settle for less / I require plenty conversation with my sex”), a message that rings loudly today.

In the 2010s things get a bit more bizarre, with Kanye West rapping lines like “Tell me what’s next? Alien sex / I’mma disrobe you / Then I’mma probe you,” on Katy Perry’s “E.T.”

With the rise and reign of social media platforms and memes, the bar for self-expression and shock value consistently rises. However, the internet also keeps artists in check. Robin Thicke’s 2013 hit “Blurred Lines” has been labeled the most controversial song of the decade, earning descriptors like “rapey” for its lyrics like “I know you want it / But you’re a good girl / The way you grab me / Must wanna get nasty.”

Have we lost sight of love?

In examining expressions of love we looked at the use of the words love, heart, kiss, and feel. 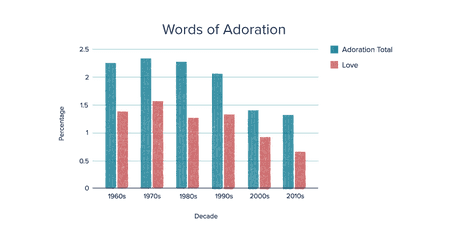 In contrast with the increase in sexually charged words, we see a clear decline in expressions of love through time, although variations of the word “love” were used the most in the ’90s and third most in the aughts.

While it is difficult to determine whether the directions of these two categories are correlated or not, some would argue millennials are inclined to pursue Tinder dreams over establishing meaningful relationships. However, the reality is that societal pressures surrounding marriage have been cast aside. From 2005 to 2015, the median age of marriage in America shifted from 25.5 to 28 in brides and 27 to 30 in grooms, and the U.S. marriage rate has been falling for over two decades. And, as a 2015 study published by the Archives of Sexual Behavior pointed out, millennials are having less extramarital sex than baby boomers, so pop music’s increasing sexual expression clearly does not equate to an increase in sexual partners.

While the lyrics of love may be changing, they aren’t dead: songs are still littered with references to objects of affection. We examined the use of the words baby, sugar, angel, and honey since the ’60s. 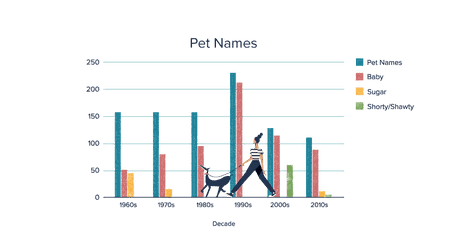 The use of pet names remains relatively similar through time, the exception being a considerable surge in the ’90s. This can be explained by the popularity of R&B, which heavily employed the term “baby” during the decade, thanks in no small part to contributions from Britney Spears (“…Baby One More Time”) and Sir Mix-a-Lot (“Baby Got Back”).

The chart also reveals how the use of “sugar” faded from popular music after the ’60s and ’70s, reappearing only in the 2010s courtesy of Maroon 5’s aptly titled track “Sugar.”

Even more short lived is the appearance of “shorty/shawty,” existing almost entirely within the 2000s, notching drops across eight songs from artists including Lil Wayne, Flo Rida, Usher, T-Pain, and 50 Cent. While the term was first used by a rapper in 1985 (Too $hort’s “Everytime”), it was the rise of Southern hip hop in the late ’90s that primed the slang for mainstream use in the following decade. While Southern hip hop remains in the eye of popular music, the crunk wave of the 2000s gave way to trap in the 2010s, and “shorty/shawty” went with it.

What does it all mean?

It’s hard to say what brings certain phrases to prominence within popular music — whether mainstream lyricism is derived from popular culture at a given time or if it serves as a precursor for cultural slang-trends — but these colloquialisms simply serve as bait du jour, interchangeable within the larger context of pop lyricism. While popular music undeniably reflects shifting cultural trends, both large — like the growth of sexual expression — and small — like the fleeting deluge of “shorty” — mainstream hits have adhered to a consistent lyrical framework, helping ensure their relevance well beyond their release through relatable language. Ultimately, it appears popular music is more determined by its lyrics than it is by its sound.

Meet the Faroese Rapper Spitting into a Sea of Clichés

The 12 Funniest Words in the English Language, Based on Science