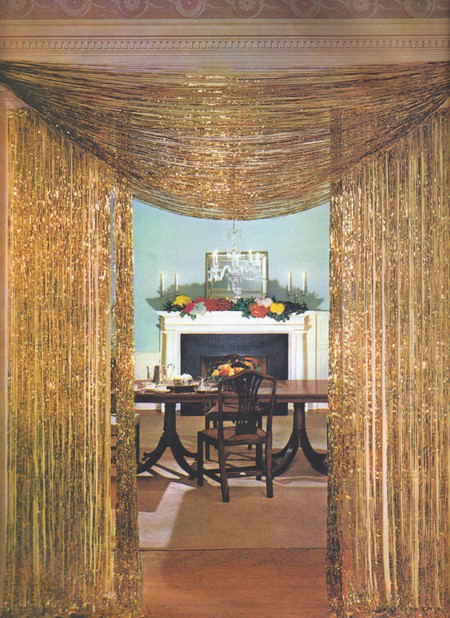 The trend for replicating the nostalgic 1950s Christmas is hot right now, as kitsch decorations and vintage toys are more popular as ever. With a chaotic political landscape and uncertain future, it’s no wonder we’re harking back to the ‘golden era’ to salvage some of that Christmas cheer. We look at some of the celebrated designs and iconic favorites of the time, showcased in new book Midcentury Christmas.

Toys in the post-war period were more colorful, dynamic and gender specific than ever before. Serving as miniature versions of the adult world, tiny domestic appliances, dolls houses, tea sets were marketed at girls, while chemistry sets, little cars and telescopes were aimed at boys. 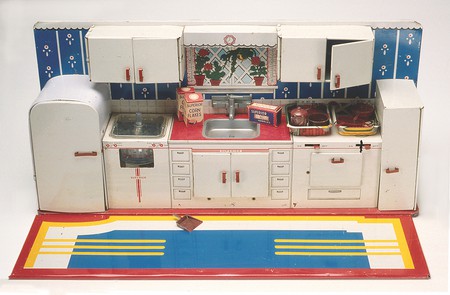 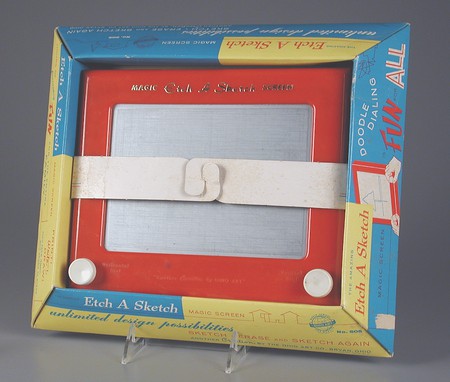 The Midcentury era was as much a time for adults to ‘play house’ as it was for their kids, with advertisers presenting everything from typewriters to washer-dryers as a fun new toy. Even Santa Claus was brought in to sell the goods, and the lure of color advertising was used to give practical, evergreen products an edge. 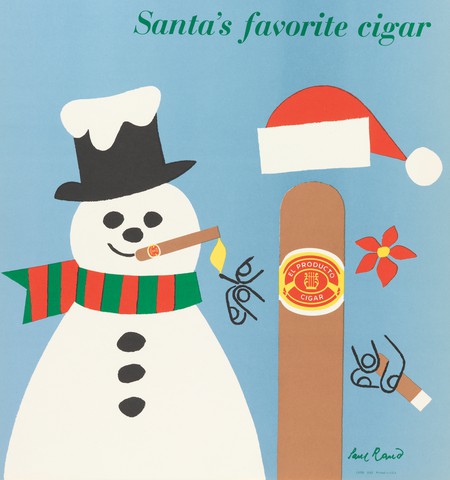 Cosco Metal Furniture, for example, presented an array of affordable card tables, playpens, serving trolleys, room dividers and chairs, displayed by a model sporting a Mrs. Claus-style red dress with white fur trim. The drinks trolley in particular has had a huge revival, with many high-street retailers now selling them as people desire the Mad Men-style cocktail hour at home. The hit TV show actually has a lot to answer for – it has reignited people’s passion for Midcentury-style interiors and for recreating the alluring Don Draper lifestyle. 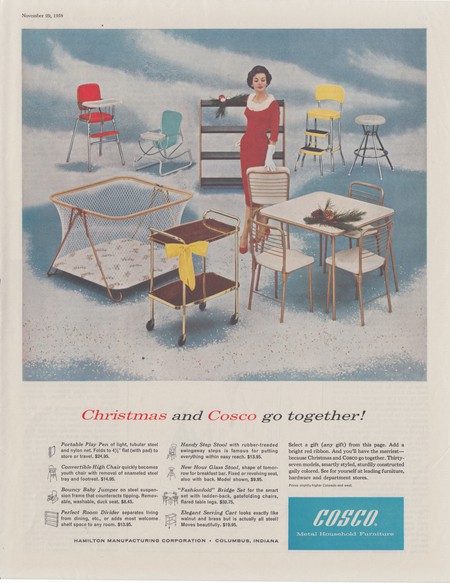 Aluminum Christmas trees were only popular for a short period, but they’ve come to epitomize post-war Christmas – they were lightweight, cheery and futuristic. Aluminum’s utility and affordability made it the new wonder material of the 1950s suburbs, but it was precisely this association with domestic bliss and consumerism that made it uncool in the psychedelic 1960s, and so they swiftly lost their shine. 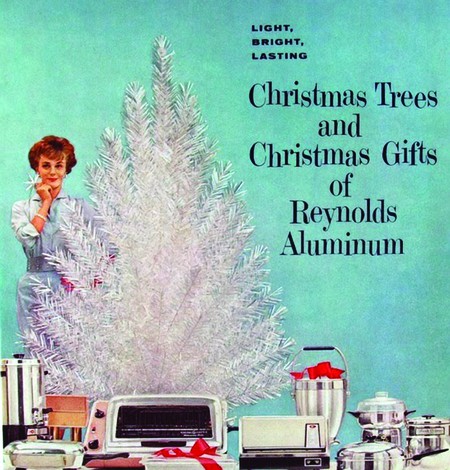 Glass Christmas baubles were first made in 1847 in the town of Lauscha, Germany, around the time that Christmas trees were enjoying a revival in the country. The ornaments steadily grew in popularity, with American retail tycoon F. W. Woolworth introducing them to the US – by the mid-1890s, Woolworth’s stores were selling about $25 million in baubles each year. It was native German Max Eckardt, however, that really stepped up the pace with the mass production of his silvered ‘Shiny Brite’ baubles. They reached peak popularity in the late 1950s, but faded soon after plastic ornaments were introduced. Luckily, as they were produced in such high volumes, they’re still readily available on the vintage market as the demand for retro decorations is on the rise. 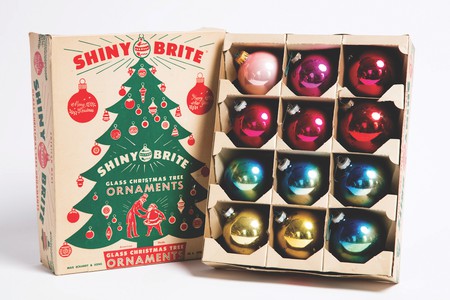 Assorted Shiny Brite ornaments from the 1950s and 1960s, shown in a box from the same period | © Jeffrey Stockbridge

Love it or hate it, Tinsel has long been a firm favorite. It actually dates back to 1610 in Nuremberg, and was originally made from silver. However, it was at the turn of the century it was manufactured using aluminum after World War I, primarily in France. After the Second World War, lead was used, often advertised as ‘fire safe’ and tarnish-proof. However, with concerns surrounding the health effects of lead, the metal tinsel was banned in 1972, leaving us with the plastic version we use today.

Trends always come back around, and the vogue for Scandinavian designs, Japanese pottery and South American textiles were just as popular in the Midcentury as they are now. These were all featured in Craft Horizons, the cutting-edge design publication of the time. Folk art was a huge influence on Midcentury designers, most notably the famous duo Charles and Ray Eames, who collected figurines, toys and textiles on their travels. Craft Horizons, which was first published in 1941 through to the early 1960s, was a treasure trove of photography, illustration and critical writing on craft and at Christmas, it would feature gift and decorating ideas that would appeal to the bohemian end of the American design spectrum. 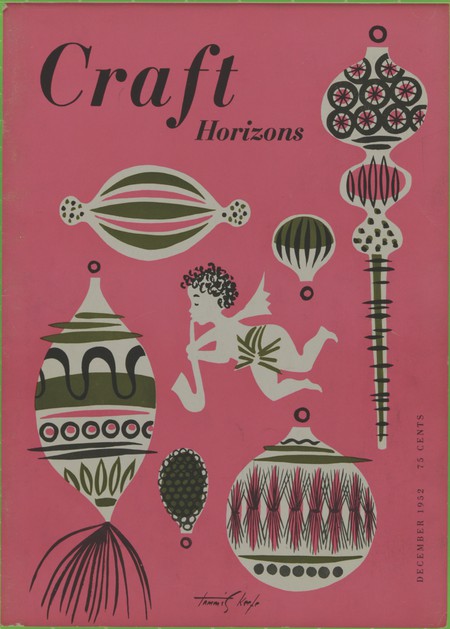 Midcentury Christmas highlights just how similar the festive trends are now more than half a century on. It’s an uplifting, vibrant book packed with 200 colorful illustrations that won’t fail to bring a smile – ultimately, it’s the ideal gift for any design lover this Christmas. Buy your copy here. 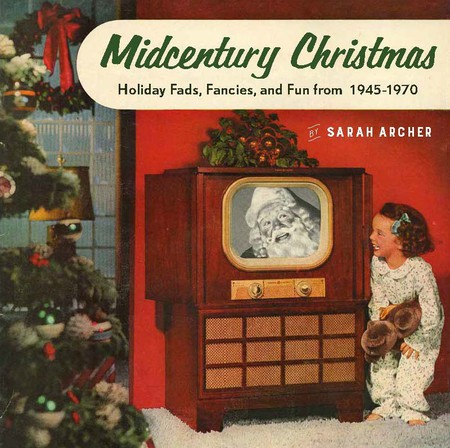