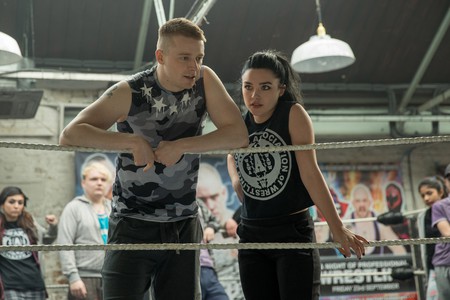 Rising stars Florence Pugh and Jack Lowden document their journey from puny actors to hulking wrestlers for the new, uplifting British comedy Fighting With My Family – one that took them from jogging along disused railways in London to pumping iron in Florida’s sunshine.

Florence Pugh is teasing Jack Lowden about the number of M&S meals he had to scoff down to bulk up for their new movie Fighting With My Family. “You know the three-packets-for-a-tenner deal? He’d just have a variation on coconut chicken or coconut chilli chicken or barbeque chicken,” she says, laughing. “He’d just get each packet out and start eating. That and Bounce bars.”

But it wasn’t just Lowden who had to pile on the pounds. Pugh did too for her role as now retired real-life WWE wrestler Saraya-Jade Bevis. Better known by her stage name, Paige, the athlete is still only 26 but has already had her life turned into a movie by Dwayne Johnson AKA The Rock with Stephen Merchant in the director’s chair. It’s a rousing British comedy that gets you in an emotional chokehold – think a feminist Billy Elliot but with wrestling instead of ballet dancing. 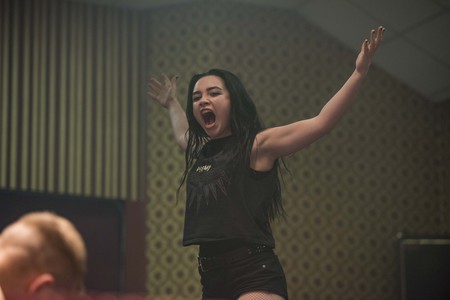 The pair, each assigned their own CrossFit trainer, started off their intensive training in London and Oxfordshire. They were then put through their paces at the NXT in Orlando, Florida – where WWE’s next-generation stars are groomed – before shooting key scenes at The O2 Arena in London and Staples Center in Los Angeles.

Lowden, 28, plays Saraya’s brother Zak Zodiac, who had his childhood dreams of becoming a WWE champ cruelly dashed when he was rejected during try-outs while she was accepted in 2011. Paige, who was 18 at the time, came from the quaint city of Norwich and was plucked from obscurity having grown up in a family of wrestlers to become an unlikely star – the youngest ever to win a Divas Championship.

Paige led the way for female wrestlers who up until then were mainly models and cheerleaders. She was nothing like the women WWE usually hired; instead she was deathly pale with dyed black hair and piercings. Her dad, Ricky Knight, played in the movie by Nick Frost, claims she “changed the face of wrestling”. Her mum, Saraya Knight, played by Lena Headey, adds, “Now you’ve got all shapes and sizes – the door is open for people who can do the job.” 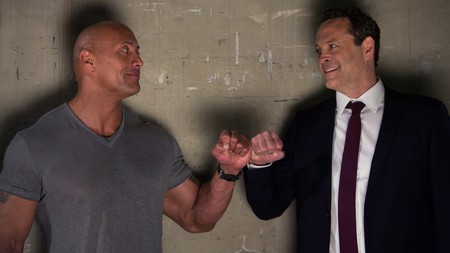 Pugh shows grit and guts as the goth misfit struggling to make friends during training in Orlando, Florida, the sunshine city of perfect abs. The actress, who was nominated for a Bafta for her role as Lady Macbeth, portrays the steely determination and vulnerability that drove Paige to become a winner even as she suffered badly from self-doubt and homesickness. Lowden is equally fascinating as the man left behind struggling with resentment and jealousy.

Lowden and Pugh’s transformation from actors to wrestlers had to take place at lightning-quick speed – they only had a month before shooting – but it was a challenge they accepted with aplomb. Culture Trip spoke to the pair about their gruelling journey to get in shape for the movie. 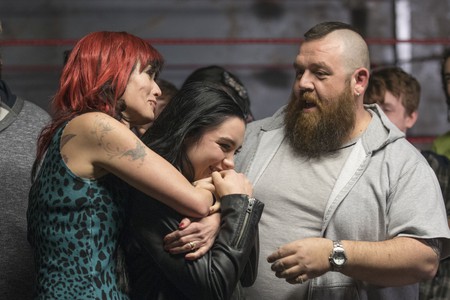 Culture Trip: Where did you train for your roles?

Florence Pugh: As soon as we got the roles, Stephen mentioned he wanted us to do as much wrestling as we could. We would have stunt doubles, but he wanted to get us in the ring so we needed to get really strong. We were assigned CrossFit trainers, and it was a month of intense squatting and eating as many protein bars as possible. And wrestling 24/7. My trainer had a gym in Oxfordshire, which is where I was based at the time. I still train with my guy because I actually got ready with him for The Little Drummer Girl. It’s brought a lot of skills to the surface.

Jack Lowden: I was told the [number] of calories and [to have] four, five meals a day. Sitting in cars going back and forth between wrestling training just shovelling food in my mouth. I was training at CrossFit North London with Ged Andrews, who was remarkable. The main prep for me was eating which was fun but hard. The physical training wasn’t as tough as forcing yourself to eat when you’re not hungry.

CT: Where did you go for healthy meals?

FP: I love Dishoom [in Shoreditch]. Any time I’ve needed to celebrate or go in there for a hangover it’s done me very well.

JL: I did a play recently and all I ate was Itsu. When I was doing this I was eating a lot of sushi because I was a complete eejit. I didn’t really know what was going on. I thought I had to eat as much chicken and carbs as possible.

CT: Where’s your favourite spot for an outdoor workout?

FP: I used to run round London Fields although I don’t tend to bring my trainers to the park any more.

JL: I used to live in North London, and when I went for a run it was along a disused railway which runs through from Highgate to Crouch End. It was a bit overgrown. You just spent your time dodging people on bikes and families.

CT: How was it training at the NXT in Orlando, Florida?

JL: That’s where it got more specifically about wrestling rather than getting hench. We learnt how to slide onto a wrestling ring, how to go through the ropes, how to dive off certain things. We did all of that with professional wrestlers who were also training at the time. Me and Flo were just running about in the middle.

FP: Hoping that we didn’t get hurt. Up until then we hadn’t seen it in action in front of us. When we went there we were surrounded by these massive athletes whose lives are completely dedicated to wrestling. To be there among that and start learning while feeling like pillocks was an eye-opening experience.

CT: What was it like filming at the O2 Arena, where the real Paige and Zak auditioned for WWE?

FP: Those arenas are huge, and they do exactly what I think the film captures which is they are mega. You have to fill that space and you have to perform to that [number] of people. It was fun. We had Vince [Vaughn] there. We shot that scene with almost 30 planes going overhead and we had to time it so the plane wasn’t going over our head.

CT: What was it like shooting at the Staples Center in Los Angeles for your big fight scene?

FP: It was crazy! We shot that on the third day of the shoot and all of the energy and all of the prep had gone into that. Suddenly we had to do those scenes in front of all of those people. It was magnificent, terrifying, and I take my hat off to anyone who steps into the ring. It was so thrilling though. The scene where we bump into Dwayne, we shot that in the Staples Center and pretended that was the O2.

JL: We had to go to where The Rock was. He wouldn’t come to the O2.

Fighting With My Family is out in UK cinemas on 27 February.