Female Skateboarders Balancing Out The Once Male-Dominated Sport 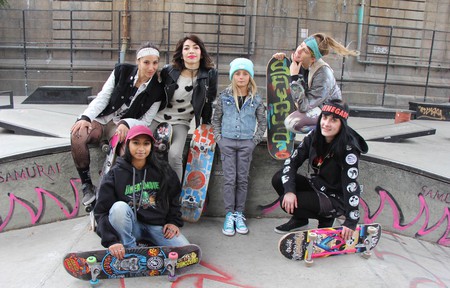 Tracey Barton-Herishen is standing underneath the Manhattan Bridge keeping a vigilant eye on her daughter. The sun is jostling for position among the ominous incoming clouds. It begins to drizzle.

Wearing a powder blue Diamond Supply Co. beanie and matching Converse hightop sneakers, Zoe Herishen, 9, is speeding around the Lower East Side Coleman Skatepark on her board. She rolls toward her mother, who hands her a pair of gloves. It’s getting colder by the minute. Zoe drops back into the concrete bowl.

“I wanted a ballerina, but I got a skateboarder,” Barton-Herishen says with a smile. 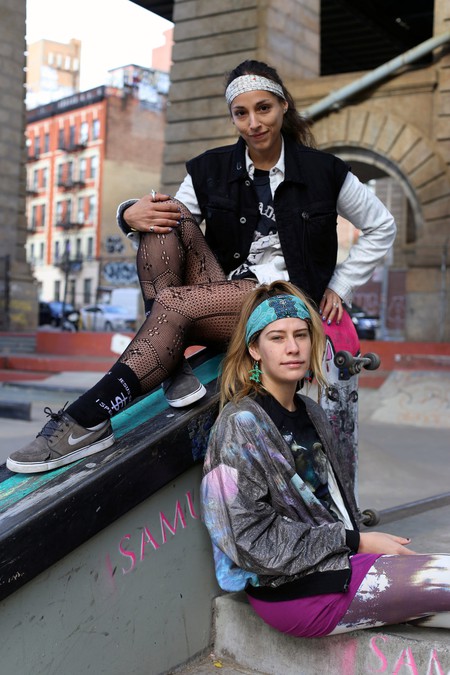 The once male-dominated culture, sport and lifestyle is getting a makeover thanks to an influx of female skaters.

READ: Style From The ‘Ladies of Shred’

“When people see a girl roll up at a skate park everyone is excited because it isn’t something you always see,” said Reid, who lives in Brooklyn, N.Y. “Girls’ skateboarding is like where guy’s skateboarding was at in the early ’90s; it’s just starting to blossom.”

Paez took to skating because her boyfriend in college skated. She said the perception of female skaters has improved since she started to kick, push and coast.

“When I started about 10 years ago there were a lot less female skateboarders and the ones who were around were considered butch,” said Paez, who lives in Brooklyn, N.Y. “I feel like not only are they more accepting now, but they’re more encouraging. It’s 2016, people shouldn’t care.”

Long gone are the days of being referred to as “ramp tramps” or “butch.” Today, female skaters aren’t a rarity. Brightly colored headbands holding back long hair, lipstick and even glitter are visible among the ramps, rails and bowls of skateparks across the country.

Girls Riders Organization (GRO) is a non-profit organization aimed to educate and promote girls and women’s participation in action sports, including skateboarding and snowboarding.

When founder and CEO Courtney Payne Taylor started skateboarding, she realized there weren’t a lot, if any, other girls at the skateparks. She bought a van and drove around the country promoting skateboarding for girls. GRO was founded in 2006.

Barton-Herishen is the organization’s director of events and programs.

“It’s very intimidating for girls to come into a skatepark, for the first time especially, and it’s packed with guys who are good and it can be an intimidating place to learn,” she said. “By creating an organization where we can bring girls together, we make it a safe environment for them to learn and be more comfortable and progress a lot quicker.”

Modeled similarly to the Girl Scouts, GRO helps facilitate the relationship between an older/more experienced skateboarder and someone getting into the sport. GRO has eight “crews” — groups of five or more GRO skaters in a single community or city — across the United States and Canada in cities including New York, Los Angeles, Nashville and Ontario.

“At my first event I was one of the beginners, but now I can help little girls how to skate,” said Herishen, who started skating approximately two years ago when she saw her older brothers do it. “I want to get more girls into skating. When little girls see me or other girls at a skatepark, I hope they say, ‘I can do that, too.’” 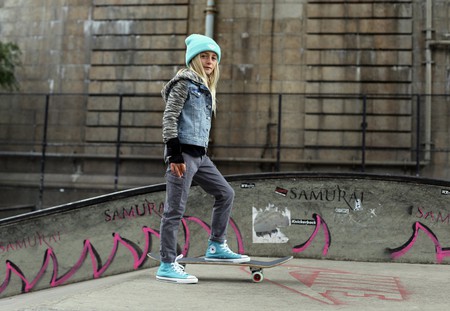 Zoe Herishen, 9, has been skateboarding for about two years | © Kelsea Kosko

Unfortunately, there is still an air of entitlement and unnecessary sexism among the skate community. To some, female skaters are looked at as weaker, not-as-serious skaters. Paez said male skaters would offer her a hand after she fell or ask if she was OK.

“It was actually frustrating because they were using it as an excuse to talk to me because they weren’t going up to other guys when they slammed,” she said. “It helped create this stronger, tough girl facade in me. I would come skate, say, ‘Hey, I’m fine. Thanks,’ but at the same time I didn’t want to get derailed from the reason I was there — to skate.”

Seeing an increase in female skaters in recent years has gotten Reid excited.

“It’s great,” she said. “We’re trying to keep the younger girls stoked and inspired … and not get them in too much trouble.”