Fashion Influencers With a Feminist Feed 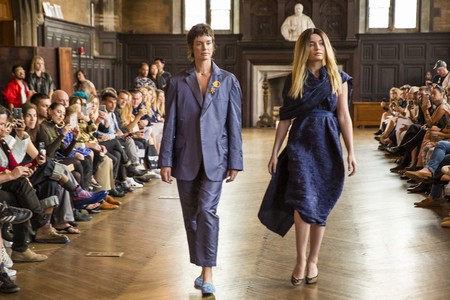 These sartorial innovators will keep your Instagram feed filled with intersectional feminist messages, empowering women in the fashion industry and world at large.

The state of fashion in 2018 has evolved beyond cookie-cutter models and fashion houses helmed by powerful white men. Today, the once exclusive world of fashion has become more inclusive, representing a multiplicity of cultural, social, gender, physical, political and economic identities. Much of this shift is due to fashion influencers, who have shattered the old editorial guard that once dictated trends. Anyone with a smartphone and social media chops can become an influencer – and design houses, casting agents, fast-fashion retailers and cosmetic companies are taking note.

In March 2018 Louis Vuitton, one of the oldest and most prestigious French luxury fashion houses, named streetwear designer Virgil Abloh of Off-White fame as its artistic director of menswear. Corporate fast-fashion retailer H&M made a splash with its female empowerment-fueled ‘She’s a Lady’ campaign in 2016, starring transgender model Hari Nef (who was also tapped by Gucci for a 2017 campaign), Instagram star/streetwear darling-turned-plus-size model Paloma Elsesser, septuagenarian Lauren Hutton and unconventional beauty Adwoa Aboah. During the 2018 Golden Globe Awards, stars wore black to support the Time’s Up Movement to end sexual harassment in Hollywood. All of this adds up to one thing: from luxury design houses to corporate retailers to celebrity movements, the message is clear. To be relevant, the old guard must be dismantled. In its place, a new guard emerges, one that is democratically empowered and dictated by the collective.

With this in mind, here are 10 influencers representing the new guard. And they definitely aren’t afraid to use fashion as a vehicle of self-expression, political activism and no-holds-barred feminism.

Cheeky Maa, AKA Cheeky, AKA Sydney Victoria, is a fashion model, designer and artist living in New York City. Her shaved eyebrows have become her trademark as a model, and her edgy look invokes punk-rock and club-kid style. Her message resounds with authenticity as she encourages others to own their style.

A major fashion model in the late ’80s, Sibyl Buck worked with Yves Saint Laurent, Jean-Paul Gaultier and Alexander McQueen. She retired from fashion to play in a rock band, and currently is a yoga and wellness instructor in Topanga, California. In 2017, she walked in the Músed by Lindsay Jones show with her daughter, model Puma Rose Buck.

Paloma Elsesser, AKA Palomija, is a fashion model living in New York City. She’s landed many campaigns after being discovered by make-up artist Pat McGrath on Instagram. She’s currently a plus-size model for IMG. Her body-positive message is to represent yourself, just like she does in her feed with her no make-up selfies.

Christine Kohler is a creative director in New York City with an agency background. Currently, she works with indie fashion labels and magazines, and is part of a collective of empowered women in fashion.

Founded by model Adwoa Aboah, who catapulted to fame after featuring on the cover of the British edition of Vogue magazine in 2017, Gurls Talk encourages self-esteem in young women all over the world. The online community of Gurls Talk has grown offline with community events and symposiums to challenge gendered social norms.

Tina Tyrell is a Los Angeles-born, New York-based fashion photographer and videographer. Her aesthetic leans towards the nostalgic, while her message speaks to the future of feminism.

Dalal AlDoub is a Kuwaiti beauty blogger and YouTube star who gained recognition for wearing a hijab in cosmetics and fashion campaigns.

CupcaKKe, AKA Marilyn MonHOE, is a model and rapper. She spreads a message of empowered female sexuality and ownership over the body.

Cheer Goth, AKA Sarah Glenn, is a New York-based creative director, fashion photographer and stylist who collaborates with indie fashion labels and indie feminist magazines like Ladygunn and Galore.

We Are Mortals by Anji Barker