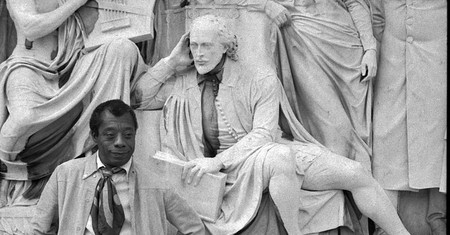 Ninety-two years ago today, James Baldwin was born in Harlem, New York at the height of that neighborhood’s historic renaissance. His upbringing in a troubled home, his precocious intelligence and sense of identity as a gay black man, and the social injustices that he observed and experienced first-hand, saw him become a leading voice of letters in the mid-20th century.

Baldwin’s debut novel Go Tell It On the Mountain (1953), a semi-autobiographical account of Baldwin’s hard knock Harlem youth, is often cited as one of the greatest novels of the 20th century. Baldwin’s collection of essays Notes of a Native Son (1956), is a milestone of literary reportage, one that collects some of the most poignant essays on race identity and literary criticism ever written. Giovanni’s Room, published a year later, takes as its subject Baldwin’s homosexuality, to which the writer would give what was then widely considered a shocking treatment, namely, an air of humanity.

Baldwin would later break the floodgates with his charged essay The Fire Next Time, a manifesto published a year prior to the Civil Rights movement, which he would participate within and help see to success. That spirit has been revived in a new book, The Fire This Time, an anthology edited by novelist Jesmyn Ward, that gather the works and words of a new generation responding to race.

All of this served to make Baldwin an American icon. He enjoyed a long friendships with some of the greatest artists and thinkers of his time, and was himself one of the sharpest minds of the 20th century. In observation of his birthday, we’ve posted two videos — a short documentary on his life and a recording of him reading — to honor his memory: