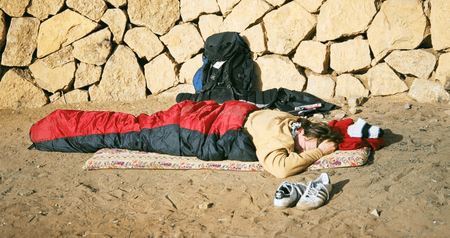 The author of Yawn: Adventures in Boredom highlighted some interesting connections between boredom and tourism.

The world runs on boredom, or tries to run away from it. We all know when we are bored, but how good are we at trying to cure it? In Yawn: Adventures in Boredom, Mary Mann examines one of our most numbing emotions and its impact on our history, culture, and recreational activity. One of the great medicines for boredom, she points out, is tourism, among the world’s first industries to take advantage of people’s ennui and their willingness to spend money to get rid of it. We spoke to Mann about the advent of the travel industry, tourism as colonialism, and whether niche cultures are elaborate cures for boredom.

You write about the father of tourism industry Thomas Cook’s first tour, in which 400 people showed up to a station in Loughborough to go on an excursion to another town 11 miles away. 400 is a lot of people. How did Cook manage to pull this off? Were they all bored and / or did Cook have a way of getting people to notice their own boredom?
Cook first proposed the idea in a temperance supporters meeting, and promoted the trip as a non-drinking temperance event. He was a huge temperance advocate, and believed that travel could help people give up alcohol by lifting them out of “the dull round of everyday life,” giving them new sights to see and things to think about.

So he introduces his first tour. And keep in mind, this is in the early 1800s: nobody has cars, only rich people have carriages, and passenger railways are brand new and expensive, so most people just don’t travel. England is a small country, but still, the vast majority of Englishmen and women at this time had never even been to London.

And into this world comes Thomas Cook, who’s negotiated this group rate on a train, tickets just a shilling apiece round trip, and I guess word traveled fast. People just lost their minds over it. You have the hundreds of people who showed up for the excursion, plus all these people who stood on the bridges over the tracks, waving and yelling. It can be hard to wrap our heads around now that tourism is so common, but just the idea of being able to visit a new place, any new place, was thrilling for them.

In one essay, you describe being a former kayak tour guide in Alaska, a job you describe as being without “sparkle or spray” and “the most routine thing you’ve ever done.” What were some of the behavior patterns of tourists you noticed while you were guiding them? Were people ever unpredictable?
As a kayak guide, I led an average of four 2-hour tours a day, so the work itself was very repetitive. You gear up the tourists, you give them the spiel about how to paddle and how to be safe and where you’re going to take them, then you take them on a circumscribed route and point out the sites on the route and share some facts and make some jokes, then you’re helping them out of their kayaks and gear and sending them on their way. Reset, do it again. And again. And again. To the point where it does get hard to differentiate the tourists sometimes. They could do something unpredictable and honestly, you might not even notice. It’s not their fault. It’s just the nature of the work.

Which is not to say it’s bad work, or that all your tour guides are bored stiff (though if they seem a bit dazed, try to be understanding). I have friends who love it. They just love being out in the wilderness and they’re super gregarious, so it works for them. Boredom is really variable that way. There doesn’t seem to be any such thing as a job or activity that’s universally interesting or exciting – I’ve talked with frequently bored artists and actresses, and really engaged accountants. I interviewed a psychologist, Wijnand van Tilburg, who believes that “boredom is an emotional signal that makes people very aware that in their current situation there is a lack of purpose,” and I’d wager a guess that boredom is highly variable because purpose is too. My purpose, apparently, doesn’t include a paddle.

The Australian hippie vagabond you meet romanticizes the tick of boredom as a prowess of psychism. Are subcultural movements like New Ageism or lifestyles like 24-hour activists engaging in (on some levels at least) really elaborate cures for boredom?
Ha! Well, I don’t know enough about New Ageism to say for sure, but I do know that boredom is sneakily part of the origin story of many things. Like, well, modern tourism, coming along because Thomas Cook thought that if people weren’t just sitting at home being bored, they wouldn’t drink.

Boredom is an uncomfortable feeling, a kind of irritable restlessness, which makes it an incredibly motivating force. We’ll go to great lengths to avoid being bored. There are stories about people vandalizing and shoplifting out of boredom, and on the flip side of that there are people who invent things and start companies because they’re bored. The guy who invented computer solitaire, for example, recently came out and said he invented it while he was bored at work. An anthropologist named Ralph Linton once theorized that “human capacity for boredom, rather than man’s social or natural needs, lies at the root of man’s cultural advance.” I think he wrote that in a paragraph about all the different styles of eating utensils we have to choose from. 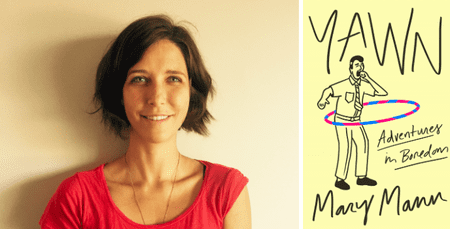 Interestingly, you write your primary travel essay at the Columbia library. How often for you did research, reading, and writing keep you occupied, and how often did you get bored with your work? When did you know that it was time, say, to quit for the day?
One of the really great things about nonfiction is that there are so many different components to the work. If I get restless while writing, and I can get up and search out a book I need for research, or send an email to someone to schedule an interview, that kind of thing. I’m naturally a restless person, my attention span is garbage, and so this work suits me really well.

Libraries are great places for me to work for the same reason – they’re full of things to look at and engage with, and almost anything I pick up can be used productively, so I’m not really wasting time (though sometimes I am). I think of good work distractions as things I can pick up and put down easily, and then get back to work with maybe a new idea or way of thinking. Doodling is a really good distraction because apparently, according to some studies, it actually helps you pay attention and remember things. Bad work distractions, for me, are mostly screen-based. Like TV – I can really zone out to TV, and then suddenly I’ve lost a whole hour and forgotten what was on my mind in the first place.

You mention tourism as a modern day form of colonialism, where one locale puts itself at the beck and call of foreigners in exchange for much needed currency. In what ways do you think we could evolve beyond this and make tourism and travel more egalitarian?
The first few decades of tourism seem to have been the major colonizing years, in the sense that the needs of travelers did really change the places they frequented. We’re such creatures of habit that even when we say we want to go somewhere really new and different, we still look for, say, caffeine every morning. And now you can get a morning coffee or tea almost anywhere, all over the world. I’m not sure what we can do about this effect, especially now that it has been compounded, in the many decades since Cook’s first tours, by the effect of globalized media – now anyone with even limited access to a computer or TV can see how other people live.

As a result, I think we’re less apt to be surprised by places we visit, and possibly less patient with the people in those places. One good thing to remember, for me anyway, is that the people who live in the places I visit are often dealing with the same restlessness that I deal with. Jamaica Kincaid wrote that locals look at tourists and “envy your ability to leave your own banality and boredom, they envy your ability to turn their own banality and boredom into a source of pleasure for yourself.” A person living in a tourist destination might also want to see something new and different, and respecting the humanity of that feels important to me.

How has travel changed for you in the past couple years as you worked on these essays? What was the last thing that kept you excited for a long period of time?
The more I researched boredom, the more comfortable I’ve gotten with both my own boredom and other people’s. Most adults don’t talk about boredom often, if ever. There’s this idea that it’s sort of shameful, you know, “only boring people get bored.” But understanding that it actually happens to everyone, that it’s normal, really helps me be patient with other people’s restlessness. It also helps me pay more attention to my own boredom, which I think (I hope!) makes me nicer to be around. For example, I don’t really seek out beach holidays anymore, because they always used to make me crabby, and now I understand that’s just because I’d get bored, then feel guilty for being bored, then start feeling guilty for all sorts of things, real and imagined… it’s a vicious cycle.

The last thing that kept me excited for a long period of time was actually researching boredom, if you can believe it. I was always coming across it in unexpected places, like in the origins of tourism, or having surprising conversations with people about it, like with my very staid and buttoned-up friend in the Foreign Service, who avoided boredom by making a game with her colleagues of processing visas to the rhythm of select songs. Because boredom is something we’re trained not to talk about, there are all these stories about it that we don’t usually get to hear.