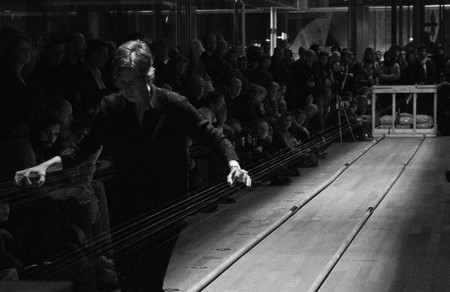 Part music and part performance, Ellen Fullman’s 100-feet Long String Instrument is both a sight and a sound to behold.

It takes five days to install The Long String Instrument. The strings of the LSI are exactly 100-feet-long – 56 of them, 2cm apart from each other – and like any other string instruments, they are stretched taut between wooden resonators. To put that 100 feet into prospective, that’s the width of two basketball courts.

The bow of this ethereal-sounding instrument is artist and composer, Ellen Fullman; she rubs her hands with rosin and plays it by gently pressing down on the strings as she paces up and down the length of the instrument. In her own words, ‘My whole body is a finger moving along a fretboard.’

While Fullman has been playing her self-created LSI for nearly 30 years now, it’s only recently that she and her unusual instrument are getting noticed. According to KQED Arts, a rare 80s LP of Fullman playing, re-emerged and was re-released on vinyl late last year. Since then, she has received invitations to art museums and music festivals to exhibit her LSI, as well as obtaining a major US arts grant. 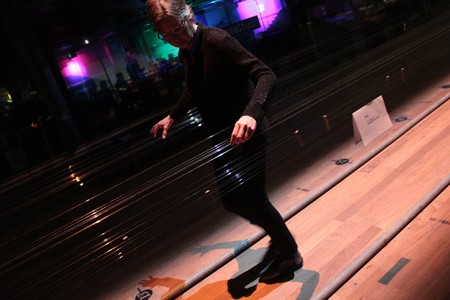 The sound of the LSI has been described ‘like a prairie wind,’ and been likened to ‘the experience of standing inside an enormous grand piano.’ Depending on how large or even the interior structure of the room, the music can sound very different; ‘The longitudinal mode is solely based on tuning by length; therefore a longer room offers different possibilities for low frequencies.’

Despite its impressive size, Fullman’s LSI isn’t the largest of its kind – that record belongs to William Close’s ‘Earth harp,’ where the instrument’s longest string is nearly 1000 feet long.