Pat Schmidt may look like he's from California, but he's proudly from New Jersey. | © Luke Forgay/Volcom

Pat Schmidt looks like your prototypical Southern California surfer — he’s tall, lean and has shoulder-length blonde hair that is usually seen protruding from beneath a flat brim hat. But the Volcom pro rider isn’t from the Golden State.

He proudly hails from the Garden State: New Jersey.

“Most people look at me and think, ‘Oh, this kid’s definitely from California,’ but that’s not the case at all,” Schmidt said while on a recent surf trip in Bali, Indonesia. “I love where I’m from and I could never leave. I travel, but it’s always nice to go back there.”

Schmidt, 22, is from Manasquan, N.J., located along the state’s eastern shoreline bordering the Atlantic Ocean. He relishes the opportunity to be a local legend — a bigger fish in a smaller pond as he puts it — showcasing his talents frequently in the waters of the Manasquan Inlet.

“I stick to my one-square-mile town surfing the jetties and sand bars,” he said. “It’s definitely not California or anything like that. The waves actually get really good, they’re just not that consistent, but when it gets good, it’s really good.”

Schmidt, who grew up surfing with his brothers and father, gets a laugh while on his travels around the world when he’s asked how he surfs in New Jersey. People have been known to question whether there’s even an ocean nearby — in fact, the state boasts 130 miles of coastline.

Surfing the East Coast differs from the West Coast in a variety of ways. Easterners brave the cold waters more frequently, surfing even when there is snow blanketing the sand. The quality of waves favors the west with more consistency, but when they hit the eastern seaboard, it’s worth the wait.

“I’d rather get really good waves once in a while with my buddies than surf the same waves every day with a million other guys out,” Schmidt said.

Because he surfs cold water more frequently, it’s no surprise some of Schmidt’s favorite spots around the world are a little colder than Bali, Hawaii and Australia. He favors surfing places like Canada and Scotland, preferring to don a wetsuit in the colder waters for quality waves and lesser crowds.

Don’t forget New Jersey. Schmidt loves it there. It’s also why he and his friends call themselves the Pork Roll Kids.

Balaram Stack spends the majority of the winter months at the Volcom House located in Oahu, Hawaii. For most of the days between October and March, the New York-based Stack is surfing the legendary break known as Banzai Pipeline.

Yet there are times — like around last Christmas — when he leaves the surfing paradise to return home to Point Lookout, N.Y., for three or four days to enjoy a can’t-miss local swell.

“It would be just like a strike mission back home,” Stack said. “It’s definitely hard for people to understand, but people I surf with get it. You probably won’t see a dude from California do a strike mission home from Hawaii because it’s not as much of a priority when a swell goes there since it happens more frequently.” 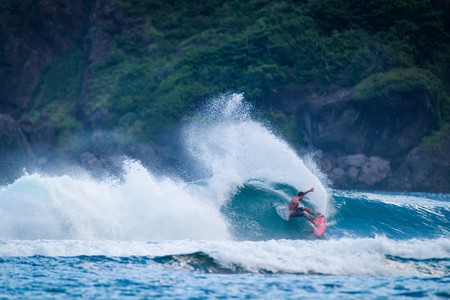 Like Schmidt, Stack got into surfing following in his brothers’ footsteps. Before he knew it, Stack was making waves in the local surf scene, first representing Unsound Surf, a local surf shop in Long Beach. He attended a Quiksilver camp in Montauk that resulted in his first sponsor when he was 13 or 14 years old. Local amateur competitions evolved into regional events in Florida or North Carolina before becoming national competitions on the West Coast.

“For me, it was never like ‘This is what I’m going to do,’ it was more like ‘I’m having fun surfing and it just rolled into something I’m doing today for a living,’” Stack, 25, said. “It’s weird for me to explain it. I’m so fortunate for it to have happened. Who can say doing what they loved turned into a career?”

Stack, who began surfing for Volcom in 2013, said East Coast riders are proud of where they grew up surfing. He especially feels that local loyalty when he’s out west with an endless supply of other surfers.

“It’s just a different vibe, a different feel,” he said. “West Coast surfers grew up differently — they had more waves, perfect weather all the time. We have crazy weather over here, seasons changing; there could be two feet of snow on the ground when the waves are firing. Growing up in it, that was normal.

“There are certain factors that make East Coast surfers appreciate where they’re from a lot more.”

Travel and accommodations in Bali provided by Volcom.