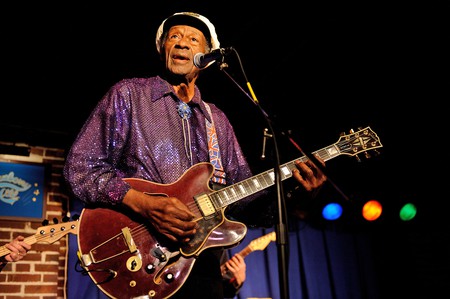 They were allowed to see the singer’s body at a public viewing at St Louis’ Pageant club before a private funeral on Sunday.

A musician played a selection of his greatest hits as fans filed past the open casket, which had a red Gibson guitar attached to the inside of its lid.

Berry died last month at the age of 90 at his home in Missouri. 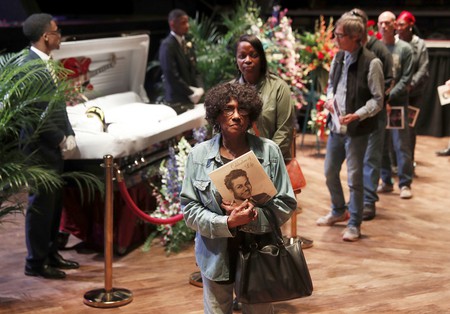 Fans were allowed to see his body | (c) AP/REX/Shutterstock

Kiss rocker Gene Simmons took to the podium on Sunday at his funeral service to pay tribute to the musician.

He spoke about how Berry had been hugely influential to him and how he worked to break down racial barriers through his music.

Former US president Bill Clinton sent a letter in which he called Berry ‘one of America’s greatest rock and roll pioneers’.

The letter read: ‘He captivated audiences around the world and his music spoke to the hopes and dreams we all had in common.’

Berry played at both of Clinton’s presidential inaugurations.

A new album that Berry had been working on before his death will be released posthumously later this year.

His family said: ‘Working to prepare the release of this record in recent months and in fact over the last several years brought Chuck a great sense of joy and satisfaction.

‘While our hearts are very heavy at this time, we know that Chuck had no greater wish than to see this album released to the world, and we know of no better way to celebrate and remember his 90 years of life than through his music.’