Christmas Gifting Traditions Around the World 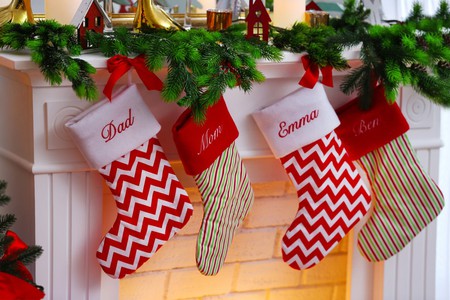 While lots of Westerners might find the newest tech gadget or perhaps even a live puppy underneath their tree, the Chinese need no more than a beautifully decorated apple. Still the fact remains that for billions of people around the globe, Christmas is inextricably linked to the act of gift-giving and receiving. Even if it requires tying up your mother until she caves and forks over the goods – we’re looking at you, Yugoslavia.

Candies pooped out by a Christmas log and carrot offerings

A lot of Western European kids are lucky enough to be treated to two waves of presents during the holiday period. Before Santa even makes an appearance, another generous white-bearded gentleman pays a visit. On the night of December 5, kids busy themselves by putting out their shoes and filling them with drawings, carrots, cookies or other things they can scrounge together in the pantry. Depending on the household, a glass of milk or a beer might accompany the offering. Next, the booty is put alongside the chimney for St. Nicholas, his (lately controversial) helper Black Pete and their white horse (hence the carrots) to find. All of this prep is meant to put good St. Nick in the most giving mood possible, and usually kids hurry downstairs on the morning of December 6 to be greeted by a flurry of presents, overflowing from their shoes.

In Austria and Germany’s Bavaria region, the wise man could also bring Krampus, a terrifying half-goat, half-demon that puts mischievous children in a wicker basket on his back. But even the most rebellious rascals will have already enjoyed a couple of days of light snacking on chocolates and other sweets by that time from their traditional German Advent calendars that count down the days until Christmas, one treat at a time.

On the opposite and more whimsical side of the gift-giving scale we find Catalonia’s Tío de Nadal, a sock-hatted hollow log with thin, sprightly legs and a face that sweetly smiles up at all kids. On Christmas Eve, Tío is put inside the fireplace and kids wack away at him with sticks until he ‘poops’ candies and presents everywhere. Hence its nickname Caga Tío, or ‘Shit Log’. When the log is all done, it produces a piece of garlic, onion, or a herring, and the family will share the presents and burn the poor little log for warmth. 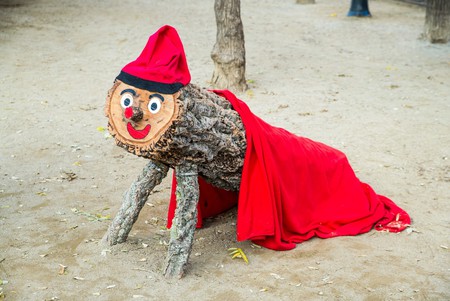 Neighbourly sharing and shoeboxes of grass

Mightily convinced that their country is home to none other than the rotund gift-giver himself (though the Finnish would beg to differ), Toronto has been organising a massive, magical Santa Parade since 1905 that is carved in the hearts of many Canadian kids the same way that returning home from Midnight Mass to find presents under the tree is. More adult merriness is had throughout the prairie provinces and southern Nova Scotia when people are treated by neighbours to Christmas cake and cookies made at one of a plethora of baking parties after belsnickling – a game where groups dress up in costumes and ring doorbells around town to make you guess who they are. Nova Scotians have also made it a tradition to donate their best and biggest fir tree to Boston, as an annual thank you for the American city’s life-saving aid after the 1917 Halifax explosion.

In the USA giant red-and-white socks, often each embroidered with a family member’s name, hang from the fireplace to be stuffed with gifts, and Louisiana takes it a step further still to make sure Papa Noël doesn’t pass their stockings by on Christmas Eve. An impressive trail of bonfires is set up along the Mississippi levees to guide the good man, his flying reindeer and most importantly, his gifts, to the homes of local kids. During Puerto Rico’s Navidad period, children look forward most to the evening of January 5, when they’ll go outside and fill shoe boxes with grass. The boxes are put under the beds of parents and grandparents and in the morning they’ll contain sweets and presents from the Three Kings, who filled them after their camels happily chomped away the grass.

In the majority of Africa, Christmas is observed as a religious holiday and Church-going opportunity without a specific emphasis on presents. Countries that do include gift-giving, however small-scale, into their Yuletide rituals include Nigeria, Madagascar, South Africa, Ghana, Zimbabwe and Kenya, where Kenyans often see Santa ditching his reindeer for a Jeep, bike, or camel. Zambians have a tradition of bringing gifts to Church for the less fortunate and the hospitalised. 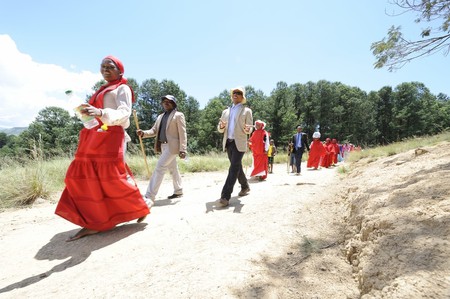 Treats for pets and courteous Inuit

Besides sending out seasonal cards by the bucketload and turning their homes into caves of Christmas cheer (including Advent calendars holding 24 tiny gifts), the Danish also traditionally present their animals with a seasonal treat – because what else did we expect from the part of the world? Presents are delivered by the Julemanden (Yule Man), a Santa-like figure that relies on nisse, a type of fortune-bringing gnome, to assist him in his gift-giving tasks. Children often send their wishlist in a letter to his Danish address, namely ‘1 Reindeer Way’.

People make sure to give the nisse (called tomten in Sweden) a steaming hot bowl of rice pudding with a melting slice of butter on top. All three countries plus Greenland also pay special attention to their hospitals and nursing homes, where residents are treated to pepparkakor (gingersnap cookies similar to Dutch and Belgian speculoos) by St. Lucia, a young girl who was martyred for her Christian faith but spends the Yuletide days handing out treats while wearing a crown of candles. Like Canada, Norway has made it a habit to gift one of its champion firs to another foreign city. For Oslo, that’s London, and this arboreal beauty traditionally gets a prominent place on Trafalgar Square.

More westward, Greenlanders play a big role in worldwide Christmas joy (even if they have to ship over their trees from Denmark due to the cold). Seeing as their freezing country is often considered the home of Santa and his famed workshop, children from all over the world send letters that go into the jolly man’s ginormous red mailbox in capital Nuuk (Santa Claus, 2412 Nuuk, Greenland – you might get a reply!). As for the Inuit, they head on over to each other’s homes to exchange brightly wrapped presents that will often be sleighs or a pair of quality mittens. On Christmas night it’s customary for men to get women the gift of service by waiting on them hand and foot while the kids go around carolling from door to door until they buckle under the weight of all the hard-earned gifts and candy.

Christmastime in Australia equals particularly sunny days, so locals see it as the ideal opportunity for communal barbecues, copious breakfasts in the yard and all-around outdoor feasts with family and friends. Food-themed hampers that can be shared are a much appreciated gift to take to these gatherings, from gourmet cheese baskets to mounds of exotic fruits and mouth-watering chocolates. 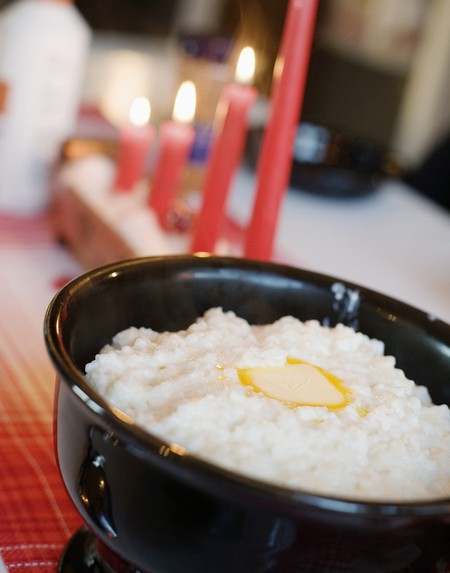 With only a small fraction of Asian countries being mainly Christian, there usually isn’t much talk of Jesus or his manger – with the notable exception of the Philippines and its majority Catholic population – but that hasn’t kept places like Japan, Hong Kong and China from embracing the gift-giving spirit. Shopping malls everywhere are lavishly decorated, South Koreans exchange gifts and often money, and China’s younger generation has developed the curious custom of buying each other apples wrapped in pretty, colourful paper. Besides being a more economical present, the Chinese name for apple is similar to the one for Christmas Eve, plus the fruit symbolises good fortune and peace.

It has also become a bit of an alternative Valentine for some, especially the Japanese, with lots of couples seizing the cozy atmosphere for googly-eyed walks and the exchange of small tokens of their love. Filipinos on their part have a tendency to bombard each other with Christmas cards and lovely bouquets of Christmas flowers.

The birth of the piñata and letters to baby Jesus

Costa Ricans call it La Noche Buena: the night of Christmas Eve when the Holy Child drops off gifts after Midnight Mass. Many children look forward to this moment all December long, when the crib at their home’s pesebre (nativity scene) is no longer empty but occupied by baby Jesus, who has scattered presents underneath the tree. Ecuadorian and Colombian kids write letters to baby Jesus in the lead-up to the big day to describe how good they’ve been and which presents they have their sights on.

Brazilian children will put socks near the window to find Papai Noel – who often wears a red silk getup to better bear the sweltering temperatures – has exchanged them for a gift. Brazilians of all ages have become fond of Secret Santa or Amigo Secreto and have taken the game to another level: all throughout the month, friends get small gifts to each other by using a fake name and only reveal their identity on Christmas itself.

In Mexico it rains candy from star-shaped piñatas every night from December 16 to 24, during nine consecutive parties known as Las Posadas at the houses of different locals. Symbolising the seven deadly sins with its seven points and the rejection of those by breaking the star, this is the piñata’s original use before it got co-opted as a fun birthday game. The real present payday for kids in Mexico’s southern region comes in January though, when los Reyes Magos (the Three Kings) come to town. 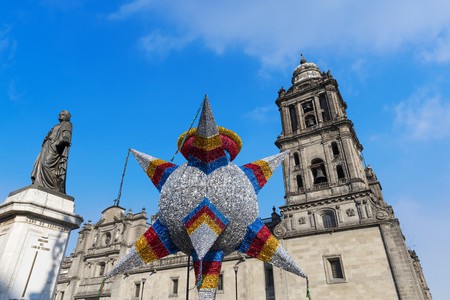 In most of Eastern Europe, kids have to sing for their supper when it comes to presents. In Russian households, bags of candy are usually within eye’s reach as they recite a poem or sing a song for Grandfather Frost in exchange for the goods. And while Hungary’s Christmas is a heart-warming affair with angels bringing the tree and baby Jesus in charge of presents, things in Poland and Latvia are less mushy (though still magical); kids again need to sing a carol before gifts can be received, and in the latter country this routine can even expand with little dance routines and poem recitals by heart. In Yugoslavia, kids take the reigns and leave their parents little choice; on the second Sunday before Christmas they use a belt, scarf or really anything they can find to tie their mother up by her legs. If she wants her freedom back, she’ll have to deliver on the presents front. On the Sunday before Christmas they play the same trick on their dad, who, peculiarly, never sees it coming.