Bill Murray Is Releasing a Classical Music Album This Year 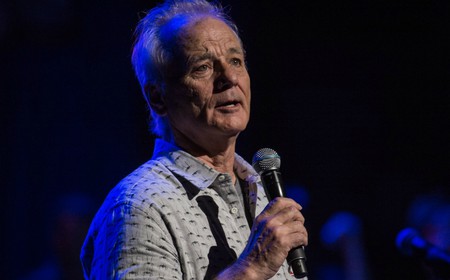 For some, like Justin Timberlake, the music-film crossover comes naturally; for others, like H. Jon Benjamin, things don’t go quite as smoothly. While Bill Murray has already proven time and again that he’s got the chops to hold a tune on his own, the Ghostbusters star is entering new territory with his “New Worlds” project, scheduled to release a classical album this August.

“New Worlds,” a program of songs and literary readings paired with chamber music led by the cellist Jan Vogler, explores “themes of American history and identity.” As The New York Times reports, while Vogler, along with violinist Mira Wang and pianist Vanessa Perez, plays Bach, Schubert, and Piazzolla, Murray will read passages from the works of greats like Ernest Hemingway, Walt Whitman, and Mark Twain. Murray will also sing George Gershwin’s “It Ain’t Necessarily So” and Stephen Foster’s “Jeanie With the Light Brown Hair,” as well as songs from West Side Story and Van Morrison.

Murray described the group’s chemistry to The New York Times after one rehearsal:

Along with the upcoming album release, Murray and his team plan to take “New Worlds” on the road, starting with their United States premiere at Festival Napa Valley in California on July 20, and then followed by a North American tour that includes Toronto’s The Royal Conservatory on Oct. 13 at New York’s Carnegie Hall on Oct. 16.