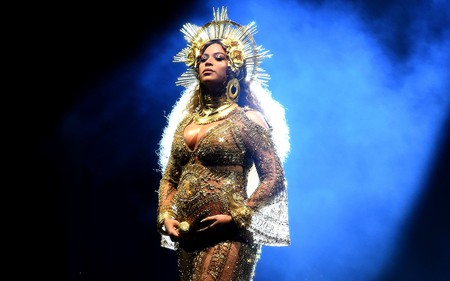 Beyonce has given the world its first glimpse of her twins in the most Queen B way ever – in a colourful photoshoot on social media.

The ‘Crazy in Love’ singer posted a picture of herself with her babies on her Instagram page, to celebrate them turning one month old.

She also confirmed rumours the twins, a boy and a girl, were called Sir Carter and Rumi.

The mother-of-three, 35, can be seen in the snap, wearing a turquoise veil and a purple dress, standing in front of an arch of flowers as she tenderly embraces the twins, and looking every bit as regal as we’ve come to expect from Queen Bey.

Both of them are asleep (we get it – it’s hard working being a baby) and look absolutely adorable. The caption reads: ‘Sir Carter and Rumi 1 month today’.

The image has received millions of likes since it was posted this morning, and has echoes of Beyonce’s last photoshoot, where she announced her pregnancy.

We would like to share our love and happiness. We have been blessed two times over. We are incredibly grateful that our family will be growing by two, and we thank you for your well wishes. – The Carters

In that shot, the singer was pictured caressing her baby bump as she kneeled in front of a similar floral arrangement wearing a green veil.

She and JAY-Z are also parents to five-year-old daughter, Blue Ivy, but the couple had not confirmed any details about the twins until now.

Her father Mathew Knowles tweeted on June 18: ‘They’re here!’ and ‘Happy birthday to the twins’. However, Beyonce’s post suggests they were actually born on June 14.

Rapper JAY-Z recently addressed rumours he was unfaithful on his latest album 4:44.

He raps about his regret and fears about losing his family on several tracks on the LP, which is exclusive to Tidal subscribers.

The musician also mentions how the birth of Blue Ivy changed his perspective.

Jay-Z will be headlining V Festival next month.