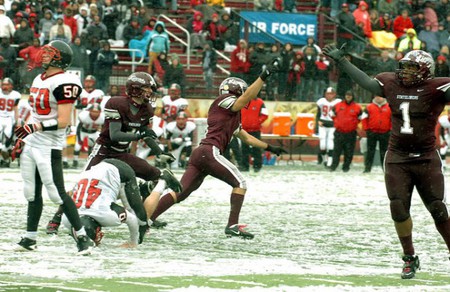 Phillipsburg beat Easton 3-0 in 2010 thanks to an overtime field goal. | © LehighValleyLive

Turkey. Stuffing. Mashed potatoes. Pies. Family. Friends. Football. These are some of the things associated with Thanksgiving in the United States.

Football has been played on the holiday since 1869 in Philadelphia. While most people associate Thanksgiving football with the NFL’s slate of games, there are many high schools competing against each other that morning before families and friends sit down for dinner.

This is where it all began. New London and Norwich Free first played in 1875 and this series is the oldest high school football rivalry in the United States. The series has seen everything from cheating faculty to biased officials to vandalism and then some. There’s even a book out on it.

“This game stands alone,” former New London coach Duane Maranda told The Norwich Bulletin. “It means so much to both teams, whether you’re winless or qualified for the playoffs, or need a win to qualify. The game is its own little season.” 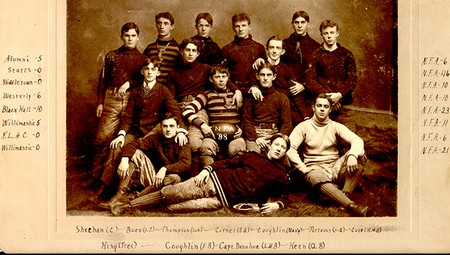 Boston Latin is the oldest school in the country, being established April 23, 1635. English was founded in 1821. The schools started playing against each other on Thanksgiving in 1887 at Harvard University. The game is the longest continuous Thanksgiving Day rivalry in America.

“This is their legacy, Thanksgiving. Nobody’s going to ask how you did the other 10 games (of the season),” former Latin coach John McDonough told The Boston Globe. “They want to know ‘Thanksgiving, how’d you do against English?’”

Calvert Hall and Loyola first played Nov. 12, 1920. The “rivalry that exists between them had made the contest the most important on their schedules,” The Baltimore Sun reported the day after Calvert won 9-3. The game eventually evolved into the Turkey Bowl and is the third-oldest rivalry in the Baltimore area.

“How many teams around the country can say that they have played for 100 years against [a rival]?” Calvert Hall football alum Tom Bateman told ABC2. “It’s Army-Navy for us. It’s our Super Bowl. Nothing else matters but that game.”

This annual game that began in 1905 features two of the best and most successful teams in their respective states. Easton, located in eastern Pennsylvania, is the second winningest team in the state. Phillipsburg, just across the Delaware River in western New Jersey, is the Garden State’s winningest team. This rivalry has a book on it out, too.

“There’s no (better) time to play it than that morning,” Easton coach Steve Shiffert told Lehighvalleylive.com. “I tell everybody that’s why the Indians and Pilgrims got together. They thought there was a football game that night.” 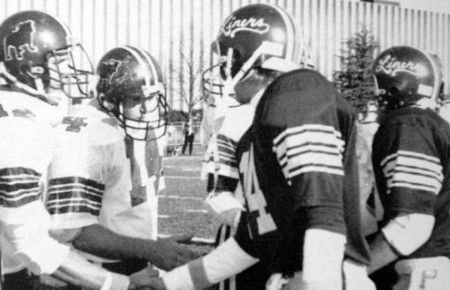 The 1988 meeting between Easton and Phillipsburg was broadcast on ESPN. | © Lehighvalleylive

This is the oldest high school football rivalry in New York. Fordham Prep and Xavier first played on Thanksgiving in 1905, but playing on the holiday didn’t become an annual schedule staple until 1927.

“I coach 11 games a year, and the season is important,” Xavier coach Chris Stevens told The Wall Street Journal. “But if you talk to alumni, they could have less about going 0-10, as long as we win on Thanksgiving.”

The Turkey Day Game between these schools located west of St. Louis began in 1907. The winner receives the Frisco Bell, while the loser is sent home with the Little Brown Jug. The two communities host a plethora of events leading up to the game, including a Friendship Dance that began in 1939 — a gesture of friendship between the two schools. There is a book about this game, too.

“If you’re not winning the state championship you’re better off winning Turkey Day,” former Kirkwood coach Matt Irwin told STLToday.com. “You get to finish with a win.”

The turkey wishbone isn’t the only bone being fought over on Thanksgiving. San Jose’s two oldest public schools have been battling for a large steer leg since 1945. The rivalry, which started in 1943, became known as the Big Bone Game two years later after a San Jose HS student found the bone in his father’s butcher shop. He thought it would make a good trophy for the rivalry game, and after both schools agreed, it became priority No. 1 for both football programs.

“A lot of us growing up, we came to these games as kids,” former Lincoln lineman Juan De La Cruz told The Mercury News. “It was a dream come true to play in these games. It means everything to us, man.”

Separated by a mere two miles, these two small schools in southern New Jersey first played against each other in 1902. Playing on Thanksgiving became a staple 20 years later in 1922. The winner of the annual Turkey Day game receives the Mayor’s Cup.