'Battle of the Sexes' Is More Than a Tennis Movie 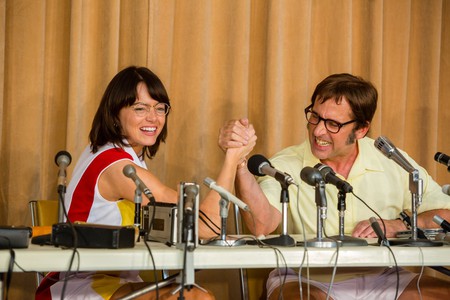 Bobby Riggs was on top of the tennis world during the 1930s and ’40s. As a 21-year-old amateur, Riggs won the 1939 Wimbledon triple crown (men’s singles, men’s doubles, mixed doubles). He won the U.S. National Championships (now U.S. Open) later that year and was a finalist at the French Open.

Riggs, despite his gambling debts and marital issues, thought highly of himself—and of men’s tennis—even claiming women’s tennis was inferior. In his 50s, Riggs, a chauvinist and hustler, challenged female players, first defeating Margaret Court 6-2, 6-1, before setting his sights on world No. 1 Billie Jean King.

King refused Riggs’ challenge, but eventually accepted the offer to compete in what was dubbed the Battle of the Sexes, a $100,000 winner-take-all tennis match. King, 29, said at a press conference during the U.S. Open the thrill wasn’t beating Riggs, 55, but “the thrill was exposing a lot of new people to tennis.”

King, who was struggling with her own off-the-court issues, including her sexual identity—she was married, but began an intimate affair with secretary Marilyn Barnett—defeated Riggs 6-4, 6-3, 6-3 on Sept. 20, 1973, in the Astrodome in Houston, Texas. 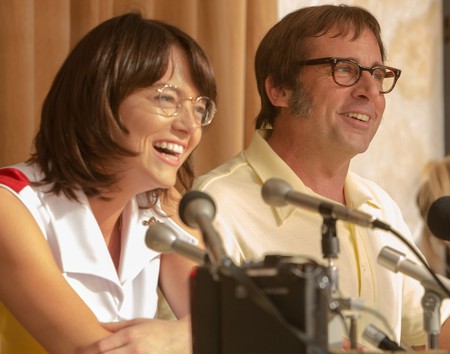 The event, both athletes’ personal struggles, and the fallout afterward is the subject of the film Battle of the Sexes, out now in select theaters and everywhere from Sept. 29.

“It’s not just a tennis film,” King said. “It’s about what the match was about—it’s about social change, what was going on and at least where I wanted life to go… It’s also about inner struggles we all go through, obviously me with my sexuality, and Bobby trying to cling onto his marriage and his gambling problems.

“I hope this movie is relevant, helps younger people know the story, but more importantly, what are we going to do with now and the future? I hope it will help everyone in some way. Even if one person becomes more comfortable in their own skin from this, then it’s going to be really helpful.”

“I could never live up to Billie Jean King, so I had to take that off the table,” Stone said. “I knew the best I could do was study her as much as possible and try to capture her essence more than anything; her spirit and try to bring it to life in a realistic way and not do an impression of someone who is truly inimitable.” 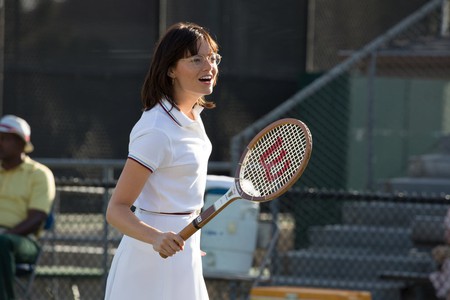 Stone, who won an Academy Award for La La Land (2016), said she had heard bits about King and the Battle of the Sexes throughout her life, but it wasn’t until taking on this project and spending time with the iconic tennis player and activist that Stone was able to get the “nitty-gritty details.”

King said she was impressed with the quality of the film, saying it captured the “essence of that time” not only in her life, but Riggs’ and society’s in general. She commended the entire production.

“Emma captured what I was feeling so well; it’s frightening that somebody can do that, it’s really eerie actually,” King said with a smile. “Steve Carell was so wonderful and so accurate and so authentic with the many layers of Bobby Riggs; you see the back story and really understand his personal life so much better and see the challenges he was going through.

“… It’s really overwhelming, it’s quite something. I hope you all get a chance to see the movie.”