Baseball’s Place at the Heart of American Culture 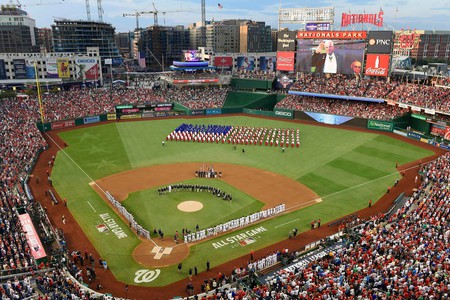 Major League Baseball (MLB) has been a staple in American culture for more than 100 years. Culture Trip analyzes baseball’s influence and significance in the US.

Like millions of Americans, Paul Dibiasio has been a baseball fan his entire life. Dibiasio, who grew up playing the sport, has an appreciation for it all – from the intricacies of baseball’s subtleties like pitching/hitting matchups to the jaw-dropping mammoth home runs. It’s no surprise given how interwoven baseball has been in US culture for the past century.

MLB was founded in 1903, the same year Henry Ford ushered in the age of the automobile when he established the Ford Motor Company during a period where America became a global power. The league, which was founded after the National League (1876) and American League (1901) merged, became an equally crucial part of the country’s identity as the American car. America’s auto industry still has a place in the nation’s favorite pastime today, as does an increasingly large role for the US military.

Professional baseball in North America started out slowly, highlighted by the Dead-ball Era – where pitchers like the iconic Cy Young dominated and scores were low. The sport was shaken by the Black Sox Scandal in 1919 when eight members of the Chicago White Sox fixed the World Series; one of the biggest scandals in American sports history.

Baseball rose in popularity after that thanks to players like Babe Ruth and a resurgence in offense. But hard times followed as a result of the Great Depression and World World II, the latter interrupting the careers of players including Joe DiMaggio, Ted Williams and Stan Musial. Jackie Robinson broke baseball’s color barrier in 1947. The league expanded in the years after, and new stadiums and artificial turf were later integrated into the sport.

With each generation, a new set of stars dominated and gave everyone – those who grew up on Ruth and those just introduced to the game – a reason to watch. Dibiasio, who was at the 2018 Major League Baseball All-Star Game in July at Nationals Park in Washington, DC, attended the 1969 MLB All-Star Game at the old RFK Stadium when he was 11 years old.

“It’s nice to experience it again and it didn’t disappoint,” he says. “Back then I didn’t know it but there were some great players – (Harmon) Killebrew, Willie Mays, Willie McCovey and players like that. I’m sure I’ll look back at some of these players and feel the same way.”

That’s the thing about baseball – aptly deemed America’s pastime – there’s always a new crop of stars to hitch your wagon to. Hometown bias aside, if you can appreciate the game for what it is, like Dibiasio does, it keeps you coming back generation after generation.

The Steroid Era came to baseball in the 1980s and ‘90s where players including Mark McGwire, Barry Bonds, Jose Canseco and Sammy Sosa utilized performance-enhancing drugs (PEDs) for superhuman-like strength in races for the most home runs.

Despite declining attendance and the rise of the National Football League (NFL), baseball still holds a place in many Americans’ hearts as Mike Trout, Bryce Harper, Aaron Judge and Jose Altuve reign supreme.

“I love baseball; I played it my whole life so I’m still really connected to it,” says Ryan McCrinnon of Washington, DC. “It’s a really laid back atmosphere; you just come hang out at the ballpark, watch the game, eat some good food and have a really good time.”

It’s this concept of creating a lifelong fan from a young age that the league and sponsors, including Chevrolet, are trying to focus on. Chevy, a sponsor of MLB since 2005, is active in the sport’s tentpole events, including the All-Star Game, but also has grassroots initiatives around the country. 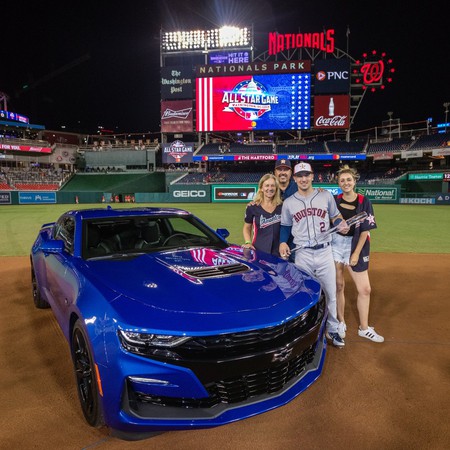 Chevy has donated more than 150,000 equipment kits and has raised more than $36 million as part of its youth baseball program in partnership with local dealerships. The American car company has also offered 1,800 free skills clinics to the public.

“It would make sense for us to be the official partner of America’s pastime,” says Ben Honingford, Assistant Manager of Chevrolet Experiential Marketing & Brand Partnerships. “It wouldn’t make sense if it was Toyota, for example. Baseball is a family event, spending time with the kids, and we’re an all-American brand, accessible to everyone.”

Following the September 11 attacks, baseball became a vehicle to drive patriotism. As more and more people proudly displayed US flags and increased their support in the armed forces, American sports expanded their involvement as well. Giant on-field flags and fighter jet flyovers traditionally reserved for the Super Bowl became commonplace across sports, particularly in baseball. 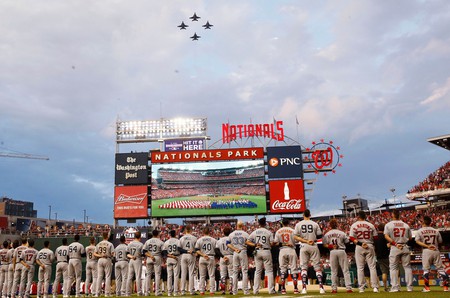 That patriotism and support of America’s armed forces was at its peak in the nation’s capital this summer. Members of DC Community Choirs donned red, white or blue in forming a large American flag in the outfield of the All-Star Game while singing the national anthem. Thirty Medal of Honor recipients were honored and saluted before the game while jets flew over the stadium to the awe of more than 43,000 in attendance.

MLB and its partners also hosted the first Armed Services Classic and a home run derby pitting each branch of the military against one another in the events leading up to the Midsummer Classic.

Though appreciative of those who risk their lives to defend our freedoms, some feel the excessive military presence may detract from a sporting event. Others, including Dibiasio, feel otherwise.

“I think it’s great,” he says. “I don’t think we do enough for our armed forces. My brother was in the military for his whole career and I have nothing but respect for everything he’s done and for all the people who fight for this country.”

Travel and accommodation provided by Chevrolet