Athlete-Owned Restaurants Around The World 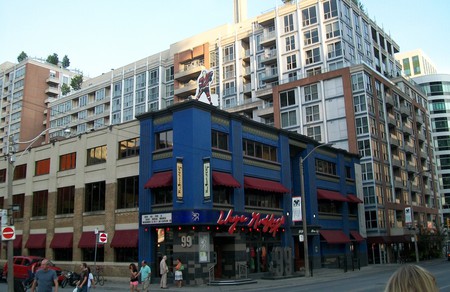 An exterior view of Wayne Gretzky's in Toronto | © WikiCommons

Whether they’re trying to capitalize on their fame, make a little extra cash or looking for something to keep busy with after they retire, many athletes around the globe have transitioned from the playing field to the restaurant business.

Soccer legend Diego Maradona is one of the more recent athletes to make the move with Diego Cafe opening in October 2016 in Abu Dhabi. We take a look at some of the other restaurants opened by professional athletes.

Opened in 2011, Usain Bolt’s Tracks and Records “delivers a unique Jamaican dining experience, breaking the barriers of a casual eatery and sports bar & lounge.” There is a casino adjoining the restaurant and a nightclub called Fiction adjoining that.

Even the kids love hanging out at #tracksandrecords ! Repost>>> 📷: @wbogle

Opened in 1998, Brett Favre’s Steakhouse highlights the legendary quarterback’s accomplishments on the field as well as his southern upbringing. Not surprisingly, there is a lot of yellow and green (Green Bay Packers’ colors) strewn about in the decor and memorabilia.

Wayne Gretzky’s isn’t just a hockey-themed restaurant — it’s a restaurant, sports bar and rooftop patio with the Great One’s personal collection of memorabilia is on display throughout. The sports bar has 40 HD TVs showing sports “all the time.” It’s also within short walking distance from the Air Canada Centre and Rogers Centre.

Opened in 2004, Arnold Palmer’s Restaurant serves more than just the iconic golfer’s famous iced tea/lemonade drink combination. Like Gretzky’s, this location is more than simply a restaurant — it has a restaurant, Arnie’s Pub and a patio. Check out the highlights and memorabilia all throughout of one of the game’s best.

Opened in November 2009, this chic Italian restaurant is co-owned by former Manchester United defender Rio Ferdinand. Rosso Restaurant is currently undergoing renovations and is scheduled to reopen on Jan. 26, 2017. It was named Restaurant of the Year at The Food Awards England 2016.

Don Shula and success go hand in hand. The National Football League’s winningest coach and two-time Super Bowl champion is the only coach to lead a team (the 1972 Miami Dolphins) to a perfect record. He opened the first Shula’s Steak House in 1989 in Miami Lakes, Fla. Since then, it’s done nothing but succeed leading to Shula’s Steak House LLP in 1994 and locations across the United States.

This New York City sports-themed restaurant/bar/lounge is named for Walt “Clyde” Frazier, one of the most beloved New York Knicks players of all-time. Food aside, the locale also boasts a free throw basketball court for anyone willing to test their skills.

Our Free Throw #BasketballCourt is wonderful #entertainment for a kids #party. Plan your child’s next #birthday and you can have a coach teach them some fundamentals of #basketball.. It probably won’t be #Clyde but how about a close second! #nba #nyc #foodie #midtown #nba #clydefrazier A photo posted by Clyde Fraziers Wine and Dine (@clydefraziers) on Jun 28, 2016 at 10:12am PDT

The first Billy Sims BBQ opened in 2004 in Tulsa, Okla., by 1978 Heisman Trophy winner and NFL running back Billy Sims and his business partner. Today, the franchise has expanded to 44 locations in Oklahoma, Missouri, Michigan, Texas, Kansas and Arkansas. It was recognized by USA Today as part of The USA’s best barbecue chains in 2014.