Around the World in 60 Music Festivals 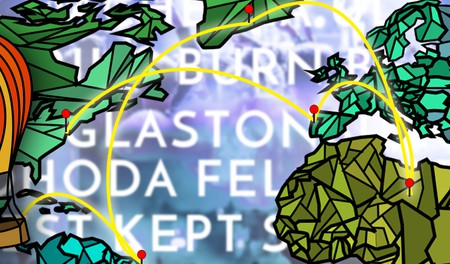 Whenever Coachella‘s two weekends arrive, a rejuvenating spirit fills us once again as it does this time every year: music festival season has returned. As lineups are slowly revealed, we all must tackle the onerous task of deciding which events are worth the ticket prices.

Selecting the right festivals is crucial: Does the lineup match your musical interests? Will the attending crowd line up with your personality? Will the event offer you broadening life experiences beyond a healthy crop of performances?

With hundreds of music festivals located all over the world, there is so much to see and hear, but with many of them overlapping in dates, and a budget in mind, it’s obvious that seeing them all in one year is impossible.

However, it is achievable to catch a handful of the best festivals that meet your cravings and take you to all corners of the globe. Below, Culture Trip’s Music Editors, Ann Lee and Ryan Kristobak, have curated six themed lists of 10 festivals that will have you jetting from country to country through the rest of 2017 (and some into 2018) for the most extraordinary musical year of your life.

Come on. Even if you only have a passing interest in music, you’ve heard of these ones. Coachella, Glastonbury and V Festival are as famous for the celebrities that rock up in their pristine Hunter wellies every year as for the big names headlining. Some you really need to do at least once in your life. If you’ve not waded through oceans of mud, got lost finding your friends and woken up hungover in the Green Fields hugging a complete stranger at Glasto, you’ve not lived as far as we’re concerned.

For those who have ventured out to the playa in Nevada’s Black Rock Desert, it’s clear that Burning Man is an experience unlike any other offered in this world. Yet, for those seeking the city’s DIY, healing, wild, creative spirit on a smaller scale, these festivals – from offshoot AfrikaBurn to Mexico’s surf and yoga celebration Genius Loci Fest – just might provide you with what you are looking for.

If pop doesn’t do it for you, these festivals will fill your inner indie-kid’s heart with joy. True, Radiohead, The Weeknd and Arcade Fire seemed to have been booked as headliners for most of them but these are packed full of alternative bands and rising stars. Barcelona’s Primavera Sound is surely one of the hippest festivals you can go to, while music lovers can extend the traditional summer fun by heading to South East Asia later in the year for Clockenflap and Wonderfruit.

Sometimes it’s more about the culture than it is the music. If you are looking for a chance to learn a new way of life just as much as some good tunes, this path was made for you. From the Malaysian rainforest to a camping excursion along the chilly hillsides of a volcanic Icelandic island and Mexico’s Dia de los Muertos, prepare to immerse yourself in events you will find nowhere else.

If there’s one thing music festivals should be about it’s the dancing. EDM, techno, house, drum’n’bass, dub… take your pick. Here’s a whole route to take you from Europe to Asia via Morocco if you fancy chasing the beats that’ll keep you throwing mad shapes long into the night. Sonar offers more edgy acts while Ultra Japan has its fair share of mainstream crowd pleasers. Get your glow sticks ready – it’s time to rave your way around the world.

Long before the days of Instagramming, you and all your friends standing in front of Coachella’s giant astronaut wearing flower crowns, before tanks with pot leaves, aliens, and pizza on them, there was jazz. If you’re looking for a respite from the drug-prone, bass-dropping festivals that dominate headlines, this route takes you from from the birthplace of this great American musical tradition for its annual celebration to some of the world’s most beautiful locations until coming to a conclusion in the Cuban capital.