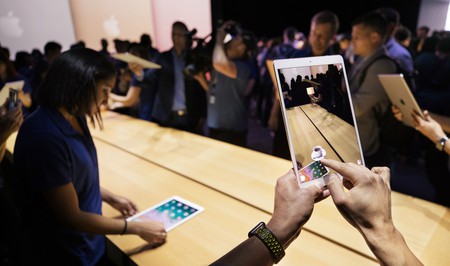 Attendees of WWDC try out the new ARKit, bringing high-quality AR experiences to iPhone and iPad.

Earlier this month Apple announced its augmented reality platform ARKit, which will be built directly into the company’s operating system, iOS. Since then, a number of demos have been released, showcasing the potential of augmented reality on Apple’s devices.

The ARKit platform will be part of Apple’s next big update, iOS11, and the previews of some of the apps which are going to be available are already being shown off in videos.

One of the more useful apps is the AR Measure, shown below. The app uses the phone’s camera to measure distances, and projects a measuring tape on screen for measurements.

A more showy example of what ARKit can do is the SpaceX Falcon 9 demo, which shows Elon Musk’s reusable rocket land in a swimming pool. This demo may not have any real use, but offers a glimpse at the power of the AR experiences being built. It’s also been noted that these types of demos are being released just weeks after the ARKit was made available to developers, which suggests the kit is easier to use than some competing platforms.

Science lovers can also view scenes like a moon landing in #D inside their own homes. This video shows how you can get closer to the hologram to get more detail, and walk around the subject of the app at your will.

One of the most exciting uses of AR on Apple devices will be in gaming, where developers will attempt to bring the thrill of playing a video game into the real world. Following in the footsteps of Microsoft’s Hololens, developers working with the ARKit have focused on Minecraft. The video below shows just how cool the game can be when overlaid onto reality. Minecraft is all about building things, so being able to walk around and inside your creations adds a significant level of enjoyment to the game.

Another area being explored by developers is virtual tours. One example shown below is a tour of Vincent Van Gogh’s bedroom, which is superimposed onto a real surface. Users simply have to move their phones closer to the hologram in order to see it in more detail. These types of use cases could theoretically be expanded to involve full museums inside your home, which you can walk through as if you were there.

Drawing and sketching apps are expected to be commonplace on Apple’s augmented reality platform as well. These apps will allow you to draw 3D images, and put them over real life scenes. You could draw a whole host of shapes, filling a room with your imagination.